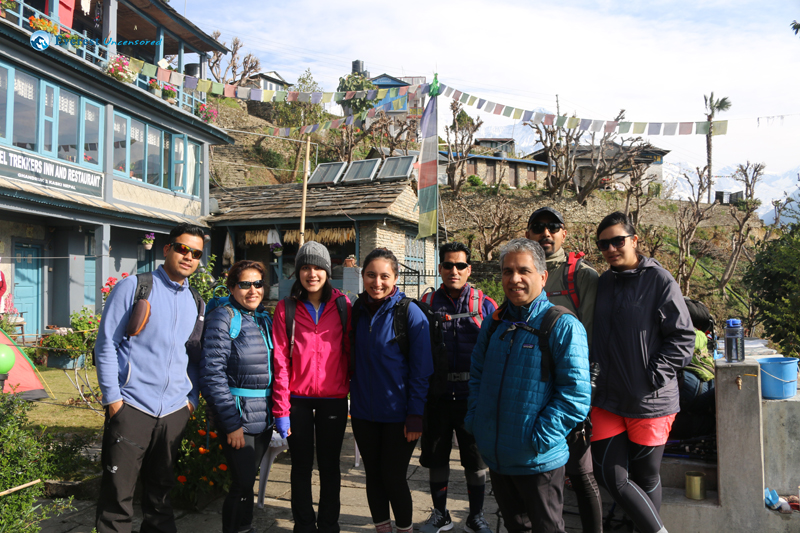 We started our trip on March 13 with the seven-hour drive to Pokhara, where we spent the night at the Barahi Hotel with plans to begin the hike the next morning. The initial aim of the trip was to reach Annapurna Base Camp, but we found out shortly before leaving Pokhara that a severe snowstorm on the mountain had rendered the base camp temporarily closed. We decided to go forth with our original plans and see how far we could get on the circuit before the weather stopped us.

We woke up on the morning of March 14 in Pokhara and after breakfast drove about an hour to Nayapul. We then rented a car to drive us through the winding, bumpy forty minute road up to the Bikash Danda. At this point it was early afternoon and it had started to rain so we took refuge for half an hour in a teahouse before beginning the day’s short hike: about a half hour climb up to the village of Ghandruk. The road was mostly stairs, steep at some points and flatter at others. Upon arrival in Ghandruk, we had walk an additional ten minutes up through the village to reach our lodgings for the night: Hotel Trekkers Inn.

After a good night’s sleep, we woke up the next morning ready for the first real day of hiking, from Ghandruk to Chhomrong. The hike started out flat amongst fields and through smaller villages but eventually, at around noon, we reached a descent down to a river (Kimrong Khola). The downhill climb was steep and winding and it took about an hour and half before we finally were crossing the long bridge across the river. The hike then quickly became an uphill climb as we had to account for all the altitude lost coming down the mountain. This was definitely the most arduous part of the day, as we trudged up the rocks and through fields. The ascent took a couple hours and it was about 4 pm when we reached Chhomrong.

We reached Chhomrong Guest House, our home for the night, and settled down in their common room for dinner. The temperature had dropped in the evening and we were cold even within the inn, as environmental laws did not allow gas heating in the area. After a dinner of soup and noodles, we woke up the next morning to a beautiful view of the mountains. We could clearly see Annapurna, looming, and the traces of the snowstorm were clear as all the mountains were coated in white.

We debated during the morning what to do next with our trip: Annapurna Base Camp was still closed and the effects of the snowstorm were reverberated through a few stops down from the base camp. It was decided that we would make our way back down, hopefully all the way to Pokhara by night fall. While the goal was Pokhara, we still had a long day’s hike ahead of us to make it down to Siwai through Jhinu, from where we would take a car again.

The hike began with almost two hours of sharp descent; we were walking down mostly stairs constructed from large rocks, although the route straightened out into a flat, dirt paths winding on the sides of the mountains at a few points. While we had bright sun early and mid-morning, by noon a light drizzle was accumulating and the skies began to darken. The long downhill ended as, once again, we reached a river and crossed a precarious wooden bridge.

From this point, the hike became a sudden upwards climb- we came upon a scene where the looming, fallen trees from the 2015 earthquake had grown into the ground but the cascade of the avalanche was still etched into the mountainside, which created an odd sorts of scene.

From this point, the hike became a sudden upwards climb- we came upon a scene where the looming, fallen trees from the 2015 earthquake had grown into the ground but the cascade of the avalanche was still etched into the mountainside, which created an odd sorts of scene. The ascent opened out of the forest into a frighteningly narrow path along the side of a cliff, with the rocks on the edges crumbling away and what seemed be a hundred meter drop inches away! We crossed this point cautiously in early afternoon and then began the last part of the hike among lush green fields with huts at regular intervals. Our aim was the reach the village of Siwai from where we could take a car to Nayapul, and then to Pokhara for the night.

It was at this point in the day that the rain really began to pick up and after about two hours of hiking in truly pouring rain, huddled in our rain coat, we decided to take shelter until the weather calmed. After a break we continued along for a while in the same sort of terrain: narrow, winding dirt paths carved out in the midst of villages and among forest that stretched for acres. While the rain had briefly gotten better, it quickly picked up again and morphed into a relentless torrent of hail. The bits of ice peppering us and their steady beating against the surrounding foliage effectively ended conversation as we trudged along in silence for another hour.

The last leg of our hike was a sudden climb up the side of a mountain which would lead directly to the road. This path was clearly carved solely out of the footfalls of other hikers so we had to scramble precariously up the wet rocks, although the climb was made better as the plants surrounding were all a beautifully lush shade of green from the freshly fallen rain.

This short fifteen minute ascent brought us to the wider road, although still inaccessible by car. We walked an additional half an hour before finally reaching the main road, where we met our car and were done with the hike! It was almost 6:00 pm when we got in the car and drove the bumpy road to Nayapul again. From Nayapul, we met our Deerwalk van and drove into the night to Pokhara, where we stayed for the next two nights.

124 thoughts on “Trek To Chhomrong”