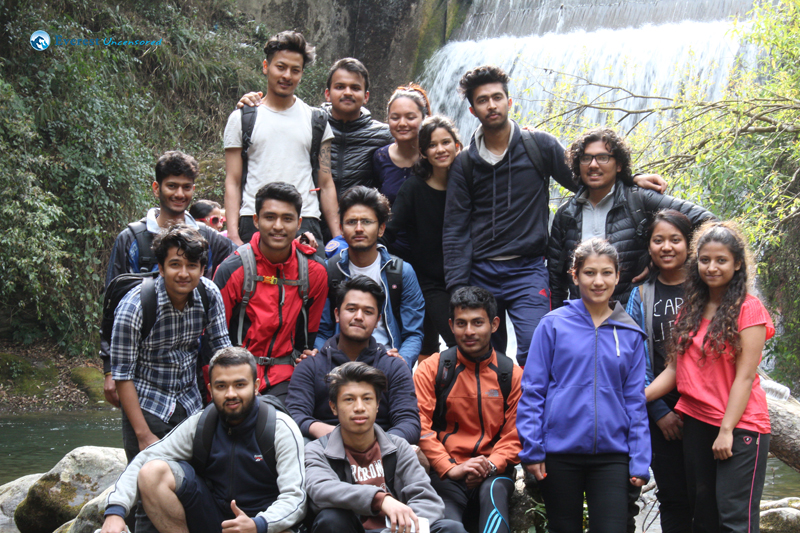 On 19th of March, Hiking and Outdoor Activities club organized one day hike to Sundarijal via Budanilkantha. The 6 hours hike was a beginner level hike with straight, wide and easy paths. There were all together 18 hikers from all four batches of DWIT.

The hike started after a light breakfast at nearby tea shop popularly known as Mama ko Pasal. The team departed to the drop off point, Budanilkantha at 8:00 AM and started the hike at 8:30 AM.

We were accompanied by the local guide halfway through the hike as it was mandatory to have a guide to enter the national park.

We were accompanied by the local guide halfway through the hike as it was mandatory to have a guide to enter the national park.

The team finally reached the destination at around 4:00 PM and headed college for early dinner. Thus concluding the hike.

On the 19th of March, the Hiking club organized a hike to Sundarijal. Total of 18 students were scheduled to meet at the Deerwalk premises at 6:45 AM and reach the drop off point. But, due to some issues we decided to deviate from the original plan and went for a light breakfast at nearby tea shop popularly known as Mama ko Pasal. So, we set off for the drop off point at 8 am and reached our destination in 30 minutes. After reaching the drop off point, we bought the tickets to enter the Shivapuri National Park and were also asked to get a local guide to enter the park as our team consisted of more than five people. The guide gave us a short detail on what to expect during our hike and since the hike was very simple-beginner level hike there were thoughts of considering a different route but that was later rejected due to some technicalities.

With loads of hope of finding different rare and local animals and enthusiasm, we started the hike along with the guide.

As the hike was of beginner level, everyone was relaxed and were enjoying every bit of the hike.

As the hike was of beginner level, everyone was relaxed and were enjoying every bit of the hike. There were lots of photo session and jokes were being passed which created a jolly and entertaining environment. In about one hour of the hike we reached Nagi Gumba were we got to enter the gumba and a lot of photos were taken. After almost two hours of continuous hiking we stopped for refreshing snacks and after the refreshments, we continued with the normal pace to our destination.

Finally, we reached the Sundarijal dam in about another two hours and were we were mesmerized by the clean water and the fresh air around it. With another one hour of hike from the dam we reached the end of our hike and returned to the college. The hike came to the end with a delicious meal in the college. The hike was a break from the continuous workloads, exams and assignments so it was a very refreshing and enjoyable experience.

36 thoughts on “Hiking from Shivapuri to Sundarijal”