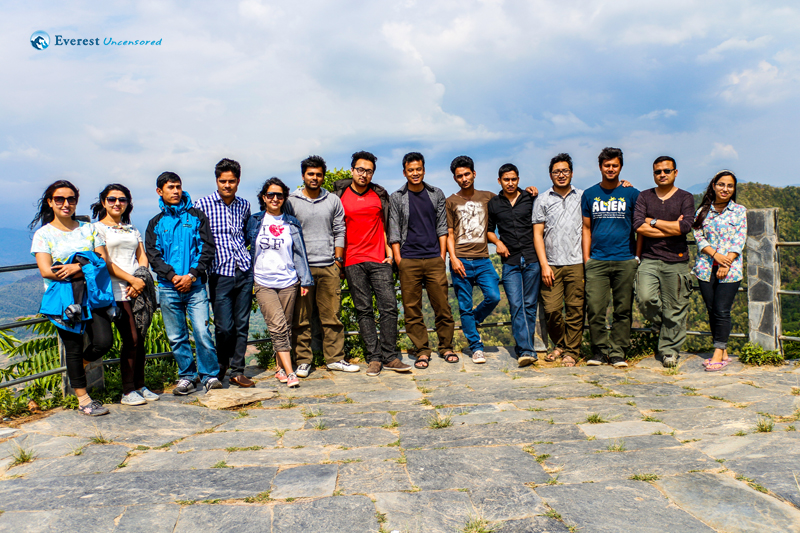 Travel, Hikes, hills, trails and roads, who doesn’t like. After all, life is a journey. 25th April 2015 was the date and Bandipur the place. Travelling is fun and the fun doubles when you have amazing people to travel with. We were all set and excited for a 2 day hike. The sky was cloudy and it had started to drizzle, but it hardly mattered as we were busy making the plans to make the trip memorable. We left office right on time and picked up everyone on the route and reached Kalanki at 8 A.M. We packed some food & water and left the valley. Our journey had begun with all of us sharing our excitements of the hike and how amazing it felt to catch a break from our daily routines. After travelling a few kilometers along the curves of Naubise we stopped for breakfast at a roadside hotel. We had breakfast, clicked a few photos and got back on the road. We were driving alongside the Trisuli River, playing games in our very own Deerwalk van and listening to the songs.

And it wasn’t just any normal Saturday when we slept late, had more than one bed teas. It was an exciting Saturday on the road and none of us had any idea about what nature had to offer us.

Suddenly, we felt the bus hit the bumps on the highway. At first, we ignored the jerks assuming it was the speed and made a few jokes about it. Soon it turned scary when we could see all the locals outside, panicking and grumbling about the earthquake.

When we reached Bimalnagar our slated hike start point, we got out of our vehicle and stood by the roadside as a precaution.

When we reached Bimalnagar our slated hike start point, we got out of our vehicle and stood by the roadside as a precaution.We were all worried as we were not with our family in that situation and we had no idea whether to go ahead and complete the journey or return back to the place we left in the morning. Then suddenly we felt the tremors and the road beneath us shaking. All of us tried to contact our families and check their safety status as the news about the valley was terrible.

We decided to travel ahead towards Bandipur as reaching a safe place was the only agenda we had then. We reached Bandipur, checked into our hotel. The excitement of the hike was all gone and the hike was the last thing we had in our mind. The only thing we did have in our minds was to contact our families, relatives, and friends and be assured of their safety. We roamed around to see the earthquake’s effect on the city. The beautiful city was totally shut; people were scared to stay inside their houses. Luckily the hotel we were staying served us lunch at around 3pm. We were unable to decide what to do and what was actually happening. Nature’s wrath was upon us and each other’s support and confidence was the only thing that kept us going at that situation. We travelled around the city for some time with earthquake being the only topic of our talks.

Upon dusk, we all stayed around each other giving each other the confidence that everything is going to be alright. The earthquake had taken out the power of the city and we spent our night under the dark sky. The night felt too long. The tremors repeated every hour and it looked like it had no plans to stop. Early morning at 5 A.M we travelled back to Kathmandu, we were all ready as we didn’t even take off our shoes for the whole night.

It was a silent morning with nothing much to talk about and we didn’t know what was waiting for us back in the valley. We reached Kathmandu around 11 A.M to a city which didn’t look like the one we had left the previous day. The city was broken, people were broken, rescue was ongoing, and it was all chaotic. It showed us how vulnerable we are to Mother Nature. Indeed, we wanted to make the trip memorable and we had made plans for it, but we were unaware of the fact that we had something else waiting for us. While we all were there merely playing our parts.

With a lot of deerpolitics, I got my name added to the hiker list for the two day hike that was scheduled on 25th April. Though I had already been to bandipur, I was excited about the two day hike. And it was my first two day hike from deerwalk. April 25, I got up early morning and boarded on the office vehicle from Thapathali. After everyone had arrived, the vehicle left Kalanki around 8 A.M.

We stopped on the way for breakfast. All the hikers were quite excited about the route. We were busy playing cards, cracking jokes.

We were about to reach our first destination “Bimalnagar” when we saw a part of a hill had fallen down. That was the moment when we found out that an earthquake had just shattered the whole country.

We were about to reach our first destination “Bimalnagar” when we saw a part of a hill had fallen down. That was the moment when we found out that an earthquake had just shattered the whole country.We still didn’t have any idea about how big the quake was or what damages it had done. We started to reach our parents, beloved ones. Though telecommunication was disturbed, we could contact our parents back home. Then suddenly there it was, the second quake, which scared everyone of us. Someone told us the “Dharahara” was down and showed us the pictures on the Facebook. We realized there had been a massive damage till now.

We didn’t go hiking, instead drove to Bandipur after the second quake. On the way we could see a few old houses had broken down. We reached Bandipur, checked into a hotel and decided to spend the night. We walked to the famous Tudikhel of Bandipur. Everyone was talking about the earthquake. Every five minutes some different news was coming. The trip which was supposed to be full of fun had turned into a trip full of fear and sadness. In the evening we went to a restaurant and we started to eat, drink and talk. Obviously the talks were about the quakes. The only good thing about that evening was our company and awesome poems by Kamal.

Except Sanu, nobody could sleep properly that night. Playing cards, a little drinking helped us pass the night. Early morning we started our journey back to the valley. We had no idea how the place had become. We didn’t even know what was the condition of the highway to Kathmandu. The highway was quite fine and we entered the Kathmandu valley around 11 A.M. We could see some houses had completely fallen down and some had been partially damaged. We got down at our respective stops and that was the end of the two day hike that I was so excited about. After watching all those videos of the earthquake and seeing all those terrified people from the videos, I sometimes ask to myself “Were we lucky that we didn’t feel the massive earthquake that shook our country?”

4 thoughts on “Trip to Bandipur”