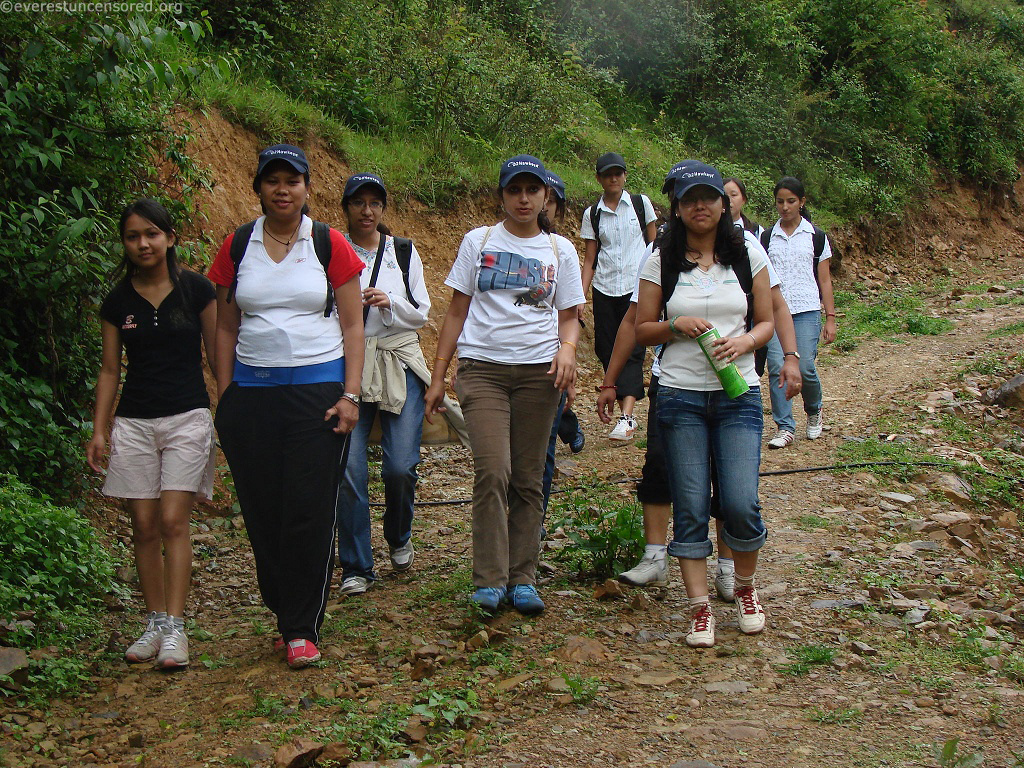 Rejuvenating the spirit
Thirteen ladies of D2 were all set to rejuvenate their spirits into one of the most cherished tradition named ‘Hiking’. The vivacious beauties congregated at D2 premises on a misty Sunday morning and left around 6:45 am with every intention to explore the adventures of the new trail. Since this was the first one-of-a-kind ladies hiking, we thought of enhancing the already unique event by coming up with a dress code. Everyone agreed to wear white tops to show uniformity. Cracking jokes, taking snapshots, and sightseeing along the way, we headed towards our destination.

We started our hike from Lele. After walking for some distance, we saw a school named ‘Sri Gupteshwori Nimna Madhyamik Bidhyalaya’ at a place called Nallu. We decided to stop by and spend some time there. We had a short interaction with the teachers and distributed stationery and chocolates to the students. Then we bid them goodbye and continued with our hike.
After a while we stopped for breakfast at a local tea. While waiting for breakfast, we came up with a brilliant idea to play “Dumb Charade” and had loads of fun. AnjanaS was victorious in the game and Brija was the funniest. She had to enact this movie called “Musafir”. By showing her white-colored T-shirt and her gesture of playing badminton, everyone guessed that the actor was none other but “Jeetendra” – some style he’s got!

After a hearty breakfast, we headed for Lamidanda, our ultimate destination. This was probably the toughest part of our hike because of the steep climb; and the simple fact that it was monsoon made it even worse. The route was teeming with blood-thirsty leeches. The frantic cries of the hikers were common after being attacked by the leeches but the parasites couldn’t deter the spirit of the thirteen ladies. Instead, we learnt a lesson from them: “Run for your life”. Whenever we stopped for some rest, the very sight of the leeches stretching their heads out to reach to us made us forget our tiredness and run further up. Brija was left wondering why the leeches stayed at places where people hardly tred. They might as well go and live in the cities.

Learning the lesson of the day, all the hikers ventured up the hill in the cool weather that further revitalized them. We finally reached the army barrack on the top of the hill. The open field and the view were both captivating. We were really amazed at the beauty of the place.
On the way back, we stopped to plant paddy as it was Ashad 15 – the day people sow grain in the country. The local population was warm and hospitable. We joined them to plant and plough, and sang folk and Ashare songs with them. So enthralling was their voice that some of us even started dancing to the tunes. They were also so delighted that they offered us some of their home made pickle. After spending about an hour in the muddy field, we headed back to Kathmandu.

Though we left the place, and the leeches, and the school, and the tea shop that took us back into our childhood, and the marvelous view, and the field planting with the locals, and the sweat behind, we carried with us memories to last for a life time.

After all, the pain and the loss of blood were definitely worth the experience.

0 thoughts on “Hiking from Lele to Lamidanda”