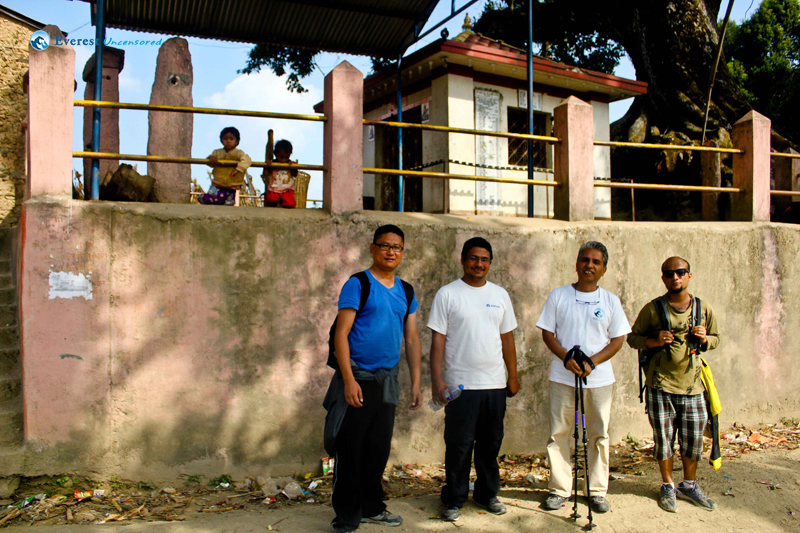 It was my great pleasure that I got a chance to join hiking on the fifth anniversary day of working at Deerwalk. I woke up at 5:00 am and packed my bag. I was picked up at Dadhikot Thimi at 5:36 am; Umesh was driving for us. After that, we went to Pramod Dai’s place to pick him up and then picked up Manish at New Road. On our way, we picked up Kapil from Kalanki. After 2 hours of ride, we had our breakfast at Naubise and rode again. We went uphill to Thakre from Mahadev Besi. We met Rudra dai at Bhikkhu Sadhana Sthal, where he had been meditating for the past three days. There, Rudra dai decided that our hiking destination will be Kebalpur.

After having tea at Madhev Besi, we started our hiking by crossing a ‘jholunge pul’. During the hike, we rested a number of times and had beer, apples and oranges. We also discussed on many topics such as Hamro Party, Religion, Meditation, etc. I do remember one sentence Rudra dai stated,

“I believe in Meditation which is scientifically proven but not in Sworga as described in every religion”. Finally, we reached our destination Kebalpur after 3 hours of climb. After having tea at a restaurant, we visited a public high school. There, we met the principal with whom Rudra dai discussed about a project that he wanted to implement in near future.

We also had a wonderful time talking with some local elderly people about politics and the reasons behind their choice of particular party. Time passed quickly and it was already time to head back. So, we started our descent to Char Kilo. This part of the hike was the most difficult as it was very steep. Manish fell down multiple times. It took us an hour and a half to reach Char Kilo where Umesh Dai and Raghu came to pick us up. After playing cards at Naubise Hotel, we had late lunch and headed back to Kathmandu.