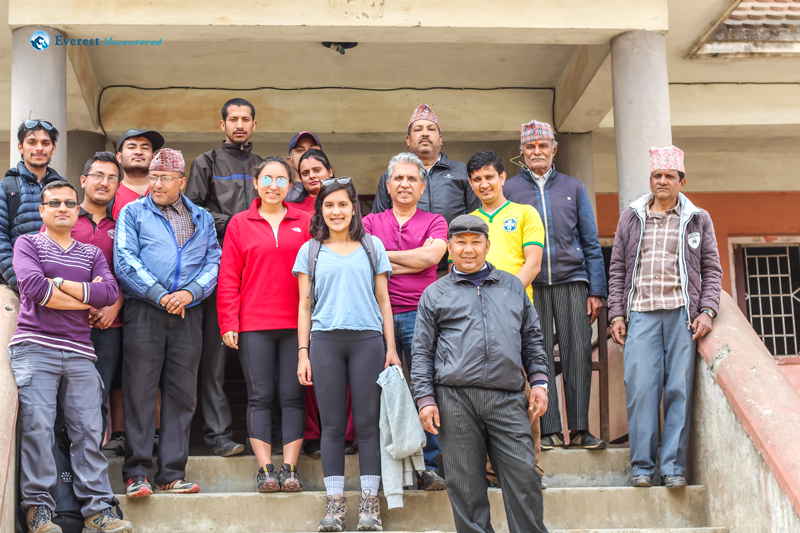 Our trip to Dhading began 7am on the morning of Sunday, March 19, as we left Deerwalk with our group of about twelve and Rabin Dai at the wheel. The purpose of the visit was primarily to gather data and testimonials from villagers about their lives after the 2015 earthquake.

We drove for about an hour before stopping for some tea at a roadside restaurant and arrived in Kanakot, Dhading shortly thereafter. After leaving the van we walked for a short ten minutes before coming upon about a dozen mushroom farming huts, well thatched with straw to retain humidity inside. The farmers invited us to take a look inside and we were able to see the bagging and storing methods for the mushrooms.

Afterwards, we continued to walk amongst the farms to encounter a three different villagers whom we interviewed about their efforts to rebuild their homes after the earthquake damage.

Afterwards, we continued to walk amongst the farms to encounter a three different villagers whom we interviewed about their efforts to rebuild their homes after the earthquake damage. Several of the residents we met were among those previously helped by Deerwalk Foundation.

A twenty minute walk brought us to Dilli Sabitri Secondary School. Dilli Sabitri’s buildings were significantly damaged in the earthquake, but the school does not have adequate funds to repair them. We spoke with the school’s teachers about plans to build a hall outfitted with a flat-screen television and computers. Here, students will be able to stream lessons filmed at Deerwalk Sifal School to supplement their education.

After a brief tour of the school we visited the eighth and ninth grade classes to speak to students about their home lives in relation to the earthquake and how it is affecting their schoolwork. Many students spoke of the difficulties living in a temporary tin cottage, ill-equipped to protect against the cold nights and hot afternoon sun. Still, the Dilli Sabitri’s 250 students are optimistic about the futures of their homes and their school.

We left the school and walked approximately half an hour up through the Kanakot village to the highway, where we met the van. For there we drove to Naubise for lunch, at which point it was 1pm. After a long lunch we began the drive back to Sifal which, due to heavy traffic, took almost three hours. We finally pulled into Deerwalk at about 7 pm, ending the day’s venture!