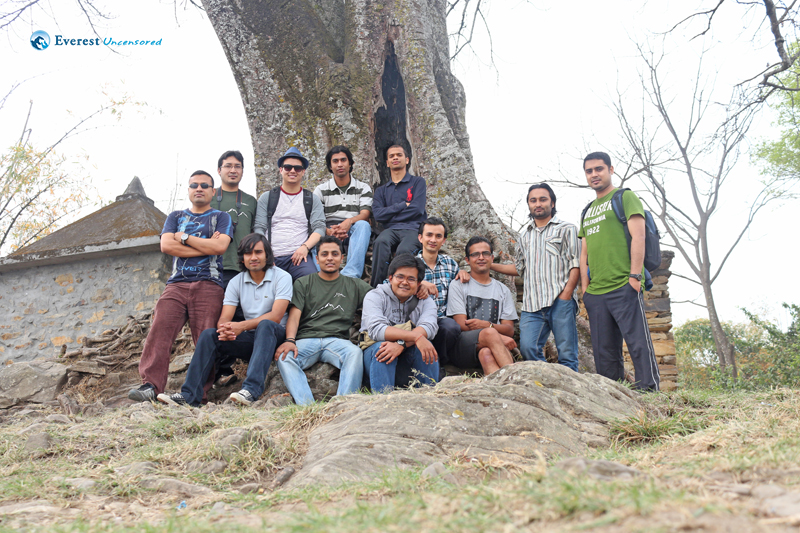 I was always excited about the hike since I joined Deerwalk but waking up early in the weekend’s morning is unimaginable to me. The hike was proposed to be from Taudaha to Champadevi and Pharping. I got the email on Friday saying we would be leaving Deerwalk premises at 8 on Sunday morning for the hike.

This was my first hike so I wanted to be there on time. I reached Deerwalk at 7:30. Then we came to know that our hiking coordinator, Biswas Lohani , was not going to participate due to personal reasons. We left Deerwalk premises at 8:45.

Our Deerwalk van then went to Jamal to pick two other guys and after that we headed towards Kalanki to pick the master mind of the day, Kapil.

Once we reached at Kapil’s home we knew that Kanchan only was joining us. Since both of the hike planners wasn’t joining us, the plan changed. We now went to Kirtipur Bazar as our starting point, which was totally new for me as I had never been there before. We planned to make our hike route, Kirtipurt to Taudaha via Chobhar hill. We then had our breakfast at some random local shop at Panga and boosted up.

After that, we started our hike from Panga and headed towards Karki village. From there on we had hard time reaching Chobhar due to our fitness. We took few pictures on the top of that hill from where our capital city was supposed to be seen but it was all covered by smog. From Dakshinkali highway we walked to Taudaha. It was great relief to reach the destination even though we were very tired. Kapil later on joined us for lunch. We cracked jokes, laughed and had fun over lunch. Then we decided upon a trip to Pharping hydropower. We went there by van as we all were exhausted. We stayed at Pharping for a few hours and had some snacks. The beautiful hills seen from there with and the silent surrounding made the experience all the more heavenly.

Finally, it was time to return and we again walked through the hill to reach our van. Listening to some good music and cracking jokes, we reached Kathmandu at 6 pm. Overall, the hike was exhausting and a memorable one.