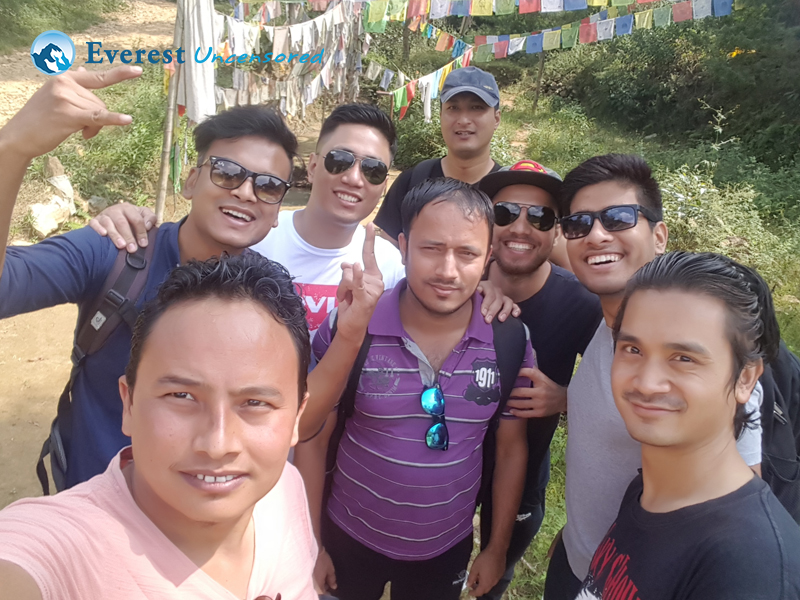 It is always great to be a part of Deerwalk hike. There used to be overwhelming number of participants but this time there were only few interested participants and at the time of hike we were only eight. Our destination was Namo Buddha, famous Buddhist and Hindu pilgrimage site located at about 38 kilometers east of Kathmandu valley. We had planned to start our hike from Panauti, a small historical Newari town, from where our destination was about 10 kilometers. None of us had been through this route before so we were excited to start.

We started our hike at around 10 am. It was a beautiful sunny day. Since all of us were new to this route, we were unaware about the route. Soon we realized that the route is not for hiking because it was all black topped road. This route seems to be good for cycling though. But I must say it was fun, the route was full of beautiful sceneries. We had passed through beautiful villages, paddy fields and orange gardens. Namo Buddha lies at the top of a small hill. Finally, we had to climb uphill through hiking trail which seems to be the only hiking trail in our whole route. It was about 45 minutes uphill before we reached our destination Namo Buddha.

Upon reaching the top of the hill, it felt like the Buddhist flags were welcoming us. We could already feel the serene and spiritual ambience.

There is a mythology behind this famous pilgrimage site. In ancient time, there used to be a great prince who offered his own flesh to the injured hungry tigress and her cubs. The tigress was unable to move for hunting and they were starved for days. Looking at the helpless tigress and her cubs, the prince sacrificed his own life. Later a stupa was built over the place where the bones were buried and since then the place is worshipped as a holy place.

We reached Namo Buddha at around 1 pm. At the top of the hill, there lies a beautiful monastery. The monastery is open to public as well. The monastery is full of beautiful carvings. This place is also home to hundreds of monks. We could see monks praying. There are other temples and monasteries as well. There were the statue of the prince feeding his own flesh to the tigress and her cubs. The place is all surrounded by prayer flags. We could see a very different ritual here. People use to hang photos of their dead beloved ones around the place with their belongings. From the top of the hill, we could see the beautiful valley that we have hiked. The landscape that we could see from the top of hill is breathtaking.

After taking few photos, it was time to return. Our office van had already arrived to pick us. We had some snacks and we headed back to Kathmandu using different route than the previous one. It was a wonderful hike with the wonderful people. It was a kind of farewell hike to our friend Tikaraj Ghising. We had some memorable moments together. Namo Buddha is a good destination for the people who wants to be far from town hustle bustle. It is very peaceful place. All Thanks to Praveen dai for organizing this hike.

6 thoughts on “Hiking From Panauti To Namo Buddha”