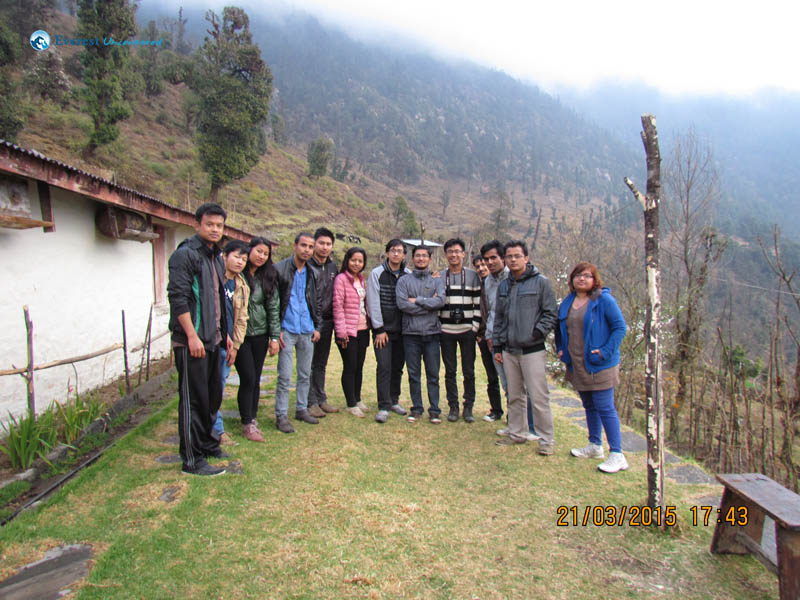 Sunil Lamichane
There was the rumor in the squad that the two day hike is going to be organized by the company. Eventually the day came and I replied, reflecting my interest in the mail. I was in doubt whether I would be selected or not, but I was relieved to see my name on the hikers final list. It was special to me because in the list there was Pramil, a childhood friend of mine. There was a decision to come early in the morning as far as possible showing a long way to be traversed by the hike day.

The pulse of excitation was not limited to an opportunity to move for a hike. The route chosen was new to me, Kathmandu-Jiri-Cheese factory. I heard a lot about Jiri though I had no opportunity to visit this wonderful country site sub alpine town before. Jiri is famous in its peculiarity in ethnicity, culture and wonderful natural view. I thought the hike wouldn’t be a refreshment from regular work alone-there would be a lot to discover by eye and brain as well. It was a chance to study the diversity of Nepal in deep.

As planned the day before, me and Pramil went to the office to meet the rest of the team-we were already late by the time, everyone was waiting for us. We departed from the office at 6:30 AM and few participants were to be picked up from the way. Umesh was playing with the steering to drive us to the destiny – we moved over paved road via Bhaktapur.

No one of us had breakfast that day, we were planning to have at Dolalghat-but we had it at Andheri. After fueling up we again moved from there. We left Araniko highway and started a journey in narrow concrete-curved way.

The uphill way slowly led us in between of all red rhododendron mountains.

The uphill way slowly led us in between of all red rhododendron mountains. This was my first time I ever saw rhododendron in such beautiful charisma. Everyone was mad with this hilarious beauty of National flower-interestingly different in between of forest greenery and other rhododendron color’s. We were traversing the way along with laugh and gags as well-even a single person couldn’t control his/her laugh while Sabnam sung “Bam mardo bam, chhimekiko bam” pointing towards Binod – a guy can make you laugh without speaking a single word. If there was God to see him, dancing, singing and cracking jokes in the last seat of the van, perhaps he would be amazed of his own creation.

We took our first halt at “Kharidhunga”- awesome hill of magnesium oxide, then watching and taking some photographs of panoramic view. Then we reached Charikot in three hours drive from there though it was a long way, but the natural view and the colleagues’ songs and gigs made me feel like we reached in no time. Our memory was full of beautiful natural scene and great moments along the way, but our hunger was crossing the threshold. So, we took lunch in Charikot. After the lunch we had no time to waste so we took the highway to Jiri.

On the way, we left the Tamakosi to flow in its natural way and we started to move uphill. Increasing density of rhododendron was telling us the Jiri is coming nearby. We took photographs even climbed the rhododendron tree. Far from a few kilometers to capture the glimpse of Jiri via our eye and the camera was so exciting. A semi urban locality in a a neat and clean environment feels like heaven for a while. White colored Ghumba was seen to be waiting its pilgrims far from the country. After a few minutes we reach the Jiri and settled at hotel Everest.

After being fresh we decided to visit the cheese factory in the same day. It was 3:30 PM when we started our trip, but locals were saying that it would take at least 1½ hours to reach the factory-simply approx. Three hours to return to Jiri. Dusk may rip into the dark during our return. Anyway, we decided to move. Despite the view of the locals, the time to reach the destination was not fixed and we moved on hoping that we would reach on time. Moving against the gravity made us feel exhausted but curiosity of destination was encouraging us to move on. Sudden change in weather feared us being wet in that cold breeze moving mountain. After hiking for two hours we were at the cheese factory located at 2623 meters height from sea level. The body got refreshed irrespective of the fatigue, strain while moving up. Everyone was hoping to buy cheese from the factory, but it was off season and the factory was empty and they had just started to manufacture cheese for the new season. We observed the procedure of cheese manufacture and took few photographs before returning.

We reached Jiri after moving 1:30 hour of downhill way. We got refreshed and had our dinner there. Hiking alone could not be complete if we don’t share a beverage with colleagues. Jiri is famous for in its local made alcohol. We asked for “Jhyaikhatte” to enjoy that night. We drunk a little of it and went to the bed.

After welcoming the golden morning we planned to discover Jiri in details. The first destination was the Ghumba. There was a way beneath the Ghumba too, we followed it. Where we reached was the office of some social service. After returning we decided to visit “Jireshwor Mahadeva” temple. After a while of driving and a few meters on foot we reached the temple. Returning from there we had our breakfast at Jiri bus-park and moved towards the Charikot. At Charikot we had a cup of tea at Saroj’s house. He was waiting by the road to our new destination and then we moved towards “Dholakha Bhimshen” temple. After returning we had lunch at Charikot. After that we returned towards the Kathmandu valley and at Dholalghat we had a plate of fish. While returning from there Binod, Ritesh, Ramesh and Sujal were asked to play tragic songs and act over it-perhaps all of them had recent breakups in love. Then we returned to our destiny, leaving all memories behind. It was a well-organized trip, which gives a lot of a good memory with eternal remembrance. At last, I would like to thank Deerwalk and my colleagues for giving me such a wonderful time.

Shradha Shrestha
Our destination was Jiri, where I had never been to. I always wanted to visit such type of places as Jiri has already earned a name for itself “The Switzerland of Nepal”. Though I was unable to go with my teammates, I was lucky enough to get a chance to go with the Squad D Team. And in the same time I got a chance to know the other team members as well. Our journey began from Deerwalk Complex. It was a Saturday morning as we arrived at Deerwalk Complex at 6:00 AM. We enjoyed the trip by playing antakshree as always and also cracking jokes. I found all the members of the hike much friendly and comfortable. I didn’t feel that I was going on a trip with another team. After travelling almost two hours, we had breakfast at khanwa. It was a very long distance from Kathmandu to Jiri, i.e.184 km and it takes almost 6 to 8 hours by bus. As we saw some glimpse of a snow-capped mountain on the way, we took some pictures by stopping the van. That was a very beautiful view.

About 133 kilometers from Kathmandu, Charikot provides a spectacular mountain view of Gaurishankar.

About 133 kilometers from Kathmandu, Charikot provides a spectacular mountain view of Gaurishankar. We had lunch there as we all were so much hungry. The highway to Jiri is famous for the environment friendly approach adopted during its design, construction and maintenance. After a long travel, we finally reached Jiri at 3:30 PM. Jirels, one of the unique ethnic groups of Nepal reside here.

Jiri, in fact, is one of the major starting points for the mountain trek to the Mount Everest region. We took a rest as New Everest Lodge but also we wanted to make sure we had plenty of time to get to the Chordung Cheese Factory before it got dark. The Chordung Cheese Factory is located at an altitude of 2633 meters. After a long hike, we reached our destination at around 5:30. But unfortunately, it cannot get cheese there because of the off season. The workers of the factory welcomed us. We could have got a chance to see the workings inside the factory. After seeing the beautiful view from there we returned back to the hotel. The next morning, we woke up early and visited some famous places of Jiri such as the Gumba, Jireshor Mandir and we bought some local cheese of yak available there and had a breakfast. Then we decided to return back to Kathmandu although there’s a lot of distance to travel. There, Dolkha Township is a famous roofless temple of Dolkha Bhimsen. Time was of the essence as it always is, we hurried back as we had to reach Kathmandu by the end of the day. Jiri is the place like no other; its abundant beauty will win your heart. It was one of the unforgettable moments of my life from deerwalk.

0 thoughts on “Hiking from Jiri to Chordung Cheese Factory”