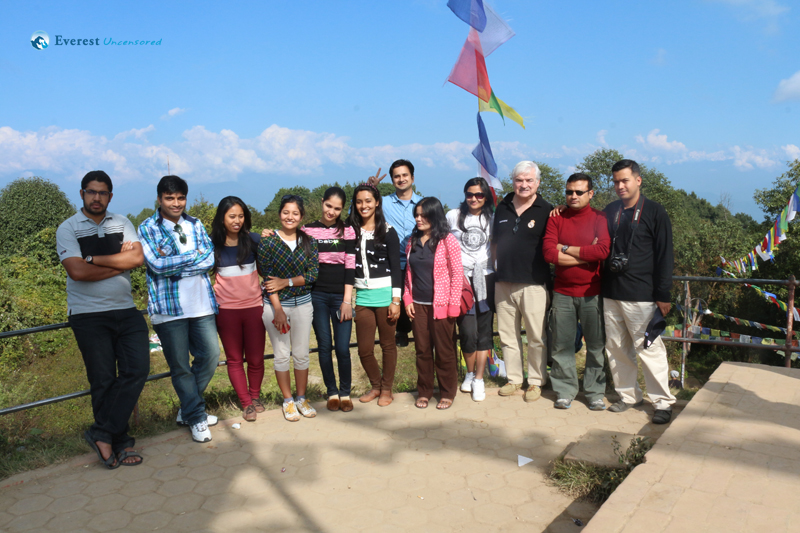 A hardy group of Deerwalkers, most of whom were nursing hangovers from the Annual Festival that was organized a day before, assembled to assault “DURLILL”. According to knowledgeable hikers it was more of a stroll than an assault.

The hardy band started from Telkot and gradually wound its way to the Tower.The weather was spectacular and in shades were a welcome addition to both style and comfort.

Mid way the groups came upon a working farm and were greeted by goat herder who brought new meaning to the term old goat. At the farm Manish spotted a giant lemon tree. For a small fee the farmer skinned this gigantic fruit and prepared a salad with badly needed sweetening which was inhaled by the group.

From there the assault began in earnest. Upon reaching Gasser Gulch we were advised by our guide to take our coach to the Tower so we would not miss Happy Hour at around 2 pm.

The tower did not disappoint us. We caught views of the Himalayas between the clouds. We were treated to an altercation of two gentlemen who were enjoying too much Everest, the brew not the view.

With it getting late our fearless leader suggested, we feast on typical Nepali cuisine (rice, dal and tarkari.). With a fine meal and a few cool ones we headed back to Kathmandu.

On the return trip we enjoyed being serenaded by our guide and his back up girls group “The Sherpanis”.

Feeling very tired and lazy from early in the morning due to fest hangover, I decided not to go to the Deerwalk premises but rather wait for the van at Baneshwor Chowk. After a short wait, Sangita and I were picked up at around 9.45 a.m .

After one hour drive, we reached Telkot from where we started our hike. Climbing more than 500 steps, we reached Mahadev Temple. There we took a short break and posed for some profile pictures. Further we went up and down the hills capturing the beautiful scenery under the serene sky. On the way we again took some snaps playing swing and posing with lambs. We then halted our hike to have some juicy and mouthwatering pomelos at a farmer’s house. John tried some of those and liked the taste. We continued our hike after having some chit chat.

After a short walk, we reached the premises of Nagarkot tower. As it was Saturday, the tower was overcrowded. Some were there for picnic, some were enjoying the view taking photographs from the top; while others were busy climbing up and down the tower. We sat there for some time. Cool breeze was blowing, it was wonderful. We could see the Himalayas behind the clouds. The sky was not so clear though. We returned back from there and entered a restaurant to have our lunch. After having lunch, we headed back home. On the way, we played antakshari. Though I did not participate actively, it was fun listening to others singing. Overall it was a memorable hike and I will cherish the memories made for some time to come.

0 thoughts on “Hiking from Telkot to Nagarkot”