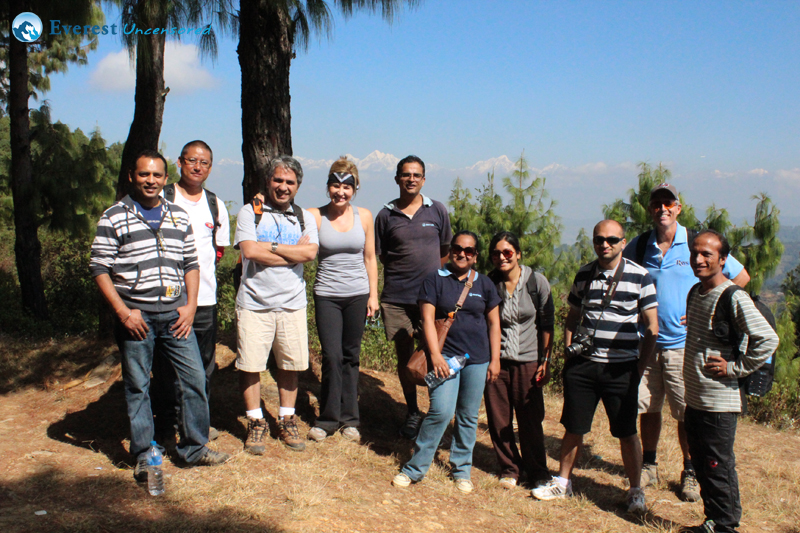 Here is how I would describe the first 90 minutes of our hike. It was like climbing to the top of the Empire State Building in New York City with a couple of exceptions. First, it was like climbing to the top of three Empire State Buildings. Then the steps were not nice, wide and even. It was about a 6-8 inch path filled with slippery rocks that was wet at times. Given that this was my fourth hike, I can say that the physical makeup of the path was typical for Nepal. The length and duration of the uphill part at the start was the most challenging portion of any hike I have taken yet. I think it was because the incline started immediately before there was really a chance to get warmed up a bit. It was like a never ending “shortcut”. It was great to finally get to the top where we rested in this very pleasant pasture. After the rest, we walked down to the end of the road where there was a terrific photo spot with the Himalayas in the background. I got a great photo with Pam here. We then walked downhill and eventually ended up in a little village where we stopped for some great tasting black tea while some of the guys played sort of a version of poker that I was not familiar with.

The last leg of the hike was also very challenging for me with steep inclines and declines on the same type of paths through the hills. This was the first hike where I had to cross a couple of streams. I did get a touch of poison ivy crossing the second one. Because of the steep inclines, there were many amazing views along the way. About 5 hours into the hike, Sushant told me that one of the villagers had indicated our destination was still nearly 15 miles up the road. That seemed impossible at that point. Fortunately, we ended up stopping in a small village for well deserved rounds of beer and different types of typical Nepali food. That lead to many rounds of another card game I was not familiar with called Marriage. Pam did well teaming with Abanish. I ended up playing with Rudra and finally we won a hand at the end! I am guessing everyone decided to let the old guys win one before we left for home. All in all, another memorable Sunday afternoon visiting the countryside of Nepal while spending time with colleagues at Deerwalk.

The Deerwalk hike was filled with greatness; great exercise, even greater scenic views, and the greatest part of all was the wonderful people on the journey. Thank you to all the fellow Deerwalk trekkers and the lovely local people on my path!!!

Neelam Shrestha
The morning of November 4, 2012 was sunny and warm with intermittent breeze of cool air making the start of the day more exciting. I don’t know whether it was just my imagination or really the surrounding; because on that day I was excited, a bit nervous and having butterflies on my stomach for it was my first hike after having joined Deerwalk. In addition to that it was a hike with all Directors including Rudra Dai, Jeff and his better half, Pam. I had never met Jeff and Pam before, so lots of questions were arising on my mind and making me more nervous.

I had never thought of myself as a hiker so I was doubtful if I could do it or not. Along with lots of uncertainties and thoughts, I reached Deerwalk premises at 7:30 am. While entering the gate, I saw Lava Dai who welcomed me with his special loud laugh while clapping his hands. Then after other members entered the Deerwalk premises, we began our journey at 7:45 am, deciding to pick the rest of the hikers from Hotel Annapurna. After picking them, we continued our journey to Godavari. A team of 11 hikers including Rudra Dai decided to make the hike from Godavari to Lakuri Bhanjyang to Panauti instead of Palung to Daman. After leaving Hotel Annapurna premises, laughter, jokes, conversation began among us. The atmosphere inside the van was so pleasant that nervousness disappeared. I had conversation with Jeff and Pam as I taught Pam a few Nepali words, and she tried her best to pronounce them correctly. Rudra Dai was sharing his experience regarding his visit to China and some other interesting events. Jeff added other interesting stories along with Rudra Dai.

With lots of laughter and interesting conversations, we reached Godavari. We had a light breakfast before we began our hike. Our final destination was Panauti all the way through Lakuri Bhanjyang. Pramod Dai and Sushant Dai were busy capturing all the beautiful scenes with their DSLR’s. Pam and Jeff were excited to see the natural landscapes along with Lava Dai who was cracking jokes and sharing his experiences about other hikes.

In the beginning, the hike was a bit tough for me and Monika Didi as it was our first. Rudra Dai kept pushing us to believe that we could do it. Capturing pictures and sharing our views on certain topics, we reached Lakuri Bhanjyang where we stopped for snacks and participated in a team building game – Marriage. After an hour or so, we left Lakuri Bhanjyang with a wish to re-visit the place sometime again in the near future. Then we headed towards Panauti.

Being born and raised in Nepal for the last two decades, I got a chance to see the real Nepal for the first time that day. White snow topped Himalayas and green hills with yellow terraces of mustard plants beneath them made us feel like we were in paradise.

The road to Panauti was wide, easy and boring so Rudra Dai decided to make it a little interesting. He took another path to Panauti instead of the easy road so that we could experience the real hiking. We followed him, and god knows how difficult that path was. Sometimes we couldn’t find the way where to go and had to make the way ourselves. We all were having some difficulties but helping each other, encouraging each other. Finally, we reached Lamatar. There, we met the local inhabitants, the Tamangs, who welcomed us with smiles. There was a school established in cooperation of Nepal-Japan Governments. The students were very interactive with us. We further continued our journey till we reached the roadway. We were exhausted and finally decided that this would be the end of our hike.

We stayed at a small cottage-like restaurant where we had local village peanuts, dinner, and beer. We were ready to leave the place by 6:00 pm but in our hearts we were still unwilling to depart the amazing place. By collecting all the good memories of the day, we reluctantly made our way back home.

3 thoughts on “Hiking from Godavari to Lamatar via Lakuri Bhanjyang”