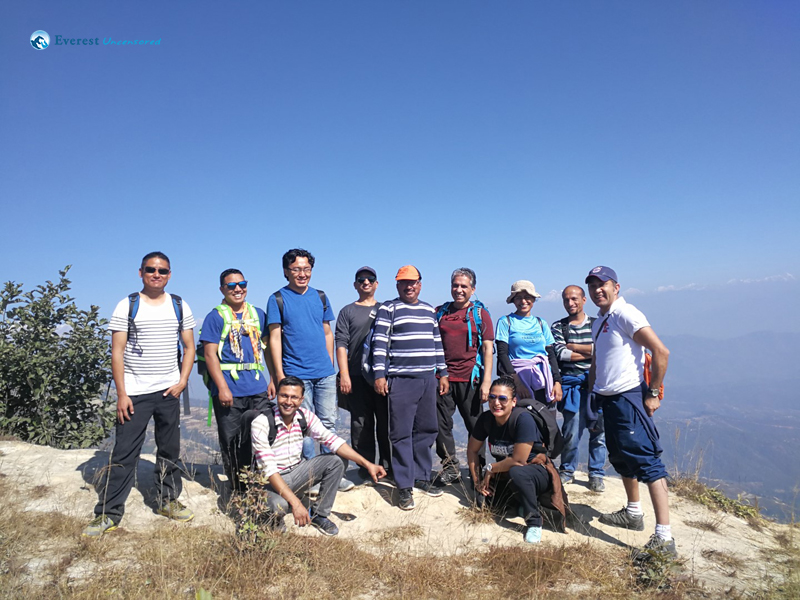 Samiksha Hada After a daylong event of ‘Teachers Together’ on previous day, Bijaya Dai broke the news that we had to hike the next day. At first, I was rather skeptical and kept wondering whether I could make it or not—I was tired and not feeling well. Without giving it much thought, I decided to go for a hike even though I knew that it was going to be tough one for me.

On November 25, twelve of us from Deerwalk family gathered together in Deerwalk Complex at 8 am to begin a memorable hiking experience. This time we were accompanied by Rudra Dai. Our vehicle left the complex sharp at 8 am, and the journey began. After an hourlong of ride, we stopped at Banepa for breakfast. We had tea, selroti and tarkari in the local eatery, and after spending for about 30 minutes, we reached a point from where our actual hike commenced.

This time our hiking route was from Dhulikhel to Nagarkot. We started our hike at 10:30 am. It was a bit late to start for this route, but we had no choice. Our hike was led by Rudra Dai. In the beginning, confused as we were, we could not figure out the route. We were wandering here and there, up and down the hills. Few of us were already tired before our actual hike began. We agreed not to roam aimlessly until we find the actual route. This happened for an hour, and finally we could figure out the actual route through the help of the villagers and workers on the way.

The weather was clear with intermittent clouds floating across the sky. We got a mesmerizing view of the Himalaya range. The cold breeze and the beautiful view of the Himalaya made me to forget all the pains and sufferings and brought happiness in me. We rested for a while and ate oranges and took some photographs. Lost in the soothing nature, we all enjoyed being there. After that we again began to walk. This time we had to climb the step ladder. This was even more painful. It was like a punishment given by us.

After climbing for an hour, we rested at a point. We had cashew, pistachio, and water brought by Pramod Dai there and waited for other members. Pricked by some wild nettles, my hand started tingling with blisters. However, slouching on the soft, green grass, as we let our wearied bodies get some rest, by and by I began to forget the prickling pain. In the meantime, some of the Australians arrived, and we conversed with them about their recent adventures. Suresh Dai (Rudra Dai’s classmate) had a very difficult time as he was not used to hiking uphill and downhills. Eventually, we could make it, and we reached the point where Deerwalk van was waiting for us. It was already 5:30 by then. After a few minutes ride we reached to Nagarkot view point.

We went to the local restaurant for dinner. As the food was not prepared, we had to wait for another one and half hour for the food. By that time, we had some light snacks and made us busy talking each other. Finally, we had food and left Nagarkot at 8:00 pm. We happened to reach Deerwalk complex at 9:30 pm. It was already late and Deerwalk van dropped each of us.

This was most memorable hike we ever had at Deerwalk.

7 thoughts on “Hiking from Dhulikhel to Nagarkot”