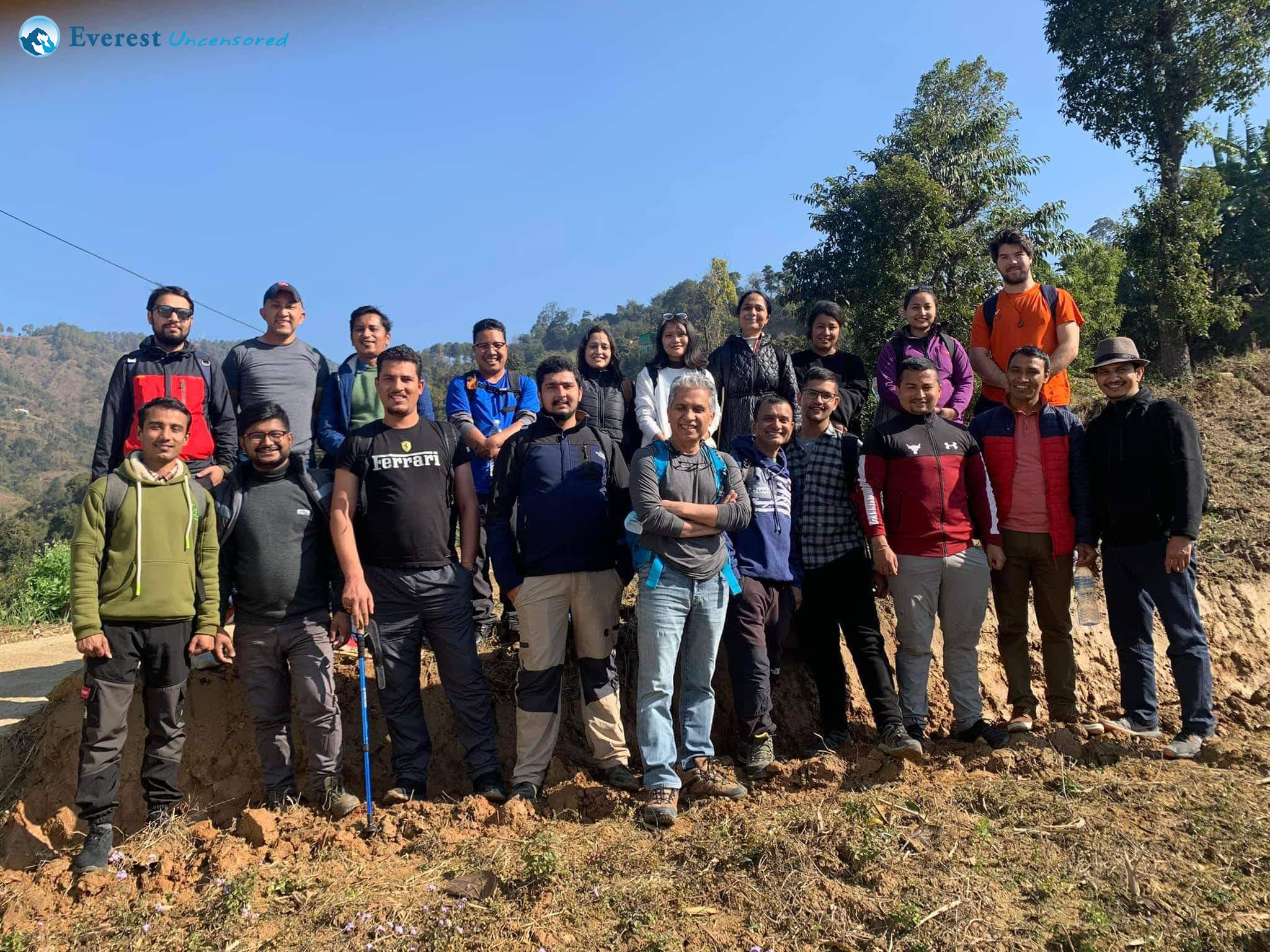 As new corona variants appear to be surfacing consistently, many individuals are worried about traveling. Health concerns, in addition to consistently changing limitations in our nation, have made it hard to plan. However, people are getting immunized by the vaccine around the nation, there is a hope that everyone will actually want to travel freely. With the same hope and excitement team Deerhold, Hamropatro and Deerwalk Sifal school collaborated together to organize a short hike from Dharke to TileGhar via KotKalika. In this hike, we were accompanied by Nathaniel Menninger (Nate) who is famous for the documentary called “The Porter” that he produced and was part of. He is the first foreign porter in the Everest region.

Sundays, which for the most part suggests apathetic mornings. Every single other Sunday was pretty much the same; getting up really late and doing nothing valuable. This Sunday, We gathered around Deerwalk Complex at 7 am and headed towards Naubise. We made a pitstop to buy some groceries and snacks to aid us through our journey. At Naubise we were served a heavy breakfast of Puri, Tarkari, Samosa, and jerry as our fuel for the day. After that, we traveled 5 KM away from Naubise to Dharke and started our hike around 10 am.

We kept on walking through the stairs until we found a concrete road. It was not actually an official hiking spot as there were no such trails, we mostly walked through roads where most of the vehicles were moving. We then followed the path which led us to Gorakhnath Mandir, a Hindu temple in Jiwanpur. We rested for a few minutes and headed to our next anticipated destination Jiwanpur Bajar. On asking the locals about our destination, they said it would take around 2 hours by motorbike. They were all amazed to see us walking and wonder “Why do you bother walking when you can drive all along”. We walked through narrow paths, climbed the steep hills more rather than walking the trails by cutting the distance and taking a shortcut.

Strolling close to lovely scenes and slopes just made me realize how disengaged we have become from nature. This was satisfying to eyes and fulfillment to the spirit. After walking through a trail of narrow paths, We started to climb a lofty slope which made us tired quickly. If the slope was somewhat higher, it would have been rock climbing rather than slope climbing. We proceeded with our journey towards Jiwanpur, Bajar.

We kept on elevating, through the sloppy hill. Since a few of us were capable of hiking such hard trails and could walk quicker we had to wait for some groups. Finally, we reached the top of the hill surrounded by pine trees. We chose to sit and have a dry cookout. Sitting in gatherings, we started crunching on our tidbits. We breathed a few hours after walking and enjoyed the magnificent view of KotKalika Tower(which was still pretty far though). There we had an introductory session, with all the hikers introducing themselves. We talked for some time and then decided to walk again towards KotKalika mandir. It was a pleasant and quiet walk just with the sweet peeping of the birds all through the climb, we continued to stroll towards our anticipated destination. Since we had climbed to the highest elevation now it was time to switch the hills, so we started to descend slowly until we reached Jiwanpur, Bajar. After we reached Jiwanpur, Bajar we started to follow a pitched road as the area seemed to be pretty developing. We walked through the roads where we could see the mini trucks, motorbikes roaming around. We were pretty excited to reach KotKalika temple. However, the time was ticking. We needed to walk quicker, We were all strolling the uphills and getting to the highest point of the hill. Eventually, we reached the temple KotKalika. KotKalika is the peak, king Prithvi Narayan Shah used to observe situations in the Kathmandu valley western passes prior to the great unification drive. We began crunching on our goodies again, during which time I was wondering if we could trade hot air for a cool breeze. Our tidbits gradually dropped their weight, yet our body was at that point extremely exhausted. We still had to descend which was a pretty tough part of this entire hike. While walking down the hills it was like walking in the thin lines. We kept walking down the hill and anticipated the next target, which was Shree Mahadevsthan Secondary School. We roamed around the school, took photographs, and had tea in the hotel nearby. Since many of us were tired we decided to follow Kumai Khola, in Dune Besi so that we could reach Jugedi where we could call our vehicle up.

Then the trail was easy, just walking down the roads for like 20 minutes and finally reaching the United cement factory. We walked 19 km on a single day. It was almost 26 thousand steps, I must have burnt a ton of calories. Finally, our vehicle arrived, we were already hungry for food and energy. Then we reached Naubise and had a wonderful dinner. After the pleasant dinner, we went back to Deerwalk Complex at about 8:30 pm. The hike was a truly fun encounter for all of us and we truly want to believe that we will get to go on hikes like these over and over.