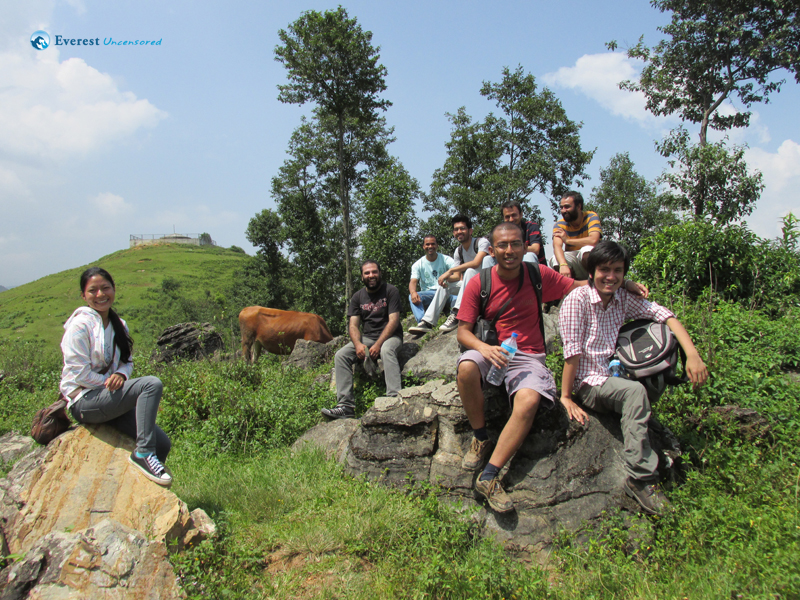 The sound of crunching beneath the footsteps, the majestic view of the surroundings, the smell in the air and the overall feeling of being out in the jungle is what I love most about hiking. Each hike is a unique experience and this hike was no different as I was going on a hike for the first time. I was really excited.

One fine Sunday morning, we gathered at the office premises for hike. The weather was perfect to get out. Our hiking route was chosen from Chalnakhel to Bhatkyapati via Bosan Bhanjyang. Our hiking co-coordinator Prasanna confirmed route to Chalnakhel with Deepak, the driver, and we were ready to move. At around 8:00 am, we left our office premises and headed towards our destination. On the way, Mukesh, Sawan and Manish joined us. Sawan was busy shooting videos while others were involved in relishing the company of each other. As the vehicle passed by Chovar and Taudaha, some hikers began to show their desires on stopping for a view of these beautiful places. But the vehicle kept moving and finally stopped at our destination, Chalnakhel.

Around 8:50 am we reached Chalnakhel which lies to the south-west outskirts of the valley and had our breakfast. Our coordinator was well aware of what lies ahead of us. So, our team was equipped with packet of salt and bottle of dettol to defend ourselves from the dreaded leeches and we were ready to move on. After walking for few minutes, we stopped by to confirm our route with local residents. They gave us two different routes to choose from. We chose the short one as we had to catch this game of Nepal and Afganistan in the evening. As we walked for another few minutes, we began to notice that we were on the wrong path. There was no trace of road ahead, so some hikers returned back and confirmed the actual route. After confirmation, we found our way back to the actual route. It was about 10 minutes of walk before the guys in lead alarmed us about leeches. That’s when the packet of salt and bottle of dettol came handy.

We reached Bosan Bhanjyang around 11:30 am. All the hikers gathered there at one of tea shop, rested for a moment and began to plan for the route ahead. Our plan was to cover every beautiful place nearby in this hike. Thanks to Pawan and Mukesh who prepared special lemon glucose water in bottle. We then continued our hike. On the way to our destination, we found some children playing Langur Burja (a betting game). We also decided to try our luck. Pawan placed couple of bet and was lucky to win one of them. Few minutes later, we arrived at the house of Kaaila Tamang a local resident, who offered us pears for free. After a little chitchat with him, we continued our journey. Vivek was busy capturing insects and flowers on camera all the time. Our next stop was the popular White House. As the name indicates, the house was painted white and was a single house on the cliff of the small hill. The view of the Kathmandu Valley from the White House was magnificent. It was then that Sawan came up with the idea of introducing the hikers. The idea was interesting but it was quite funny to run down the hill and give your introduction in front of camera. After some photo and video shoot, we headed towards our destination. We arrived at Bhatkyapati around 2:00 pm. For lunch, we decided to move to Lahana, Newari Restaurant where we reached after 45 mintues of walk. We had Samaybaji, Chatamari and different Newari dishes ahead of us and every taste was new for me at the place.

After lunch, we moved towards Bagh Bhairab temple. The Deerwalk van was waiting for us, and it drove us back. It was a short and sweet hike for me. This hiking gave me the opportunity to be know the members of the Deerwalk family present in the hike more closely.

My first hike from Deerwalk on 8th September 2013 will be a memorable day for me. The hike was from Chalnakhel to Champadevi and one of the good things about it was – none of the participats knew the exact route. I joined the team at Nakhu Dobato roughly around 9 am; and then, the fun began. We started losing track of the route and we had a tough time finding the way to Chalnakhel from Nakhu Dobato. We had aloo, chana and tea as our breakfast at Chalnakhel, and then started our hike at 10 am sharp. Fresh air is what I like most about hiking. We walked and walked enjoying every bit of nature. I had some trouble walking which slowed down the pace of the whole team. We started encountering leeches from the very beginning, and we applied salt to keep them away. (I found two of them feeding on me at one of the points.) Taking short breaks and chit-chatting, we reached Bosan Bhanjyang at around 1 pm. We climbed up a hill to reach a house named ‘White-House’, clicked some good photos, rested a bit, had fun for sometime before descending towards Champadevi. Google maps on my mobile worked as a GPS and helped us find the correct path at times. We reached Champadevi at around 3 pm, and then continued to walk to Lahana (popular Newari Restaurant in Kirtipur). We had walked almost 12 KM in 5 Hrs. Yes, every one of us was tired. The good food and the drink at Lahana took some of our tiredness away. Making fun of each other and chit chatting made our day. We then walked up to Bagh Bhairab Temple before heading back to the Deerwalk van. We went to Jhamsikhel then after to watch the semi-final match between Nepal and Afghanistan. If Nepal would have won that day, it would have a perfect icing on the cake. With all good environment and people around the way, the hike was awesome. I look forward to participating in more hikes in the coming days.

4 thoughts on “Hiking from Chalnakhel to Kirtipur via Bosan Bhanjyang”