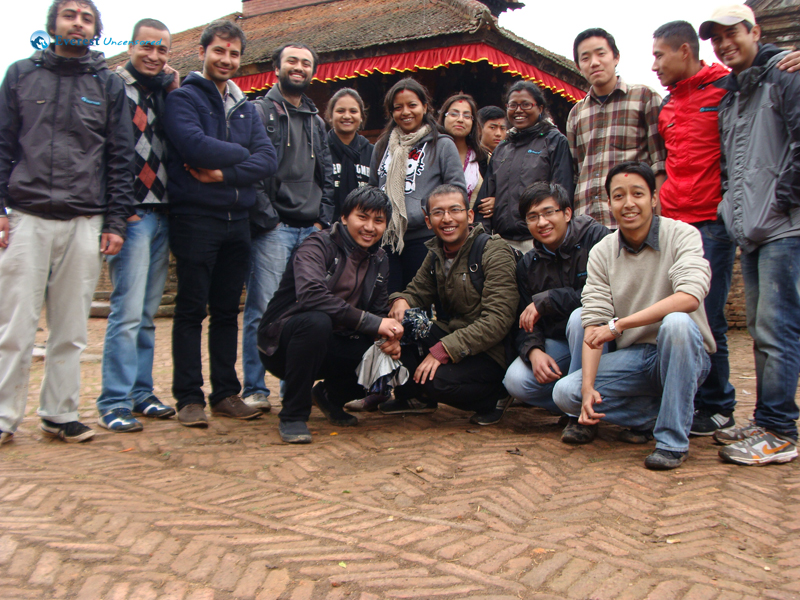 The much awaited hike from Nuwakot Bazar to Nuwakot Durbar was scheduled on Sunday 16th of Feb. The rendezvous point was at Deerwalk, as usual our humble ride for the day was all set, sleek and shiny.

Our fellow hikers showed up excited and happy to finally have a day free from the gruesome mouse clicks and the constant stare to their hypnotic monitors. After sketching out some rough plans, we decided to shop for snacks and refreshments at the nearby Bhatbhateni. Once we were fully loaded with carbs and the precious energy packs, it was straight towards the express way to Nuwakot enroute Kakani.

The weather forecast for Nuwakot was thunderstorm with rain shower. I had a dicey feeling, would the rain hinder our plans; but as it turned out, the day was a perfect blend of drizzling rain and foggy outbreaks. Much to my surprise, the weather improved with clear skies as the day progressed.

The drive till Kakani was a bit rough and bumpy. The sharp turns greeted us with the scenic beauty, each unraveling the mystical green hill tops. The occasional stopovers on the way gave us the opportunity to breathe-in fresh, unpolluted air free from the city’s stress, while exploring the local vegetation.

We stopped at 35 Kilo around at noon for brunch. The local parathas and chaana ko tarkari was a perfect mix along with a soothing cup of tea.

By this time we had covered almost half the distance, next inline were a series of downhill ride. The road was well maintained and the ride was relaxed. The banks of Trisuli River guided us towards Bidur. The well sculpted landscape with iron rich soil was hard to miss. Nuwakot Bazzar was the next stop as shown by the roadside sign, which gave way to a laid back bustling settlement with small businesses, numerous eateries and lodges especially for the local tourists who frequent all round the year.

Our destination was a short hike uphill towards Nuwakot Durbar. The Durbar was strategically located on top of a hill with clear views of the ridges and at the far distant was the infamous Kathmandu valley. The moment was a time travel back to 300 years when Prithivi Narayan Shah must’ve passed the exact spot looking over across the valley and adding Kathmandu on his next-to-conquer list with a proud smirk.

We followed the numerous trails throughout the roadside that bypass the tarred roadway spicing up our hike. We stopped at interesting spots to take pictures and relish the panoramic views of the Trisuli River lazily carving its way across the valley.

The constant supply of cheese that we had packed earlier, gave us the much needed energy boost to conquer the last steps towards the Durbar. At the entrance was the Bhairabhi Temple, the medieval stone lions still guarding its gate. I paid a quick tribute to the Bhairab and moved on towards the courtyard where the Durbar laid still, a remarkable feat with 7 stories of Nepal’s engineering marvel.

The Durbar had now been converted into a museum. After buying tickets we just had 15 minutes as per the rule to explore the place. The Durbar was segregated into various levels, the common room, the servants’ area, the meeting hall, the Kings bedroom where Pritivi Narayan Shah’s bed was preserved and kept intact, the military block and at the seventh floor was the area where the prisoners were kept.

After exploring the Durbar, we all met at a nearby courtyard, couple of paces away and it was time to bid farewell to Nuwakot. We stopped at 35 Kilo, where dinner was served and we headed back to Kathmandu thereafter.

The much awaited hike to Nuwakot Palace took place on Sunday morning. Most of the hikers gathered at the office around 7:30am. I was truly excited as the destination was completely new to me and it was my first hike from Deerwalk.

To begin our journey we first bought some snacks from Bhat-Bhatteni supermarket to fill our tummy along the way. After shopping we headed straight to our destination. We traversed the beautiful scenery of mountains and hills while listening to music. The chilling weather and the warm company of my colleagues added delight to new experience.

After one and half hour, we reached 35 Kilo where we stopped for lunch. Everyone was hungry and the weather was cold; another good reason for a warm cup of tea.

After about 3 hours of journey in the van we reached Battar from where we started our hike. Just as we started walking, it began to rain. Not so perfect weather for a hike, but we were well prepared, for it had been gloomy for days and as we headed for our much awaited destinations, some slips and laughter brightened our day.

We climbed up the hill through the forest and slippery road for an hour to reach the palace. Difficult and tiring as the hike was, what we came to see at the end, relished our hearts reliving us from all the exhaustion. The exquisite palace was located about 48 miles (77 km) from Kathmandu. This pagoda style Nuwakot palace was built by Prithvi Narayan Shah over more than 250 years ago. It is said to be built in about 5 years time. No wonder the beauty still remains as stunning as if it were just created.

The seven storied palace holds a significant importance since ancient times and is the main attraction of Nuwakot district. We went into the palace and observed interiors of each floor. The magnificent sculptures and beautiful embroidery spoke of all the hard work and talent of the ancestors.

There were many temples and religious shrines around the Nuwakot palace. The Bhairavi Temple and Taleju Temple however are the most popular.

After wandering around the palace for a few hours we didn’t realize so much time had passed. No time was long enough to explore all the excellence of the palace, but it was time for us to head back so we got into our van that had been waiting for us.

Recollecting all the enjoyment of the day, we returned back home tired but joyous and content.
My first hike to the Nuwakot Palace was something I shall cherish for a lifetime.

5 thoughts on “Hiking from Bidur to Nuwakot Durbar”