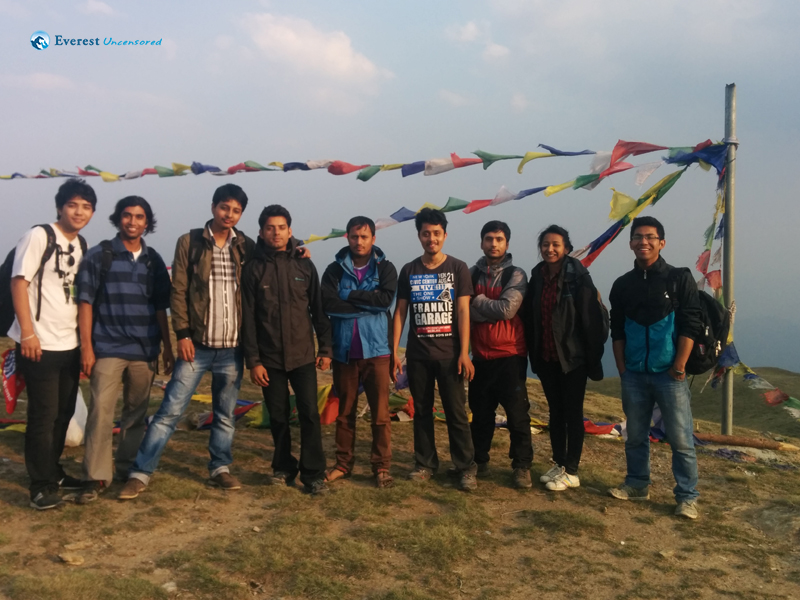 Narayan Chalise
On Saturday morning of 17th May, we left office premises around 6:30AM for our hike to Sailung. We picked our remaining members on Koteshwor. We took our breakfast near Dolalghat. After 4 hours of long office cab ride along Arniko Highway, we reached Mude around 11:00am and had lunch in a local restaurant.

After having a lunch we left our office cab and took a local bus to Dhunge. Local bus was fully packed so we did not get any seat inside and were seated in the roof of the bus. We reached Dhunge, a small settlement, at 2:00pm, with a few roadside eateries around five. We knew that from Dhunge the trail would be steeper and uneven but after a few hours of walking we were energized by the clean and crisp mountain air. Finally we reach the destiny around 5:00pm. The view from the top was magnificent. Well, I can’t explain that moments in words, that moment was just awesome. That paradise view of sailung, which were covered with dew, cool breeze, and those Buddhist flags and hillocks. Just awesome!

Sailung(sai define hundreds and lung defines small hillocks) peak itself is a mystical place and a holy area for both Hindus and Buddhists. Sailung apparently has 108 small hillocks hence was named so. Is deserted whole year, beside one pilgrimage day. It stands at an altitude of 3,146 meters, with open rolling hills and hundreds of small hillocks. The half yak and half cow are cattle there.
With our lungs crossed, we reached Khola Kharka(2948m), a small settlement on the other side where we were privileged to enjoy the hospitality of the Tamang owners, at 6:30pm. And took dinner at 9:00pm and I went to bed.

On sunday morning of 18th May, we went to a small kalinchowk, which is representation of main kalinchowk. We took our breakfast at 8:00am and left the khola kharka at 9:00am. We took a local bus, which was again congested. Instead of sitting inside we were seated on the roof of the bus. It was most adventures journey I ever had. I can’t explain those moments of my journey in words, that journey was more thrilling so I suggest others to go sailung by local bus from mude to khola kharka then you will feel the same excitement as I felt. Finally we reach mude at 12:00pm and had lunch in a local restaurant.

After having lunch we took our office cab and went towards Kathmandu. In Dolalghat we executed our swimming plan in Indrawati river. Then, we returned Kathmandu and reached at 5:00PM.

Parmeshwor Thapa
The dawn was approaching and Buddha* taking long strides placed his one foot on the top of Sailung and the other across Koshi river. Thus his footprint lies up there.

Once in the ancient time a cow, respected as goddess Laxmi according to Hindu mythology, was chased by a tiger constantly for whole night. In the morning a crab saw the cow being chased. The Crab caught the tiger in its leg and helped the cow flee. Thus a symbolic representation of cow, crab and tiger are placed there in the form of stone known as Bagh-Dhungo (Tiger metamorphosed as stone).

With inquisitiveness added and hunger minus-ed, we were listening to the ancient stories during dinner. Regarding the name of place, Kamal Lama the owner of the home we stayed, mentioned some of interesting explanations.
‘Sai’ means hundred and ‘lung’ means hills, Sailung contains the 108 number of hills.
‘Sai’ means hundred and ‘lung’ means ghosts. Sailung is place where hundreds of ghosts roam.
‘Sailung’ is the name of flower that is found on the top hill thus this place is named Sailung.

I was amazed that we have enough myths regarding anything anywhere, this is the feature of ancient Nepal. I am referring ancient because later the day when i asked some of the younger people from places nearby they knew no stories about the place.

The hike started early in the morning. We left Kathmandu around 6:30 on office vehicle with loud music, prolonged chatting, making fun of ones (as the others are party to enjoy), junk foods and enjoying all those moments when friends are together, we reached Mude. After having lunch, there was dusty road and bumping bus to carry us to Dhunge, from there hike started. And with all walking and enjoyment we reached Sailung, Oh What a scenery, those landscapes, for the first time our eyes were feasting on such beauty of nature. Mind was in seventh heaven, at least for a moment. After taking sufficient photographs to satisfy our self pride and ego, we started downhill as evening was approaching.

Teas were sipping as we were resting on the small home/hotel of Moktan didi at khola Kharka. With warmth of Tea we were discussing about the Chauris in the Sailung. and I said that isn’t it true that Chauris should have longer fur on their back and instantly she answered that those with longer fur on the Himalayas are Yak. We all were looking at each other for a moment, as we thought that Yak is corresponding English word for Chauri in Nepali. And later we discovered that those Chauri in sailung were hybrid from Yak and Bull .

We searched for home stay sufficient to accommodate us all 10. It was where we were enjoying old stories of the place, with the sweetness of Chauri’s milk. It was the first day.

?This Driver wont last longer, hey you all take the name of your god’ A man in his late 40’s was talking loudly as we were scared to death on way from Khola kharka to Dhunge. Narrow, steep and winding road with such a narrow curve. Don’t ask about the bus, it was already overloaded both with stuffs and men, and it tilted the way it will fall to great depth in next second. It was that terrifying experience, I felt as if bungy was a child’s play in adventure compared to this. We trembled with fear as we saw steep uphill and narrow trial even narrowed by large spiky stones, and that experience repeated with same intensity again and again. We felt as if this was the end.

I felt our prayer was answered as we were at Mude enjoying the lunch. We were feeling great as next moment we will be on our office vehicle. Relieved and in peace I could remember, that morning we woke up and went to toilet in others home as no toilet was there where we stayed. Took breakfast and some of us went for longer walk to Sister temple of Kalinchowk Bhagwati and some for shorter walk around hillock. The Chauris grazing, peaceful village, warm sunlight, and stress free morning was memorable time. And It was all Umesh Dai’s drive back to kathmandu.

* Since there were hundreds of Buddhas before Gautama -It is unknown which Buddha is referred here.

Nishant Shakya
Ten of the hikers from Deerwalk left the office premises at 6:30AM in the Deerwalk van with our exuberant driver, Umesh Dai to reach the first checkpoint of the two days weekend hike to Mude. Leaving behind SuryaBinayak, Banepa, Dhulikhel, Panchkhal, DolalGhat and Khadi Chaur on our way, we reached Mude and reached Dolakha at around 11:00AM where we had our lunch at a local restaurant. The temperature there was a little colder than that of Kathmandu which I found very pleasant for a hike. From Mude, fortunately we caught up a local bus to reach Dhunge after 2:30 hours. The road from Mude to Dhunge was very uneven, the bus tilted left to right, hopped up and down. We were jolted throughout this ride from hell and finally reached DhungeBazaar, the starting point of our hike.

DhungeBazazar, at the height of 2500m from sea level, had a very pleasant weather, the wind there was quite refreshing, almost perfect for our hike. From Dhunge, we started our hike climbing narrow paths through green fields with very little settlement around the area. We hadn’t brought many drinking water bottles with us so we were hoping to get fresh water around the area but unfortunately, there wasn’t any and neither there were local houses in the way. We had to use it sparingly. Thankfully, we met an old couple living in a small hut who offered us water. The jokes by Sandeep made our hike from Dhunge(2500m) to Sailung(3200m) much more entertaining. Slowly and steadily, via the shaded hills in a cool weather, we reached to the top of Sailung Hill (100 Hillocks) where we could see small hills. Magnificent view of the beautiful landscape with cool silent breeze enhanced our mood. The landscape consisted of small hillocks spread over like plateaus which were covered with soft grass, and we could see Chauri grazing on these green fields. The land consisted of many ritual graves adorned with prayer flags. Unfortunately we couldn’t see the beautiful Himalayas clearly. We were busy taking photographs atop the mountain with exquisite backdrop for a photo portrait. After spending 30-40 minutes at the top, we descend down to the nearest basti as it was getting dark and had to find a place to stay for the night. We finally reached Khola Kharka, a small settlement where we were warmly welcomed by the local Tamang residents. We had a campfire as it was very chilly down there, and enjoyed the silence of the nature and had jokes and fun afterwards.

Next morning, we were hurried as we had to catch the only bus to Mude from Sailung. On a chilly morning we were warmed up by the bus ride to Mude. There Umesh dai was waiting for us in the Deerwalk van. At Mude, we had our lunch and then climbed up the van for the ride back to Kathmandu.

0 thoughts on “Hiking From Dhunge to Sailung”