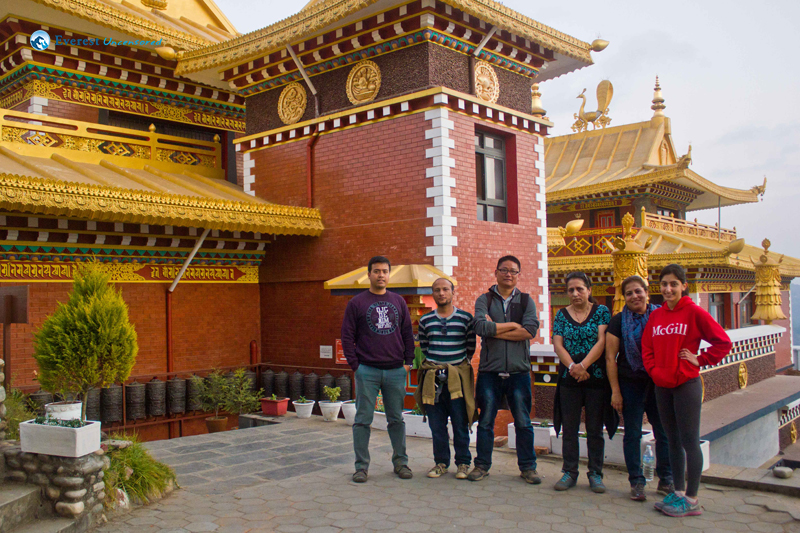 Elvisha Dhamala
It was a warm and sunny afternoon as we drove to Panauti. We were initially unsure of where exactly to start our hike so we stopped at a local store at Dhalmale to ask the shop owner about the best route to get to the Namo Buddha Monastery. He showed us a dirt road right beside his store and told us to follow it up the mountain warning us that parts of it were steep. He told us it would take us about 2 hours to reach the top. We picked up a bottle of water each from the car, peeled off our outer layers of clothing, and set off.

A few minutes into the hike, we reached a somewhat steep incline that was rough and rocky. As we were climbing up, we were met by a middle aged woman whom we asked if we were following the right path. She looked away and smirked before telling us that we were as she walked away. We continued on the path and saw many chickens, goats, and cows on the way in the local houses and barns.

We started to sweat in the hot mid-day sun that was beaming down on us as we pushed our legs to keep climbing. We soon appeared to a windy and narrow path that led us through local terrace farming areas. Parts of it were wet and slippery but at least we weren’t going up hill anymore. We were met by a fork in the road when we came across a woman who was planting along one of the farms. One path led us straight up a steep and rocky incline while the other one was flat and wound around the hill. We asked the woman which would be best and she told us that the incline was the road less travelled and would be quicker but the other was more scenic; we went with the shorter route.

We’d finally made it up the incline when we were met with a very narrow path that had the hill on one side and a steep decline on the other. One patch was particularly unstable and quite narrow. We lined up one by one as we crossed it. The first few of us were successful but it was Manish Man Singh that would fall victim. He slipped right into the little patch and barely held on to the path with his hands.

He immediately handed over his camera that he was carrying as the rest of us stopped to laugh and take pictures of him.

He immediately handed over his camera that he was carrying as the rest of us stopped to laugh and take pictures of him. We eventually hauled him back up onto the road and he told us he’d actually been hanging off a branch and didn’t have his feet set on any surface, at which point we felt a little bad but still continued to laugh with him.

A short while later, we finally made it to the top of the first of three hills we were to climb and reached the town of Batase. We stopped for a quick few minutes to get some refreshments at a local store and chat with the young kids that were playing there before heading onwards. We started to make our way down the hill and the road downhill was quite possibly the worst of the entire trip. It was rocky, unstable, and thus particularly hard to maintain your balance on while going down a steep decline. When we made it to the bottom we saw many young kids in their school uniforms as they were making their way home. A lot of them stopped along the fields to play, some were with their parents, but most importantly, they seemed very happy even as they made their way up and down the hills and so it motivated us to keep going.

We slowly made our way up the second hill as we started to tire out – at least we didn’t have to climb it all the way to the top. By the time we were descending down the second hill, it had begun to get a bit chilly outside but we were still sweating from the hike. When we finally arrived at the third and final hill that would lead us to Namo Buddha, we first had to cross a small bridge. At the foot of the bridge was a black dog, who decided to follow us. The dog followed us up the steep, rocky terrain as we pushed ourselves to keep going.

We finally arrived at the base of the Namo Buddha Monastery, but we were informed by the locals that we still needed to continue a bit further to reach the actual monastery. And so we continued on. We arrived at a set of stairs that twisted and turned and never seemed to end as we begrudgingly walked up, still with the dog at our footsteps. After what seemed like an eternity (but in reality was only about 5 minutes), we made it to the top just as the sun had set. It took us a total of 3 hours to reach the monastery.

We walked around the Namo Buddha Monastery for a short while as we took in the breathtaking sight of the golden carvings along the monastery. The monastery also overlooked the hill we’d climbed as well as the others and as we recognized how high we’d climbed; it gave us a sense of much-needed accomplishment. We soon made our way back into the car that was waiting for us at the top and drove down the hill. It took quite a while with much of the roads being unpaved and narrow.

We stopped at the Dhulikhel Lodge & Resort for dinner on our way home. We were absolutely famished and quickly devoured our food before heading home. All in all, it was a tough and tiring hike but definitely worth it as the Namo Buddha Monastery is beautiful beyond words and the hike itself was a great experience.

106 thoughts on “Hiking from Dhalmale to Namo Buddha”