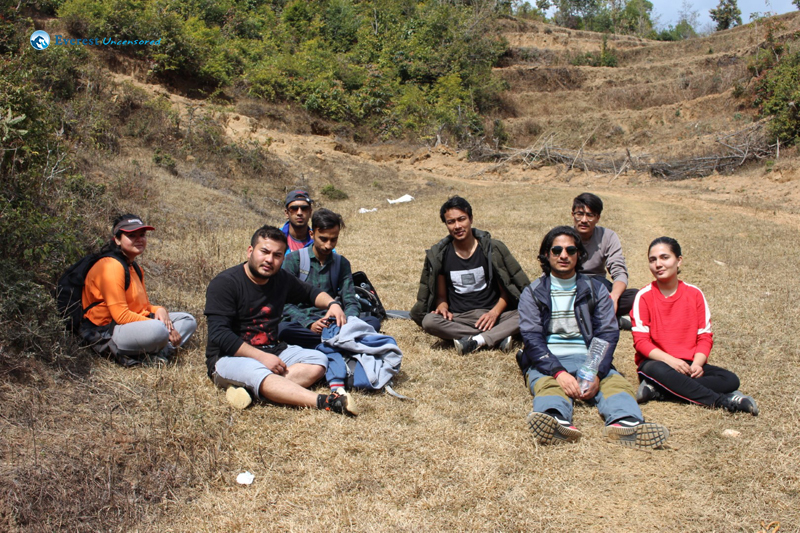 Riwaj Kharel
The day had finally arrived. All of us were very eager and excited as we gathered inside the Deerwalk complex to commence our hike to Okhreni.The plan for the hike was decided a couple of days earlier and the final list of hikers was finalised by the evening a day later. I joined the hike as I believed it was a great opportunity to experience an adventure into the wild.

We started the journey around 9:30 after eating our breakfast at Hotel Nimdiki near the Shivapuri Nagarjun National Park.The first hour of the journey was difficult because of the heavy food we ate earlier, so we stopped at multiple checkpoints to catch our breath. One of the checkpoint was a pilgrim site of Shivalinga under a cave, where we rested and captured the moment with a sequence of photo sessions.

A couple of hikers were already familiar with the route, so we were not worried about losing the way as we could easily get back on track. As we walked through the dense forest, we were approached by two children and their dog. Seeing so many strangers, the nervous dog ran away and got lost, but the children stayed back to chat so we donated some Deerwalk notebook and pencils to promote education. It felt good to give back to the society.

After some more walking, we rested under a shelter where Anuj took out his guitar and played some rockstar melodies for the group like some modern-day Nabin K Bhattarai. After his performance which helped all of us catch our breath, we walked for another two hours and took a light snack break in a big open ground on a side of a hill. After gobbling on Oreos and Wai Wai, we sat and enjoyed the sun along and the beautiful view around us.

Around 1 pm we reached a hotel where we decided to unwind and have our lunch. The hotel was located in a beautiful location surrounded by white orchids and chain of hills. We ordered our lunch which included noodle soup and traditional Newari Chyang. As we were enjoying as lunch and the scenery, it started raining heavily so we decided to stay there for a while. Even though we were stuck there, Anuj and Utsuk made the atmosphere very lively with their musical performance. As the weather was very cold, we had some more of the local foodstuffs that our hosts could provide us.

Finally, the rain decided to slow down so we decided to get moving and around 6:30 pm we reached back to Sundarijal where Deerwalk’s minivan was waiting for us. As all of us were famished, we decided to go to a Thakali kitchen in Boudha. We rewarded ourselves with traditional Thakali thaali and some hot drinks to combat the cold weather.

It was a very memorable experience filled with adventure, laughter and fun. I have become addicted to hiking and would like to go on another one very soon. Thank you.

I am a species with 48 (forty six and 2 )chromosomes connected 24 seven with nature!!
Suman Thapa