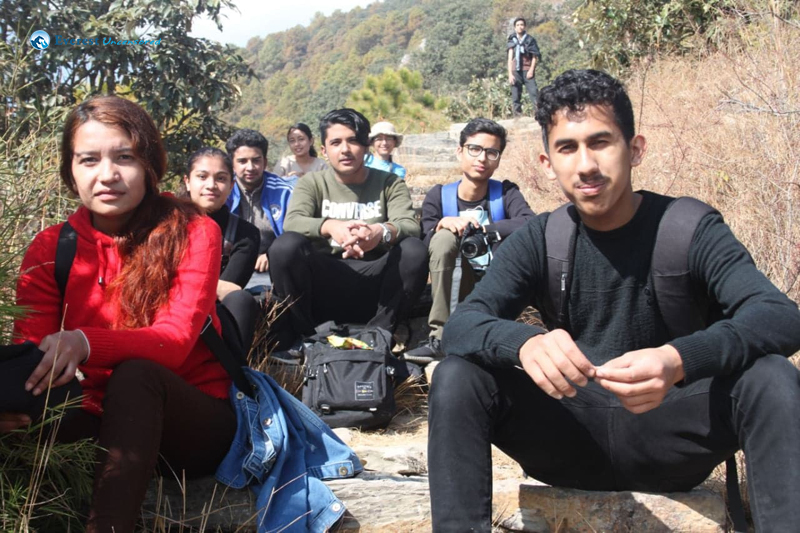 Pramila Khadka On 24th November 2018, DSS Hiking Club organized one day hike to Champadevi for batch 2020 and 2019. The hikers departed from DSS complex at around 7:50 am. After travelling on bus for around one hour, we reached at the initial point of our hike. We started our journey by walking the roadway and waited for other hikers at Champadevi School. We continued our journey through uphill road. We reached at a small temple and rested for a while .We took some pictures and continued our journey. Some of the participants weren’t feeling well so they returned back towards the bus.

The most difficult part of the hike started after reaching the temple. We started walking through the jungle. The way was really steep and full of stairs. Perceiving the woods and chirping of birds made us more joyful and energetic. We continued for a while and got tired. Taking some rest under the shade of trees, eating snacks, we continued our trip. The jungle’s way was quite narrow and slippery. Our clothes were caught by the thrones of plants. As we walked through the jungle, we could sense the smell of leopard. So, we walked inside the deep jungle calling each other’s name and making noise.

After some period of time, we reached at a junction where there were two ways to go: either towards Hattiban or towards Champadevi temple. So, we headed towards Champadevi temple. We had almost completed 1/3rd of our hike. The scenario was very beautiful as we could see that we were surrounded by the hills, mountains and greenery. We took some photos while enjoying our hike. As we went forward, we were really tired as the journey consisted of very long way full of stairs. After sometime, everyone in the group was tired so we rested for a while. While resting we were joined by our friends and started walking again. We met a lot of tourists on our way.

Talking with friends and observing nature, we reached at our destination “Champadevi Temple”. We were shocked to see the temple as we most of us had expected it to be a big temple but it was pretty small! The beautiful temple was located in the middle of the jungle. We took some group photos and returned the same way heading towards Hattiban Resort. The beautiful scenario that we could see from the top made us excited. Talking, resting, taking photos, we reached Hattiban Resort and waited for others to accompany us. Then, we headed towards the bus and returned to the valley. We had a wonderful lunch after a tiring hike. Although it was tiring, we experienced new things and had fun together.

11 thoughts on “Hike to Champadevi Temple”