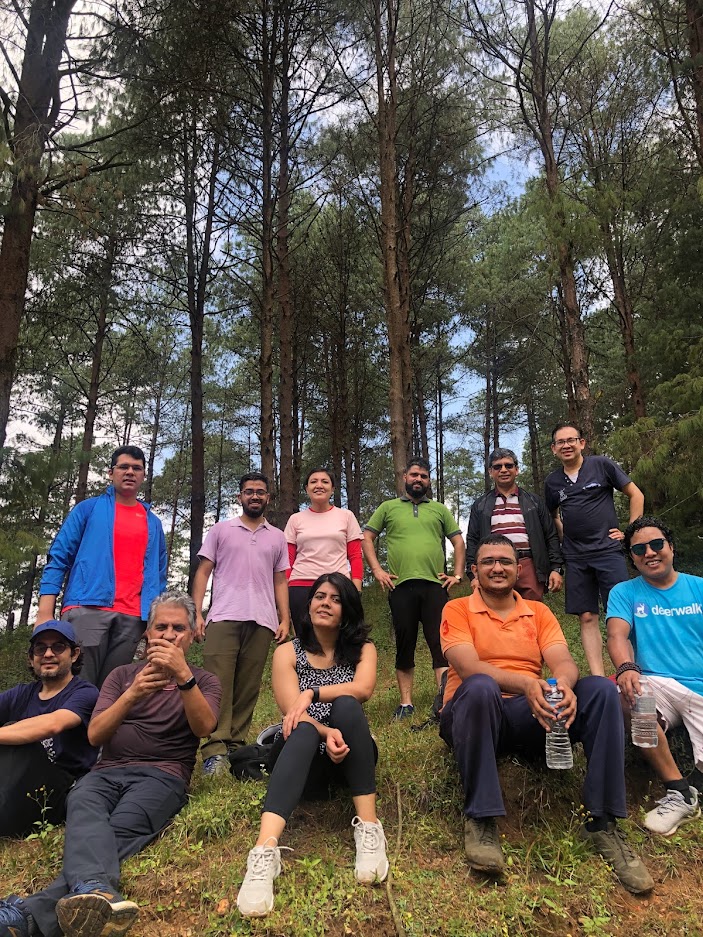 I was fortunate to join a hike with the Deerwalk team, led by Rudra Pandey, on Saturday, October 16. The plan was to begin our hike from Godawari and end in Panauti. We expected the hike to take between 5 to 7 hours to complete. After a cup of tea, a heavy chana and omelette breakfast in Godawari, and some planning, we started walking at approximately 10 am.

I hadn’t done any strenuous physical activity, much less hiked for 5-7 hours, in the past 2 years (Covid and lockdowns are to blame for that), and I was terrified by the enormous task ahead of us. The more experienced hikers among us were very encouraging. Bijaya Shrestha, who is the Principal of Deerwalk’s Sifal School, entertained us along the way with stories of love and its trials and tribulations. I won’t share them here, but suffice it to say that they could fill a whole book!

The first half of the hike led us through a beautiful, albeit slippery, jungle trail. We noticed that even earthworm were slipping in the wet mossed soil. I couldn’t help but envy the earthworm, who had the liberty to roll and slither through the hike without sore muscles and aching feet to deal with. We paused at a few points to snack on bananas, apples, chocolate bars, and cucumbers – these were in the hiking goody bag prepared very kindly for us by Deerwalk’s team. We were blessed that our forecast for rain turned out to be wrong, and so we walked under a gentle sun gently eclipsed by large jungle trees.

The conversations along the way were enriching. We talked about education technology and the possibilities for change in the education sector in Nepal. As a young teacher who sees their future in Nepali education, I felt inspired by the thought and commitment that Deerwalk’s team showed towards education. I learned about the educational program at Deerwalk’s Sifal School, which emphasized reading, writing, and coding skills for students from elementary through higher secondary education.

After almost 4 hours of walking, we were all tired and hungry, some more than others. When we reached the outermost part of Panauti the roads were less friendly. We walked on a pitch road for several kilometers before Rudra Pandey found an opening to a more hike-worthy path through grain fields. After an hour through these paths, which run parallel to the road, I began to feel as though I had reached my limits. The hike was cut short by at least an hour for my sake. I appreciated this flexibility on the part of Deerwalk’s team.

On the way back we stopped at a restaurant in Banepa for snacks, dinner, and drinks. The food tasted better after the hike, and we enjoyed the conversations, the endless jokes, and various linguistic confusions on our drive back to Sifal. I won’t forget this translation mishap: “Juju” in Newari translated to “King” and then liberally applied to the phrase “Former Juju Gyanendra Shah”!