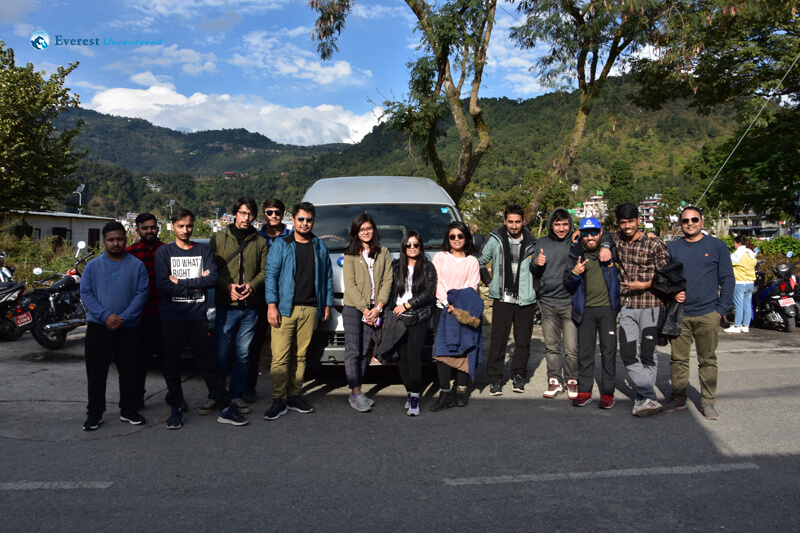 Bandana Bhandari
Multiple thoughts kept leaping through our minds as we eagerly looked forward to the two-day hike to the Australian Base Camp (ABC). Before the two-day hike began, the changing weather was challenging us with heavy rainfall, but the morning started very beautifully. In the morning, the weather was extremely cold. Everyone was shivering as well as excited at the same time. The journey began after we left the Deerwalk complex at about 6:30 am. Everything was perfect. We started our journey with mesmerizing views of natural scenes, along with happy faces, and on top that with some entertaining music.

At about 4 pm, we reached Pokhara, all exhausted. We then decided to take some rest and have lunch at “Maeli Didi ko Bhanasa Ghar.” Taking some rest, we resumed our journey at 5:30 pm. It was completely dark, and all of us walked through the jungle in a group for about two hours. And finally, we reached our hotel. The place was extremely cold. We enjoyed every moment, started a campfire and a barbeque even as the mercury dropped to a zero. And what’s more, we saw some mesmerizing meteor shower. The next morning unfolded as we clambered up a beautiful hill that offered striking views over the valleys and also the stunning panoramic scenes of the Annapurna mountain range. We all were very excited to see the mountains, but sadly we had to leave the place. To restart our hike, we came down to Phedi from the Australian Base Camp. During the four-hour-long hike, the views of the mountains and villages were fantastic. We came down to Phedi, making our route through Dhampus.

We all were tired but also happy to see a beautiful place. We left Pokhara at 12:30 pm after having lunch at Munglin Bajar. While coming back to the Deerwalk complex, we got stuck in huge traffic due to some bus accidents. Eventually, we reached the Deerwalk complex at 9:30 pm with tired but happy faces.

Getting There
The long drive from Kathmandu to Pokhara was tedious, but once we reached Pokhara, we immediately felt happy. Everybody sat down with a big smile at Maili Bhansa Ghar to have some Thakali food. After lunch, we decided to stay at Lakeside for half an hour for refreshments. It was about 4:30 pm when we left Pokhara. After an hour-long-ride, we reached Lumle. The air was crisp, and everybody was excited to start the hike. It was about 5:30 pm when we started our hike. After about one and a half-hour of hiking and a steep slope upward with some stops along the way for rest, we finally reached the Australian Base Camp (ABC). Setting that last step on the ABC was an ecstatic moment. We had already booked rooms at a hotel. Since everybody was tired, we rested in our rooms for about an hour.
Night at the Australian Base Camp
The night at the Base Camp was enchanting. After having dinner, we decided to set a campfire and barbecue some chicken. We were very lucky as the day of our hike was the day of the meteor shower, and the sky was clear from the ABC. The beautiful views of the mountains were simply stunning. The mountains at times make you realize how insignificant you are. The Macchapucchre and the Annapurna shined in the moonlight.

We huddled around the campfire, watching the shooting stars and the mountains, savoring some barbequed chicken for a long time. Ah, how clearly the mountains looked from here.

Nearing End
The next morning, with a heavy heart, we descended down from the Base Camp, after having some breakfast. The return hike to Fedhi was as stunning as it had started at Lumle. We hiked past many beautiful villages like Dhampus. All the while the majestic view of the mountains tagged together with us. The return hike was around 3 and a half hours long. Chandra Dai was waiting for us at Phedi. We were exhausted from the hike and hopped into the Hiace as soon as we reached there. We had lunch at Muglin and returned to the office premises at around 9:00 pm. The hike was one of the most memorable ones of my life.