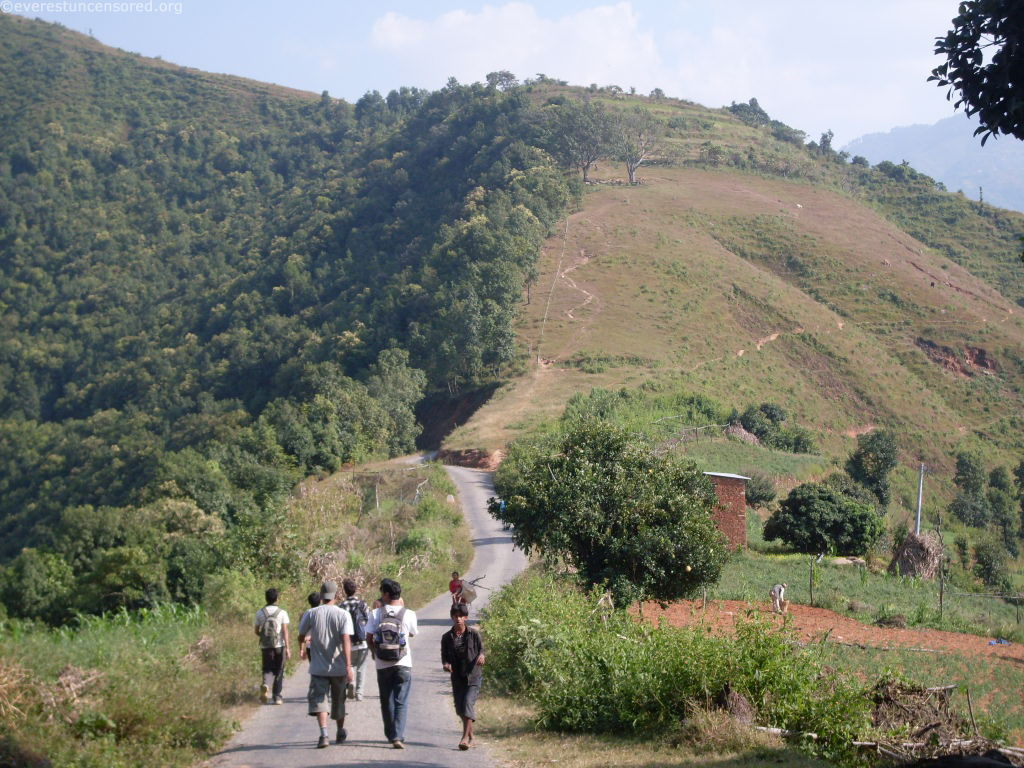 Seven people took a break from the arduous climb that they had started from the highway. Bags were scanned for last of the remaining foods. All the eyes were thirsty to be dazzled by sparkling water. But static reflection of the sunlight from the droplets in the wall of the bottles disappointed everyone.

many villages and hundreds of eyes gazing at the strangers

Five sunny hours had already passed since they stepped out of the D2 van. They’d come past a river, many villages and hundreds of eyes gazing at the strangers. A hill climbed up and down, another turned around its waist, another up again. All of them were terraced with various crops: rice in the foothills, maize, millet, even ginger, chilly and tomato as they climbed further up.

“tyo bar ko rukh ma swing gareko ta laastai mazaa aayo hai?” Mahesh was first to regain the energy to break the silence. Everybody agreed; the sweat running down Lekh’s face took a different route as he flexed his facial muscles differently to smile, he knew, he had the best swing of all.

From the point there, they could see a black topped narrow road winding out of among the hills and riding west along the crest of the hills. It refrained the beautiful view of Nuwakot on the North from the highway down South in Dhading. But they could enjoy the enigmatic view as much as a swallow on a branch of the tree above them; showing that the bird had same level of interest.

mildly inclined grassland, on the back of barren rocky hill

The dazzling galvanized steel roof of Jeevanpur health post along that winding road helped the group trace back the route they had walked. The small village looked tiny down from there. Before two hours, that place was their destination for the day. “We’ve come a long way, it is tough one, isn’t it??” Pawan-the coordinator tossed in his opinion. Actually they had thought that it’d be a much simpler hike and finish it in no more than 3 hours. The steep climb had deceived them and they had not set any initial plans. They planned their way en route. But all of them couldn’t agree more, the walk was worth one – through the farms, onto mildly inclined grassland, on the back of barren rocky hill; from top to top of hill.

It was 3.30 already and they still had to walk some more distance according to the locals. So, they marched on from there towards Bhanjyang Pokhari with some hope to see Ram dai dozing off inside the grey van.

2. The steep climb had deceived them and they had no set initial plan. They planned their way en route.