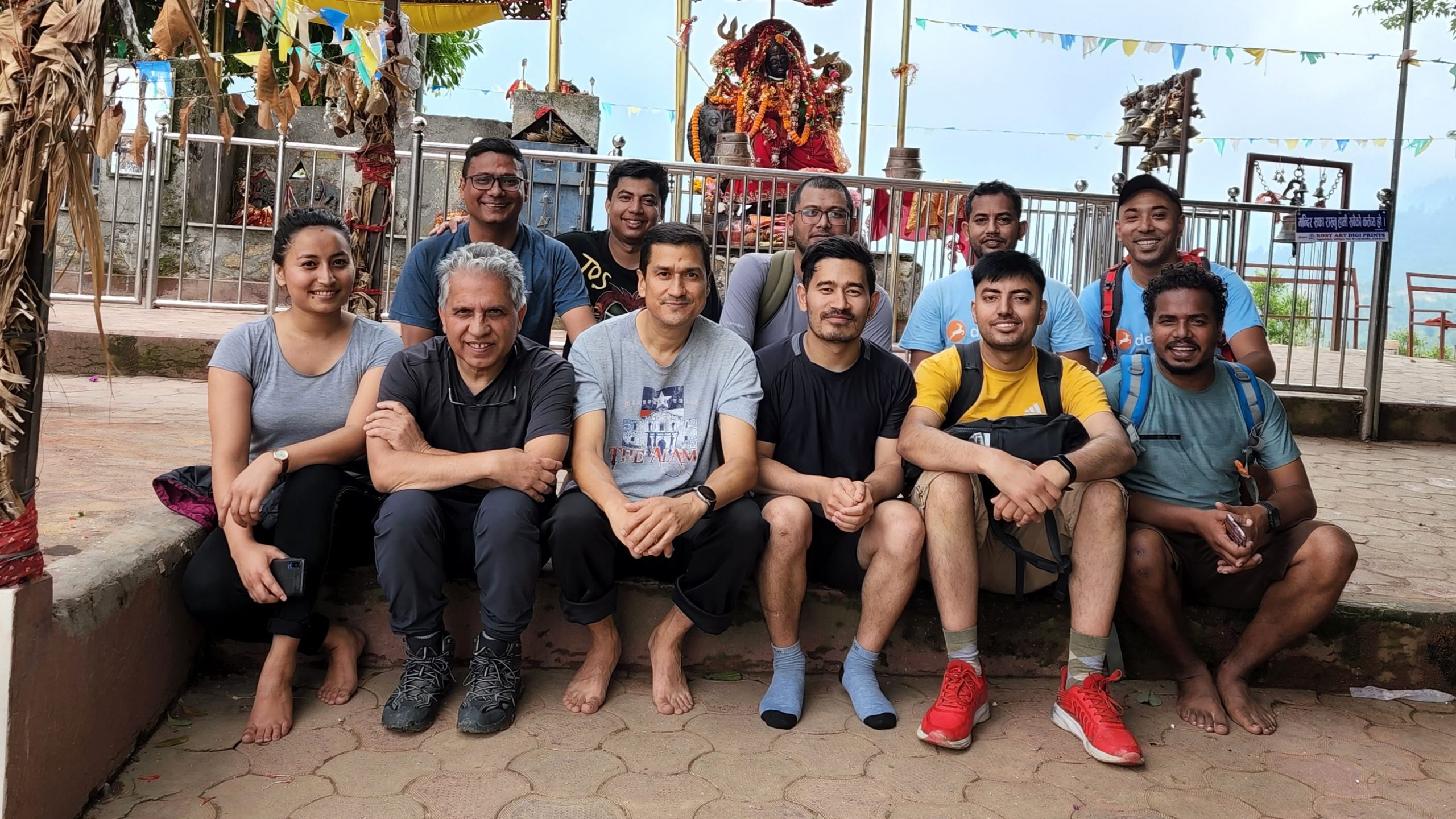 Deerhold’s regular Saturday hike was shifted to Sunday. As an indication of something special going to happen in my journey yet to come, I got an email notification saying “you’re in for a hike”. 28th May was not an ordinary day for me, full of excitement and thrill.

On May 29th, 2022, we gathered at the office premise at around 6:30 in the morning to meet all those excited eyes eager to feel the hike and capture the beautiful scene with their bare eyes. Suddenly, it started to rain while we were having our breakfast. Initially, the rumor was about Lakuri Bhanjyang, and we got information about leeches (a parasite that sucks blood) are active when it rains, and on the way they might trouble us. So, we had to change our plan. We decided to hike from Lele to Tika Bhairav via Pathibhara mandir and Dalchoki.

The hiking journey started as we departed from the Deerhold office to Lele on our Office van. Lele is a village in the Lalitpur District in the Bagmati Province of our country, Nepal, which is 14 km away from the capital city, Kathmandu. Following our Hindu rituals, we started our hiking journey by worshiping at Lele’s Saraswati mandir.

Starting from our entry point, we found stiff climbing via the stairs while hiking. We found small traditional houses on our way that looked beautiful and were totally different from urban life. We also met local villagers, and they were truly lively and cooperative. Hey, have you forgotten about our scare factor? Leeches were all over the route; they were not going to let us walk without worrying. We continued our hike and reached Pathivara temple, which is an example of  humanity. The temple is located in the eastern part of Nepal, in Taplejung. Most of the people go because they understand the significance of Pathivara Mata, also known as AdiKali, Maha Maya, or Maha Rudri. Since it is situated in eastern Nepal, many people find it hard to visit even though they have the strongest will. As a result, one of the locals in Nallu, Lalitpur, a short drive from the Kathmandu Valley, proposed building the Pathivara temple on Nallu’s hill. He approached this and finally built the Pathivara Mata Mandir in Nallu in 2067 B.S.

We stayed at Pathivara Temple for about 45 minutes, worshiped Mata Pathivara,  and we had lots of fun there. Our hiking group was joined by our organization’s  founder, Mr. Rudra Raj Panday which made hiking more exciting. He initiated the Push Up competition. Myself, Sandeep Sada, and Bishal Giri participated in the competition and finally Bishal Giri was the winner. Leaving Pathivara temple, we continued our hike and reached DalChoki, which is around 2300m above sea level. DalChoki is part of Konjyosom Rural Municipality in the Bagmati Province of central Nepal. It is situated in the southern part of Lalitpur district, nearly 23 kilometers from Patan, its district headquarters. There have been many myths related to the naming of Dalchoki. Some believe there were 3 goddesses: Phulchoki, Dalchoki, and Sanchoki; and the name Dalchoki was given after the goddess Dalchoki lived in this location. Dalchoki has a temple dedicated to Dalchoki Devi. During the hike, there was heavy rainfall. We walked wearing raincoats, and we were also in a dilemma about which path to follow. Fortunately, there was network coverage by Nepal Telecom and Google helped us find a path. We also took help from a local villager to find our way back to Kathmandu. We finally reached Tika Bhairav but found some issues; the extraction of sand, pebbles, and stones in the Nallu river is destroying natural mountains and its beauty.

Starting our hiking journey, we were worried, especially me, whether we would succeed or not, but the hiking was awesome. We had lots of fun; we explored lots of things; we captured all those beautiful moments; and we learned a lot of things from our senior members and colleagues. I got the opportunity to interact with the top management officials who joined our hiking group. We discussed our organization’s goal, vision, mission, and growth while hiking. I would like to thank Deerhold and the whole team for joining me on the hike. We had some visuals captured during the hike.