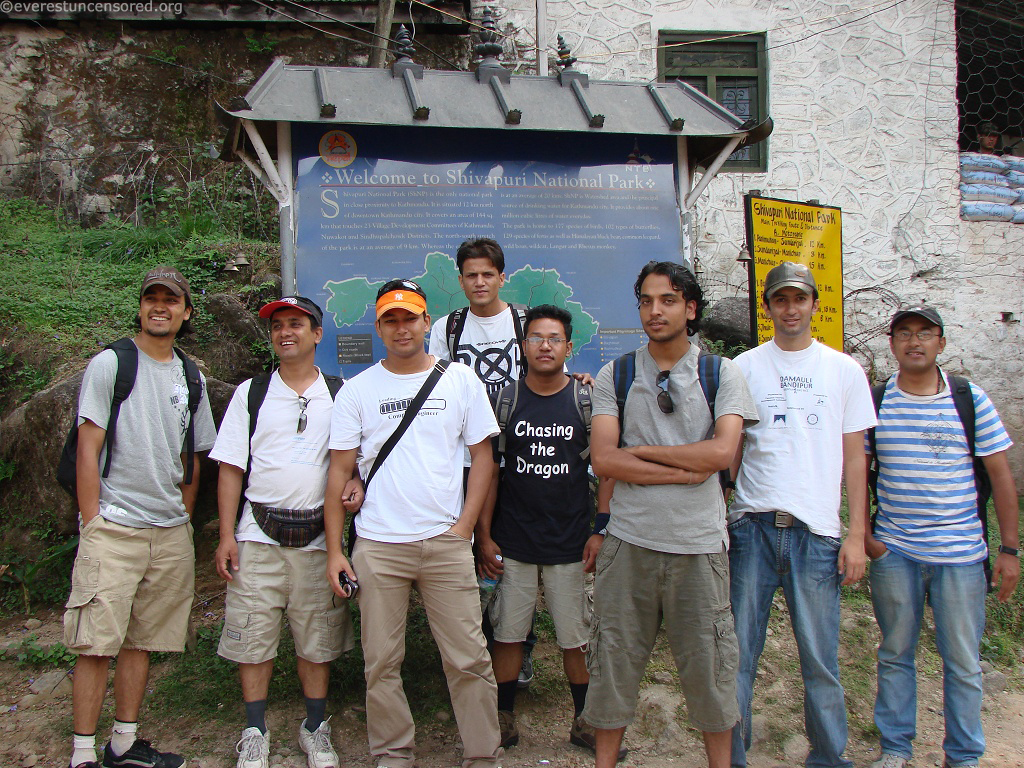 A day to remember! Not just because it was the longest day of the year; also, because it was the day that Surendra had decided to give a bit of outing to the Interns. As adventurous as the word adventure itself goes, that is what actually happened with this hiking. We left D2, thinking that we’d hike the beautiful places of Nuwakot, but things turned around on us when we got set back at the Balaju bypass as it was blocked by few protestors. We hadn’t realized that it could be a bandh anywhere. We had to change our plans instantaneously. We then discussed on different places to hike. At the end, all of us consented with the peak of Shivapuri. And now the story goes like this!

We hadn’t realized that it could be a bandh anywhere. We had to change our plans instantaneously.

The schedule to leave D2 was @ 6:30 but it was only myself, who reached D2 @ 6:35 and still became the first one to reach D2. And slowly, others turned up. Surendra also showed up after 25 minutes. And finally we were 9, who headed to Nuwakot.

But, then Manoj also turned up @ D2. And as we were already on our way, we decided to have breakfast at Gongabu and wait till he’d join us. But he overtook us and reached Balaju bypass from where we had to make our way to Shivapuri. Now the thrill had begun as we reached the double figures in number.

We came to know about the baba’s living style and medical herbs they use.

It was already 9:00 am when we started our hike but the sun was on the cool side as we were going through the shades of jungle. So, we thought that the hiking was going to be a pleasant one. And then we decided to move on and on. The first planned route was from SCA gate to Naagi Gumba- to baghdwar to Shivpuri peak and to Cha gaun to Pani Muhan and back to SCA gate. But as we started moving, the plan to approaching to the peak changed, so we headed from SCA gate to Pani Muhan to Shivapuri peak to the baghdwar and to the naagi gumba and back to the SCA gate.
The route looked pretty much easy at first but once we started to climb the hills then the hike started showing its true colors. The hiking started getting pretty tough on us. The experienced guys made their way easily and it was for us that they had to wait and wait and wait. And still there was no trace of ours, showing up. It was Sanjish who was finding hard to even walk an inch and needed a rest after every 10 steps. We could say he was following his baby walk. Prajwal was having a kind of height-o-phobia. But still, we made our way to the peak , taking pictures, and steadily walking, making to the right, in the mid afternoon where again, we had snacks. The photo session started again. The beautiful view of Kathmandu valley and the hills just made our day. We then decided to make our way back to SCA gate, our starting point. While we were returning, we sat there for a while. Also, while in Baghdwar, we had a short chit-o-chat with the Indian Babas. We came to know about the baba’s living style and medical herbs they use. After 2 hours of descending from peak, we further reached the Naagi Gumba where, again we had a little tits and bits and a bit of photo session. It is 3 kilometers from Naagi Gumba to SCA gate. We could still get the full view of the sun.

Finally, we reached SCA gate after an hour walk and we headed back to the city. The only other setback for us were the guys who were on their half pants and they were bitten by the local insects. They are still complaining about it.

11 thoughts on “Hiking from Budhanilkantha to Shivapuri”