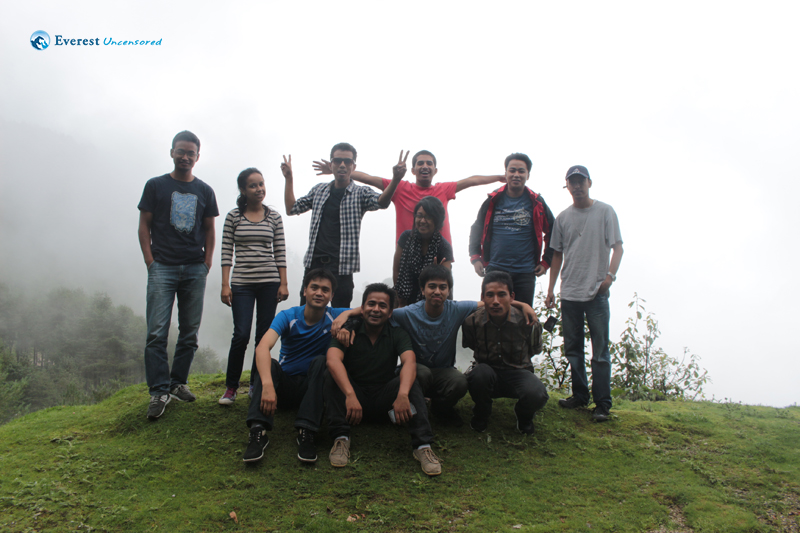 After a long and somewhat tedious bus ride from our Deerwalk complex, we arrived at Dolakha for a fabulous lunch. We still had a long way to go till our final destination but, considering we were on schedule to reach there before nightfall, we decided to take a short detour and visit the Dolakha Bhimsen temple. This also gave everyone a chance to relax and stretch their muscles and not to mention to take a few photos around the beautiful temple. Then the journey continued along the winding roads providing us with some great views.

On our way to Jiri, we had already faced the capricious weather and on arrival we were informed that the rain here was even more unpredictable than in Pokhara. Even so, we all went out for a short walk to look around the near by Stupas and to accomplish Sushil’s ‘Quest’ to find greenery and the river. And then came the inevitable rain to greet us. As we raced back to our hotel, a new quotation was formed : “ma bhije bholi cetamol khayera thik bhai halchu ni, camera ta bachaunai paryo!”

The night was still young and we didn’t really have anything planned. So as everyone was getting ready for dinner, Ashish dai introduced us to a new card game called warrant, similar to Uno, and after suggesting a little tweak in the rules here and a bit there, the game changed into something that would involve everyone and, at the end of the night, everyone would have had a night to remember but wouldn’t, if you know what I mean ;). So as the night went by, the game continued and the people started getting noisier, the room dirtier and the music louder. Some played the guitar, some sang, some banged the bottles and had it dubbed “drumming“ (Ashish dai, Deepak dai and Sushil) and some just listened to the wonderfully chaotic sounds of our music in awe till tiredness would get the better of us and everyone just headed to bed, for we had a long day to look forward to the next day.

The Next day:
With everyone up and ready to head out by 6, our hike began. With a bottle of water each, a packet of salt and some snacks, we started our hike uphill towards the Cheese factory.

The trail, slippery and uphill and full of leeches, made it a bit more… umm lets call it adventurous than normal but fun nevertheless.

The trail, slippery and uphill and full of leeches, made it a bit more… umm lets call it adventurous than normal but fun nevertheless. Walking and talking in small groups, we headed uphill with our guide Deepak dai. Eachtime we turned around we looked at the Jiri Market view in admiration, wanting to pose for a picture and Aawart dai was ever ready to click. The trail got steeper and wetter and our feet served as a massive feast for the leeches, red and black and of varying sizes. The cloud would keep catching us and passing us from time to time rendering our vision to zero, but that wouldn’t slow us down, for we had cheese waiting for us up top.

When we finally reached the factory after about 2 hours of hiking, I was disappointed to find out that there were no Yaks there. I was looking forward to seeing one. But no matter as there was cheese and plenty of it. We also learned a good deal about producing cheese and saw all the equipments used. Plenty of fire wood and limpid water was available and very well utilized up there . I was very amused by the fact that they had taps there, but its always open, water running everywhere. So much water, so clean, so fresh. So anyway, the point is there was a lot of cheese and we bought plenty. The view was excellent as well. Jiri, right in the middle of hills right alongside the river. It was fantastic. Lets see Switzerland beat that, view Vs view, Yak cheese Vs Swiss cheese. No competition!

So with that I’ve probably run out of interesting things to talk about. We returned home leaving behind such beauty to head to our dust filled city. Sounds dumb doesn’t it? But thats life…

Barsha Sharma Bhattarai
This was my first hiking from Deerwalk, and I was lucky enough to be with my project teammates in this hike; so as I knew everyone, I was really excited about the hike. Our destination was Jiri which was also claimed to be the ‘Switzerland of Nepal’ by many as there was resemblance in the natural beauty between the two. And sure enough I was profoundly spell bound by the beauty that greeted us on the way to Jiri, as it came in all sort of natural form.

I was mesmerized by the welcoming waterfalls, rivers, jungles and peaceful green hill slopes along the way as we carved our way through the fog that was constantly playing hide and seek throughout the journey.

I was mesmerized by the welcoming waterfalls, rivers, jungles and peaceful green hill slopes along the way as we carved our way through the fog that was constantly playing hide and seek throughout the journey.

After reaching Jiri at the evening, we freshened ourselves up and after little snacks we strolled around the local market; but soon found ourselves back at the guesthouse because it rained . Early morning the next day we made way for the Cheese Factory for which we had to hike through 3-4 hills. It was tough task with the high inclined slippery path filled with blood thirsty leeches. But it was worth the trouble because we got what we wanted, a day up close with nature.

But what I will remember was the fun we had the earlier night when we indulged ourselves in various games , singing songs and dancing. It’s companionship that make moments even merrier and we were among the best of company. Time passed with amazing moments that I will cherish for many years to come.

Hemanta Shrestha
Journey to an unknown place always thrills me. Jiri was a new place for me and my excitement was heighten by the fact that I was going there with many of my project mates. I had heard about its natural beauties and now I was going to witness it . We set out for Jiri Saturday morning at about 7 and from there the thrill was on. A constantly changing weather gave justice to the phrase ‘as changeable as weather’ . A moment we were surrounded by fog and in a moment we were back on a sunny track and the next it was raining. Road leading to Jiri was filled with as much natural wealth as destination itself was cited for.

Countless waterfalls, jungles , green slopes and astounding beauty at Khari Dunga were worth mentioning to say the least.

Countless waterfalls, jungles , green slopes and astounding beauty at Khari Dunga were worth mentioning to say the least.

We reached Jiri late afternoon and after a small regrouping we were back on road examining the local habitant. While we were doing so we got beaten by rain , such was the unpredictability of the weather there. Returning back to guesthouse we gathered around playing games and music after dinner. Nothing could beat the moment , the sound of plastic bottles beaten together in a non rhythmic melody and everyone’s voice topping each other’s, trying hard in a vain attempt to sing a beautiful song along with guitar and a little bit of dancing too. That was certainly the highlight of the trip , as it proved we only needed friends to change a moment into a memory worth remembering a long time.

Next day early morning we hiked though a few hills and reached Cheese factory. Again beautiful view greeted us there . Time was of essence as it always is, we hurried back as we had to reach Kathmandu by the end of the day. This trip will always remain close to my heart, not because I had so much fun and witnessed such a wealth of natural beauties, but because I did all those things with the people I cared about ,with the good friends I have here in Deerwalk.