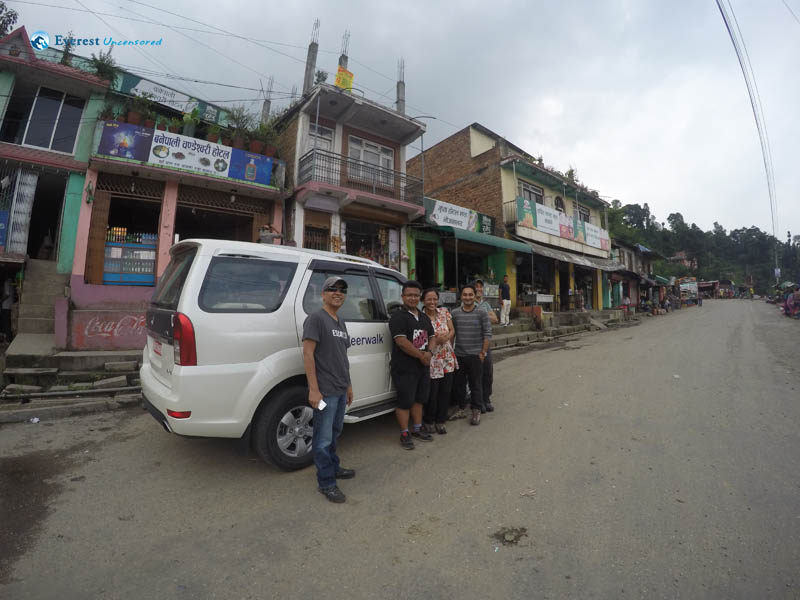 Dibyamshu Shrestha
After about one month of my internship at Deerwalk Service and 3 weeks at Deerwalk Institute of Technology, I got the opportunity to visit Upper Mustang along with Rudra Dai, Hitesh Dai, Charu Di and Jeevan Dai. We had no idea how long the journey would be, or how much we were going toe hike. However, what we did know was that exploring Upper Mustang was going to be a spectacular experience. Much excited, we set off on our journey on 4th July 2015.

Day 1: Drive from Kathmandu to Tatopani

The five of us gathered at Deerwalk Complex at around 7:30 in the morning. After all the team members had arrived we left the office along with Kedar dai. We stopped at Naubise for breakfast and at Ramailo Dadha for tea. We reached Pokhara at around 1:30 PM, where we stopped for lunch. After we crossed Beni, the drive was off road and Kedar dai faced some difficulties while driving. We reached Tatopani at around 8:30 PM, where we stayed for the night.

We got up early around 6:00 in the morning. After tea, we continued our journey. The road was rougher than that of yesterday Even the ride was tiring because of the numerous bumps on the road. We kept being thrown around the vehicle. The river at Rupse Chahara was difficult for our vehicle to cross. It was then when we decided to continue our journey by hiking. Thus, we bid farewell to Kedar dai, who returned to Kathmandu with the vehicle, and began our hike.
Hike from Rupse Chahara to Ghasa

We began the first hike of our trip. The trail was slightly uphill. We were not mentally prepared for that walk, as we thought that the first leg of the hike would’ve been easier. Soon, we began to feel tired and had to slow down. After nearly 3 hour of walking, we finally reached Ghasa.

Drive from Ghasa to Jomsom

At Ghasa, we got into a local bus that was packed, but fortunately, all of us managed to grab a seat. Almost halfway through the journey, we were stopped because a broken down truck had blocked the road and the bus could not pass. As a result, we had to wait for the bus coming to Ghasa from Jomsom. We got in the bus and then continued to Jomsom.

After reaching Jomsom, we had a late lunch at around 5:00 PM. We then rested for a while and then went sight seeing. The beautiful scenario was indeed mesmeric.

Day 3: Hike from Jomsom to Kagbeni

We got up early in the morning and started our hike from Jomsom to Kagbeni. Since the trail we took was the same path as for the vehicles, the hike went smoothly for most of the part, except for some short cuts. The view of Jomsom and Kaligandaki as we hiked was spellbinding. After walking for 3 hours we reached Ekkal Bhatti where we stopped for breakfast.

We continued our hike from Ekkal Bhatti to Kagbeni, which only took us 45 minutes. As soon as we reached Kagbeni, we reserved a jeep for Chhusang.

Drive from Kagbeni to Chhusang

The drive from Kagbeni to Chhusang was the most amazing part of our journey. The scenario just became more and more enthralling as we headed to Chhusang. None of us had expected Upper Mustang to be so beautiful and picturesque. The magnificence of the place mesmerized us. The geological formation of the region was one of a kind in Nepal.

The drive from Kagbeni to Chhusang was the most amazing part of our journey. The scenario just became more and more enthralling as we headed to Chhusang. None of us had expected Upper Mustang to be so beautiful and picturesque. The magnificence of the place mesmerized us. The geological formation of the region was one of a kind in Nepal. All the structures of hills and rocks had unique carving with symmetrical structures. After 2.5 hour ride, we reached Chhusang.

Drive from Chhusang to Tsarang

We had our lunch at Chhusang and reserved a jeep to Tsarang. As jeeps could not cross some parts of the road, we had to change our vehicle twice. The vehicle committee of Upper Mustang had good organization in changing vehicles so the transition between moving from vehicle to vehicle was very smooth. The total journey was about 4.5 hour drive. The drive was entirely off-road and we had to hold on tightly in order to stay firmly in our seats. We reached Tsarang, located at a height of about 3600m, in the evening.

After freshening up at the lodge, we went to tour the Tsarang village. First, we went to Ghumba, which was believed to be 800 years old. All of us meditated for 30 minutes inside the Ghumba. Then we went to Tsarang Palace from where we could see the entire Tsarang village. Tired from the day’s activities, we decided to return to the hotel and turn in for the night.

We started our hike at 6 in the morning. The trial was slightly uphill. It was a straight 5.5 hour hike and there was no village on the way. There was no place even to get water. But the majestic sights we saw after reaching Lo Manthang was worth it. No picture of the place could have ever done justice to the amazing landscape that was spread out in front of us.

We went for a short village tour where we took a walk around the village. We then had our lunch, and reserved a jeep to Chhusang.

Drive from Lo Manthang to Chhusang

We took the same road back, from where we had come from Chhusang to Lo Manthang. There were only the five of us in the jeep, so it was a comfortable ride. We enjoyed the beautiful scenery from the windows. We reached Chhusang at around 6 PM. According to the rule of the committee at the Upper Mustang, no vehicle could leave after 6 PM. So we had to spend the night at Chhusang.

Day 5: Drive from Chhusang to Jomsom

We got up at 6 in the morning and headed straight to Jomsom. As soon as we reached Jomsom, we went straight to the airport. We didn’t have tickets, but luckily, we got the last flight of the day from Jomsom to Pokhara.

Flight from Jomsom to Pokhara

We flew within 15 minutes after reaching the airport. The flight was of about 20 minutes. The plane flew very close to the hills and at one point; it flew between the two majestic mountains, Dhaulagiri and Nilgiri.

Drive from Pokhara to Kathmandu

After reaching Pokhara, we had to wait for an hour for Kedar dai to arrive. As soon as he reached Pokhara, we headed straight to Kathmandu. We stopped for lunch at Riverside Spring Resort and then at Naubise for some tea and snacks. Finally, we reached Deerwalk Complex, Sifal at around 7 in the evening.

This trip has certainly been the first of its kind for me. Having done lots of trekking and trips with friends and family previously, this was my first trip with colleagues. It was also a nice break for me after my internship as my holidays were coming to an end. Huge thanks to Deerwalk for this wonderful opportunity and to all those who accompanied me on this trip and made it once-in-a-lifetime experience. It’s true what is said about Upper Mustang. ‘If you have not visited Upper Mustang, you have not visited Nepal.’

One thought on “The Upper Mustang Trip”