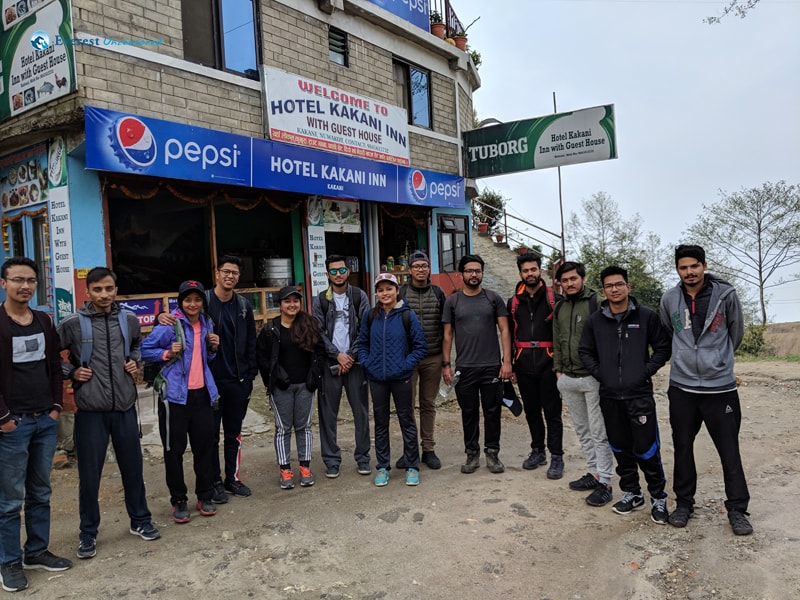 Nirajan Rijal
Day 1
The excitement of my weekend schedule, which would include two-day hike to Kakani, kept me from going to bed peacefully on Friday night. We all gathered around Deerwalk at 8:30 am, where we loaded all the necessary supplies in the vehicle and got ready to move out.
Our planned hiking route was from Gurje Bhanjyang to Kakani for the first day. We set off from Deerwalk in the office vehicle at 9 am. On our way, we stopped by a place to have a little breakfast before the hike. Then, we headed towards Gurje Bhanjyang. Unfortunately, the road to Gurje Bhanjyang seemed to be under construction and was too bumpy at some points. The road was not good enough for the office vehicle, so we had to carry our backpacks and walk for around 40 mins to reach Gurje Bhanjyang. Once we reached Gurje Bhanjyang, the road signs pointed us towards the direction of our destination.

And just like that, we officially started our hike around 11:00 am. Everyone was excited and full of energy. Along the way, we took pictures, made videos and generally had a very good time. We rested from time to time as we hiked along. Two of our hikers got lost in the woods while trying to look for a shortcut. Later on, we met them near army barrack. Then, we searched for hotels to stay overnight.

By the time we found a hotel, we were all tired and hungry. A barbecue and bonfire were up next. After having some barbecue, we played some games and then we called it a night and went to our respective rooms to rest.

We woke up at 7:00 AM, and were welcomed by a chilly morning breeze. We had breakfast at the hotel. We left for our second day hike around 9:00 AM. We went towards Panchmane. The way was slippery and one of the hikers fell down in the woods. We reached Pachmane around 2:00 AM where we had our lunch and Deerwalk’s van was waiting for us.

Shaswot Joshi
Day 1
As this was my first 2-day hike, you could say that I was pretty excited about it. I arrived at Deerwalk complex around 8:20 AM and we left for the hike at around 9 AM after we loaded some supplies for the hike. On the way, we picked up Pratik dai and we had our breakfast at Samakhusi. Whit our stomach full we headed for Gujre Bhanjayan. On the way to Jhor the road got bumpy as it was under construction. And to our luck, the driver told us that the minibus would not go further as the road was too messed up for the minibus to pass by. So, our hike got extended by around 1 hr/40 mins.

We started our hike at around 11 AM, the way was all uphill until we reached a signboard that said Kakani. We rested for a while around the signboard while some of us got tickets to enter the reserve. We had a lot of fun on the way we also took a lot of pictures too. Somewhere around Suryachaur we lost our way and had to climb a hill where two of our hiker lost the way because they took a short cut which wasn’t at all shortcut. After we reached the army camp we waited for the other two hikers that took the shortcut. We met with them and headed to look for a hotel to stay the night.

After we booked rooms for us, we had our lunch as we were very hungry. Then we asked the manager there to set up a bonfire/barbecue. We played a game called Murderer and as the night fell we headed to our respective rooms to rest.

We woke up around 7 AM and found out that had rained overnight. I was pretty sceptical about our way back as I thought it would be very muddy. We had our breakfast and we left for Pachmane. To my expectations, the way was not muddy at all and we didn’t let our fun die on our way back. On the way, we picked some Lali Gurans(Rhododendron). We rested for a while and arrived at Panchmane around 2:00 PM where we had some snacks and hopped on the minibus.