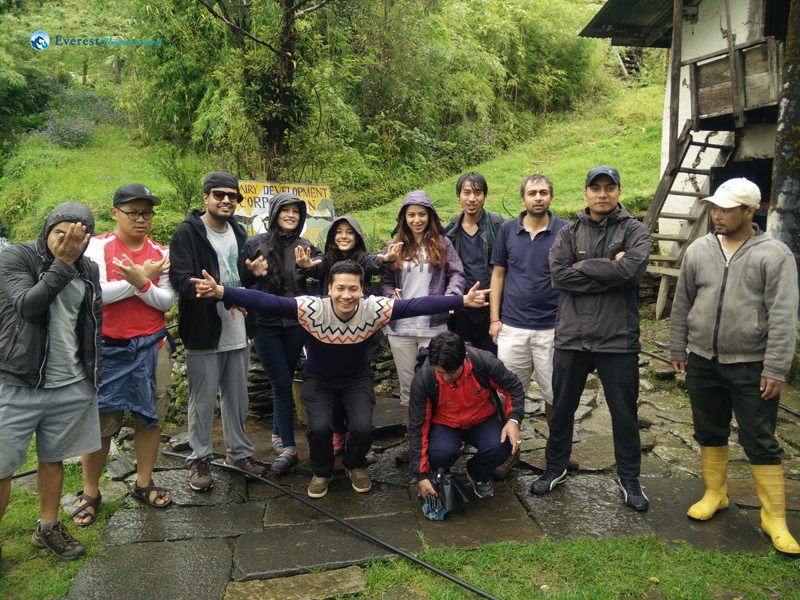 I am very fond of hiking and hike announcement to JIRI was a dream comes true. The first list of announcements were made but I could not find my name in the list and I felt like my dreams were shattered.

So I persevered to chase my dream rather than let it go.

I only knew one thing I WAS GOING TO JIRI !. When you have strong desire nothing remains so difficult, my name was announced in final list of hikers.

I woke up at around 5 AM, very excited, completed my daily routine and took off from home to office as I was joining rest of members at office. Starting moment of my trip, it was a bang it started with Sanjay Dai and my Carom game and guess what, I lost by 3-0 and this is how my trip was kick-off. After 20-30 minutes we were out of office premises as our designated tour guide Umesh Dai reached after refilling fuel in our vehicle. At around 6:45 we all left from Koteshwor for our destination. We were all set with itinerary in our hands showing all the details of our tour, after a while then there was a short stoppage near Banepa. This was the time when Shyam was all energized and his vocal was all around our mind, fresh air and the songs were really mesmerizing. We stopped for breakfast at a motel in Dhulikhel. We had some snacks at Keraghari and after we had breakfast we started to resume our journey. The gravel road, rainfall followed with fog made road visibility challenging and sharp twist and turn of roads was very adventurous.

At around 1 PM we reached Charikot, Dolkha and had sumptuous lunch. We had decorated Nepali meal with curries of our choice and to make the experience better the weather was getting chillier. We stopped at Charikot for about an hour and again started our journey. On the way we had some short period of rest and took photos. And at around 5pm we finally reached Jiri. The tiredness and pain in body was all lost when we first stepped in to Jiri. After we reached there we went to room which were specified for us and agreed to meet after half an hour in restaurant which was on ground floor. We had tea, some snacks and started playing cards. After a while some of us went to visit local market and it was awesome. All the hills were covered by Fog as it was cold. When we reached at hotel rest of our friends were busy playing cards it was really a fun moment. We enjoyed our dinner with local chicken masu and celebrated victory of Manchester United.

On the next day we woke up early in the morning, freshened up and moved for the hike at around 6.30 am. We finally reached our destination, Chordung Cheese Factory after three hours of continuous hike, there we had yak milk and cheese. We all bought yaks cheese from the cheese factory the taste of which is particularly local. After grabbing snacks we all were energized and started to walk back to our hotel, while returning by we had some hindrance like leeches and slippery track some of us were skated by muddy track, but nothing that we couldn’t handle. The view of mountain was amazing and the mountain range view was so heart touching and gave peace to our mind and soul peaceful.

At around 9PM we stopped by at a small shop in Dolaghat to have tea and take some rest and be fresh. Umesh dai being the awesome pilot as he is, drove us back to Kathmandu in just about an hour. Our short yet sweet trip to Jiri was full of laughter, fun, team work, friendship, nature and amazing memories; I can’t wait to explore other places of Nepal. Thanks, Deerwalk for giving us this opportunity, CAC team for organizing this hike and Parakram – Ganga for outstanding management.

Needless to say, I was happy as well as excited that I got chance to be in the list of hiking team to Jiri. The hike was set out to be on 24 th to 25 th of September 2016. I was excited for the trip because I was never been to Jiri before and I got this opportunity to be in the team of jovial and helpful people.

On the day of trip, I woke up around 5 AM and I freshen up and walk myself to New Baneshwor because I was joining my team from there. At around 6:30 I joined the team at New Baneshwor and the wheels hit the road towards the destination. We picked up some friends on the way and had little discussions about the hike. The fresh air of early day was mesmerizing. As I can remember it was very much exciting with all the amazing people who was very much fun to travel with. On the way we took breakfast at a hotel. We had omlette and Chana with black tea in our breakfast. And after we had breakfast we started to resume our journey. The heavy rainfall really challenged our journey and road was challenging too. The graveled road added with rainfall was very dangerous as well as exciting. The excavator was present alongside the road for the maintenance of road. At around 1 pm we reached Charikot and had lunch. We had normal Nepali meal and the rain hadn’t stopped yet. At charikot I got an opportunity to met my +2 friend and made my journey more memorable.The weather was cool due to rain and also of hilly region. We stopped at charikot for an hour and again started our journey to Jiri. On the way we had some short time rest and took photos. And at around 5pm we finally reached Jiri. It was so good to be there, the cool breeze, the place after rain and its overwhelming view. The tiredness was completely eased off by the amazing beauty of Jiri.

After we reached Jiri we went to our hotel and freshen up ourselves and had some rest. We had tea and some snacks at the hotel. And after some time some of the friends went to visit the local place and we started to play cards. It was cold and the hills was covered with fogs. After playing cards for some time all of the friends had arrived at the hotel and we started to have drinks and some of the friends were dancing. It was really a fun moment. And after having drink we had our dinner and at around 10.30 pm we separated and went to our room.

The next day we woke up early and freshen up ourselves and we went for the hike at around 6.30 am.

It was quite a challenging hike.

It took us about 1:45 hr to reach our destination which was the cheese factory. There we had Chauri gai’s milk and some breakfast. We all bought the Chauri’s cheese from the cheese factory.Also we ate some there too. It was so good because it was local made and hygienic. Some of our friends was tired after the hike and decided to take rest. We had selfies there. The view was amazing. We saw the mountain range from there and it was so peaceful. After some rest we started to climb down.

At around 11 am we reached our hotel. All of us were tired and decided to take some rest at the hotel. Some of the friends was glancing at their photos and some of us just laid on the bed. After taking some rest we started to pack our bags and gather around. Some of us was too lazy to get up, and some of us was already packed the bags. At around 1 pm we checked out from the hotel and got on the bus. On the way back it started to drizzle and the weather was cool. Some of us fell asleep and I was just looking outside the window and was glancing at the beautiful Gauri Shankar mountain range. It was so peaceful. I was starving and had some chips on the bus. We already planned to had lunch at Tamakoshi and we reached there at around 3:30pm. Right after the bus stopped I went to the bathroom. We washed our hand and got ready for the lunch. We had rice with fish. It was so good, the fish was from the Tamakoshiriver and was fresh. After having lunch we took some rest. Some of us went to the river. The flow of river was high. And after taking some we started to hit the road. Umesh dai was so friendly and helped us a lot in the management of lodging and fooding. We had our little chats on the way back. Some of us started to tell jokes and we had our laughs.Specially the jokes cracked by Shyam and Aakash are still in mind and made me laugh. I fell asleep for some hours and when I woke up we had already reached Bhaktapur. It was around 11pm we reached Kathmandu. The bus took all of us to our home.

Altogether, the trip was so momentous. The fine trip with the most amazing company of every single member. I will be in debt to all of you people and want to hank you all members, coordinator and mostly Deerwalk Inc. for providing such a great opportunity to me as well as the Deerwalkers.