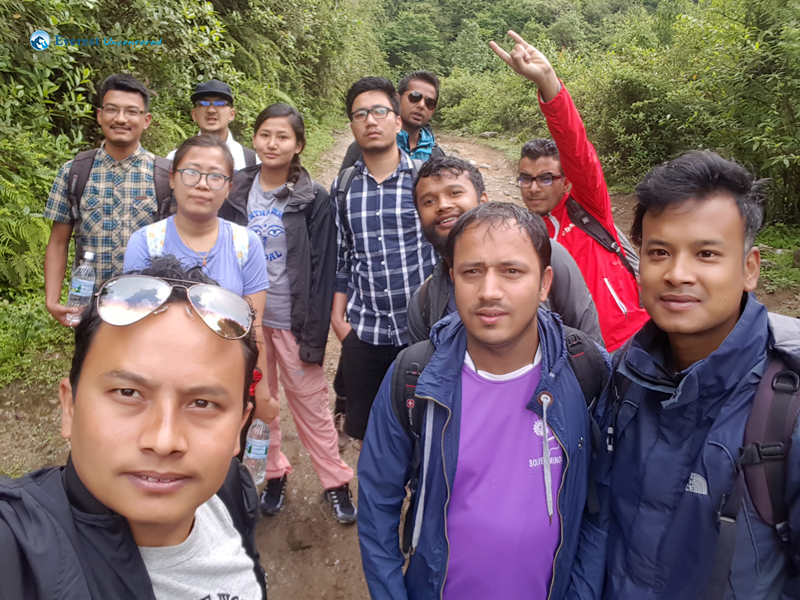 Amongst the numerous hikes that I’ve been since joining Deerwalk, this particular one was the most painfully pleasing and rewarding hikes of them all – a proper one where we actually walked for hours.

Day 1 started from the foothills of Sundarijal all the way up to Chisapani. The steep hill climb is known to challenge the experienced hikers but me being amongst the weak hiker in the group, it was almost like I was playing ‘catch-up’ with the rest. One moment they were right there walking alongside me, and the next moment they were gone – out of sight on to wilderness along the trail ahead. It seemed as if only my flailing legs were taking its toll on the overall group’s pace. The occasional heavy downpour didn’t help either.

Walking along with our raincoats and umbrellas, we were not ready for what was lurking around us in the bushes. Yup, Leech Attack!

Walking along with our raincoats and umbrellas, we were not ready for what was lurking around us in the bushes. Yup, Leech Attack! It gives me the creeps just thinking about those creepy-crawlies. But with much hustling and bustling, we finally made it to the aptly named hilltop of Chisapani where we spent the night. Once we reached up there, although the thought of local white wine that we could definitely smell brewing nearby seemed smoothing, we settled with beer and soon the loud obnoxious singing and the weird dancing followed all through the night as expected.

After the painstaking hike of the previous day, the hike down to Chaukibhangyang the next day on our way to Nagarkot was rather uneventful. Occasional snacks, wild berries and seasonal fruits along the way was definitely pleasing to the tongue. Speaking of which reminds me as the highlight of day 2 hike, the Thakkali Food – or as I’d to call it soul food! Our mouths had been so attuned to the usual food from our same old canteen. Plain and simple local Dal Bhat in Chaukibhangyang was a real mouth-watering treat. We feasted like animals, so much so that a couple of hours of hike up to Nagarkot seemed impossible with our filled tummies. So we called it a day and asked for the driver dai to pick us up.

Although this being an off-season, the view of the Himalayas was almost non-existent, but all in all the hike was fun to say the least and was a great breakout from the humdrum of hectic office life.