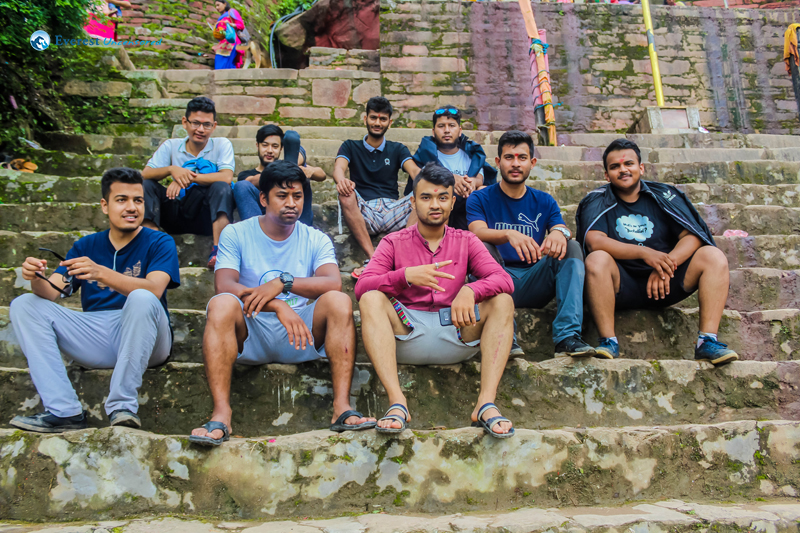 It was raining heavily on Saturday morning when the bus left Deerwalk premises for Bandipur. The incessant rain became a very good excuse for those people who arrived late. Some hikers could not make it to the college and hence waited on the route. After all the seats were filled, the van started to head towards western exit point of the valley – Naghdhunga. There were no traffic congestion while moving out and hence the ride was smooth.

As the van was moving down the winding road of Naubise, the hikers inside the bus was enjoying the tracks of interchanging bollywood and English songs. The hikers were also goofing and laughing with instant jokes cracked. Along with the crave for fun and enjoyment, everyone was hoping for the van to stop at some tea stalls or restaurants for breakfast. The van finally came to stop at Naubise Bazar and everyone rushed out of the van towards the restaurant. They were served with delicious jeri, puri, tarkari, and tea.

The breakfast ignited new energy in everyone and the sounds of laughter and number of jokes multiplied by three folds than earlier. The speed of van had also multiplied as there were very few vehicles plying on the Prithvi Highway. From the van’s window, we could see green trees freshed by the night’s rain, the volume of water had increase extravagantly with the continuous rainfall in past days. The site of woman collecting fooders mesmerized our eyes. With the site of waterfall, everyone in the van requested for a stop. There were a lot of photographs taken in the background of the fall.

The van started to speed up and there was continuation of laughing, listening to bollywood and English tracks, and cracking jokes inside. As per pre-plan, we stopped at Lamo jharna. There were swimming and bathing. Taking photos for social networking sites was mandatory and everyone was posing in front of a phone or DSLR. Some of them were also collecting contents for their next vlog. The hikers had to be forced into the van as they were glued to the waterfall.

The energy given by the breakfast was all used to swim and play in the waterfall. Everyone had already started to feel hungry again but, no one knew the good place where they served good thakali. Technology solves majority of our problem so did it this time. The place was browsed in google and it showed up thakali chulo and restaurant. The place was traced on google map and it showed up 23 Km. Every now and then, someone asked, “How many kilometers more?”

The van stopped at Dumre bazar and there was short lookout for the restaurant. The staffs at the hotel took our order and asked us to wait for 30 minutes. Everyone connected their phone to Wi-Fi and started to upload their photos on facebook and instagram. Thirty minute passed very quickly but, there was no food on the table. Thirty minutes turned into three thirty minutes i.e. one and half hour -length of one football match. Everyone was impatient and everyone engulfed whatever they could when the food arrived although it was not awesome food served. It was like what tastes good, “hunger or food.” Definitely, it was hunger at this moment. There was also Nepali cover artist Prayatna Shrestha eating in the same hotel and unfortunately no one recognized him when he was there.

After that OK lunch, we drove two kilometers back to reach our starting point of the hike. With heavy stomach, everyone started to hike uphill. No one could walk easily and everyone regretted for eating heavy lunch. As the food underwent combustion and carbohydrate broke down into energy, the feet started to move faster. The uphill terrace to Siddha Baba cave was challenging. It was straight uphill. After one hour of walking uphill with the view of river Marshyangdi downwards, we reached Siddha Baba cave – the largest cave of Nepal.

As the food underwent combustion and carbohydrate broke down into energy, the feet started to move faster.

It was pitch black inside the cave and the floor was very slippery. One had to use both hands and feets to prevent themselves from falling and it was more difficult with those expensive phones used as torch on one hand. Inside the cave, everyone switched off the flash for five minutes and started to meditate. It was very good place to feel the sound of silence. Only sounds that could be heard was the sound of dropping water droplets. We spent more than half an hour inside the cave and it gave many of them a sense of great adventure.

There were more uphills to climb after coming out of the cave too. We walked through the streams and dense forest with leeches sucking our blood for almost two hours. Everyone breathe a huge relief when we reached the hotel where we were spending the night. Almost, everyone was covered with dust from the Siddha Baba cave hence sour was must.

At the hotel, there was campfire and barbecue after the dinner. Before dinner, there was walk around the Bandipur bazar. The night view was Bazar was breathtaking. Although everyone was tired and longed for sleep, everyone stayed awake late night sharing their story and different moments of life. Also, there was a lot of laughing at the hotel rooms more louder than the laughing at the van.

The next morning, some of us went early to go and walk around the market. There were some shopping and photography done. At the hotel, there was breakfast waiting for us. After the good meal, we waved goodbye to Bandipur and headed towards Gorkha – the birthplace of modern Nepal, Late King Prithivi Narayan Shah.

After two hours of drive, we reached Gorkha Durbar. It was sad to see the Durbar being demolished and no sign of immediate reconstruction. There was praying in the Gorakhnath mandir and lunch in the Gorkha bazaar. After lunch, the van headed towards Kathmandu. While heading back, there was a lot of traffic jam and we reached college premise with great difficulty.

The two day hike was very refreshing and joyful. Lamo jharna, Siddha Baba cave, Bandipur Bazar and Gorkha Durbar was the major highlights of the trip.

Rishitosh Acharya
On December 17, The Hiking Club organized a-two-day hike from Dhumre to Bandipur through Siddha Cave. All the hikers gathered inside Deerwalk Complex around 6:30 am – 7:00 am, with loaded backpacks and were excited and enthusiastic. The bus departed at 6:15 am in the morning towards Dhumre. As the bus reached Dhumre, all the hikers were provided for lunch by the Hiking club. The breakfast energized all the hikers and they started their hike.

The hike started with some guidelines by consulting few locals. At the initial phase of the journey while walking up the hill, the tracks were normal and we were having a normal hike until a quick break for some snacks. Slowly after walking for a while, we realized that we had lost our tracks but that didn’t stop us from moving. The walk was getting more difficult after each step. At a particular moment, we observed and felt some wild animals crawling around us and we were very scared but our team spirit didn’t let us down and we kept walking further. After a couple of minutes of walk, we finally reached the Siddha Cave. At 437m deep and 50m high, Siddha Gufa is said to be the largest cave in Nepal. Its cathedral-like interior is full of stalactites and stalagmites, not to mention hundreds of bats, which whistle overhead. Scary yet so satisfying. After some rest and snaps we headed for Banipur. After 2hrs of walking along a dirt path running north over the edge of the ridge, turning right at the obvious junction. The stone path was slippery. Finally we reached Bandipur, Bandipur is the living museum of Newari culture. More than 70% building are traditional Newari houses. Which carved wooden windows and overhanging slate roofs.

A delicious thakali dinner at homestay marked the end of this adventurous and unforgettable event.