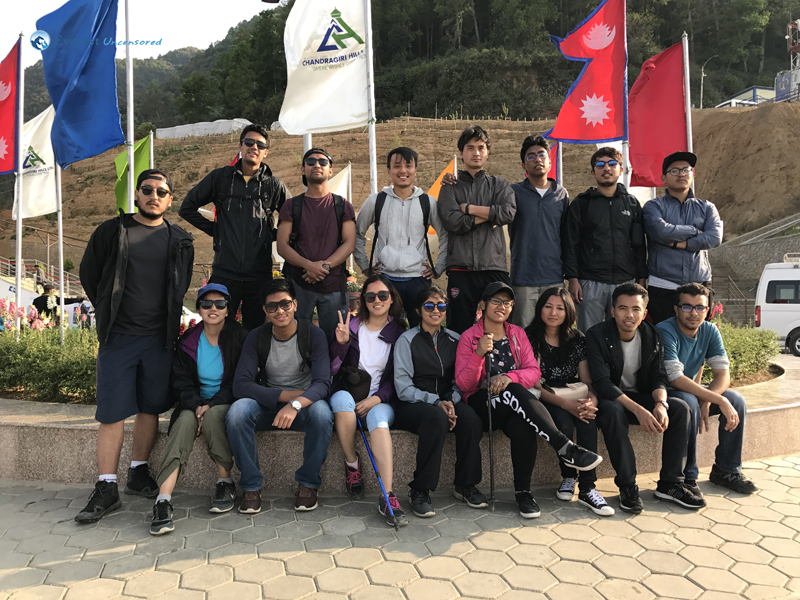 “I have found out that there ain’t no surer way to find out whether you like people or hate them than to travel with them.”
― Mark Twain

I am not quite sure why I quote him but let me pour down my thoughts and maybe we shall see the reason together. It’s been around a year I have joined the Deerwalk family and like every family is, the company too is build upon the trust and cooperation between its members. What better way to bond and know each other than in hiking, right? Well, Mr. Twain and I probably agree here.

Chandragiri Hill, which lies to the south-west of Kathmandu Valley has recently been one of the famous destination to spend time together with your beloved ones. As a place rich in both historical and mythological significance, I was intrigued by idea of hiking up there and there was no reason I could say no to. We started gathering at 7 o’clock in Deerwalk premises. Since we still were waiting for other participant, we played basketball for a while. We left Deerwalk at 7:20.

We headed to Matatirtha, a Hindu temple. Usually not so crowded, people who have lost their mother fill up the place to pay their homage to their demised mothers during Matatirtha aunsi also known as mother’s day. We had our breakfast there and spent some time there then started our hike to Chandragiri hill. The trail leads to Godamchaur through pine forests and small villages. It was a tough job going steep up for hours but, fun with companions made it easy. Empathizing each other over our common agenda of hard trek and making fun of each other’s competitive abilities at times, we had few laughs along the way that made our tensioned muscles relax. After 3 hours walk we rested in a small village named Chappbhanjyag. We took shed from abandoned Kathmandu – Hetauda ropeway, had a cup of awesome tea, snapped some photos. After resting a while it seemed we were near to our destination. Then we started again through stoned staircase getting to ever nearing top. The steep hill climbing had exhausted us all so we decided to rest for a while in a Rest Station. After moments of exchanging our tired rants with nature for fresh air, We started off again for our destination. And after half hour walk we reached to Chandragiri.

It was awesome experience to reach to a beautiful place such as Chandragiri. It had glamorous panoramic view of entire Kathmandu Valley and the entire Annapurna Range. It’s not everyday that we can see such view.

The view from hill was so stunning that with no doubt I can say why King Prithvi Narayan Shah fell in love to conquer entire valley.

The view from hill was so stunning that with no doubt i can say why King Prithvi Narayan Shah fell in love to conquer entire valley. The breeze of cool air was cooling us down. Moreover, the environment over Chandragiri and view of Kathmandu Valley under the bed of mountain range was cooling us down. Tiring off our legs and spending our energy and time for that panorama was such an achievement. To them lazy folks who couldn’t make it, all I can say is you missed it buddy! 😉 Furthermore, singing on top of our lungs, pinpointing famous places around valley, and most of all having good time with people you usually meet during your stressed packed up schedule made me realize what weekends are really made for. We had some snacks and drinks over there. Time was leaving us and we were compelled to go down hill. At Chandragiri Cable Car base station we still had more fun between the water fountain then we left for our home in Van after having dinner.

Now, reminiscing that good time to scribble down these words made me more closer to this family I have attached myself to. After-all, we might not know what’s inside each other’s head but we sure know that we each have our own Chandragiri top that we aspire to achieve one day. So, why not hike together laughing off the paining muscles and making moments and sure a lot of photographs together for days to come. Well, seems like I do need another hike trip with the family and I hope the quote makes sense now! 😉

I was really excited about the hike since Chandragiri hill is one of the best hiking trail around Kathmandu valley. It was a beautiful sunny day when we began our hike from Matatirtha. We started climbing uphill to Chhap Bhanjyang through the lush green forest where we saw many different kinds of birds, animals and floras with great herbal value for ayurveda.

Taking a break on the trail and singing a song, making fun, Roshan’s music system and boys’mimicking monkey sounds, were the main highlights of the hike.

Taking a break on the trail and singing a song, making fun, Roshan’s music system and boys’mimicking monkey sounds, were the main highlights of the hike.

After a few hours of walk, we took a break at a beautiful ancient village. My colleague started posing for photo-shoot. Chaps, the cameraman, was busy with clicking photos with his Honor 8 on impact mode. We had a tea break sitting at the top of the hill and viewing the greenery of the beautiful village. It was also the old cable car route which is dismantled now. Boosting up energy, we started our hike again through the steep up stone staircase. Again the major highlights was joke about Legend. The joke goes like this “Kid wear shorts, Men wear Trousers but Legends wear Jeans on hike”, In addition, “Kid wear Goldstar, Men wear Nike but Legend wear Fish Slipper”.

After one hour walk through the forest, we reached the peak of Chandragiri hill. The hill carries the great historical importance. During the time of unification Prithvi Narayan Shah used this hill as a fort.We were lucky to see the beautify mountain range of Mt. Manaslu, Mt. Ganesh and Mt. Langtang. Bhaleshwor mahadev temple is one of the major attraction of this hill. A large number of people from different parts of the country throng here to worship.After having lunch, we spent our time relaxing on the beautiful kid garden and also playing mobile game and making fun. There was a view tower at the top and from the telescope, we sawthe landscape of beautiful Kathmandu valley. After enjoying the site for few hours, we planned to get down. Since all the hikers were tired, after exploring Chandragiri we took cable car to get back down from where we were picked up by the office vehicle. Overall, it was the most memorable hike, that will forever be cherished by our hiking crew.

Everyone was excited for this hike because Chandragiri had become very famous form religious, entertainment and historical point of view.

Everyone was excited for this hike because Chandragiri had become very famous form religious, entertainment and historical point of view. We gathered at Deerwalk premises at 7 o’clock in morning and we left Deerwalk at 7:20. We also played basketball and drink tea between half hours of time.

Our vehicle stopped at Matatirtha at around 8:30. People who don’t have mothers are supposed to go and worship in this temple during the mother’s day. We had our breakfast there and spent some time there then started our hike to Chandragiri hill. Sunlight was so heavy that most of us felt a tough hike ever but as we kept on moving through the trails we were relaxed by the shades of woods and musical romance of birds. Following the woods we reached to Godamchaur and rested in a small village named Chappbhanjyag. We rested and took shed from abandoned Kathmandu – Hetauda ropeway, had a cup of tea. We spend a few moments there and snapped photos. We started off again to walk to our destination through the woods following the stone staircase. And finally after half hour walk we reached to Chandragiri.

It was breathtaking for everybody of us to be in heavenly place like Chandragiri. The entire Annapurna range was within our eyes and we were so excited to see such awesome view in front of our eyes. The entire valley was clearly seen. We felt like we were at the top of Kathmandu valley. We enjoyed there a lot by playing minimillitia, had some snacks and drinks over there. We had great time there. It was one of the most entertaining hike in Deerwalk for me. We moved down from Chandragiri in Cable Car. We still had more fun between the water fountains then we headed to Kathmandu.
We were so tired that nobody could imagine how we felt at that time. But no matter how much we walked, we all were happy that we finished our journey in time with pleasure and difficulty as well. After having launch we headed to Kathmandu in micro. Everybody was tired and some of us slept for moments and after having dinner we returned to home. It was a very good and memorable hike. Thank you Umesh dai who lead us a safe drive.

7 thoughts on “Up Trails to Chandragiri”