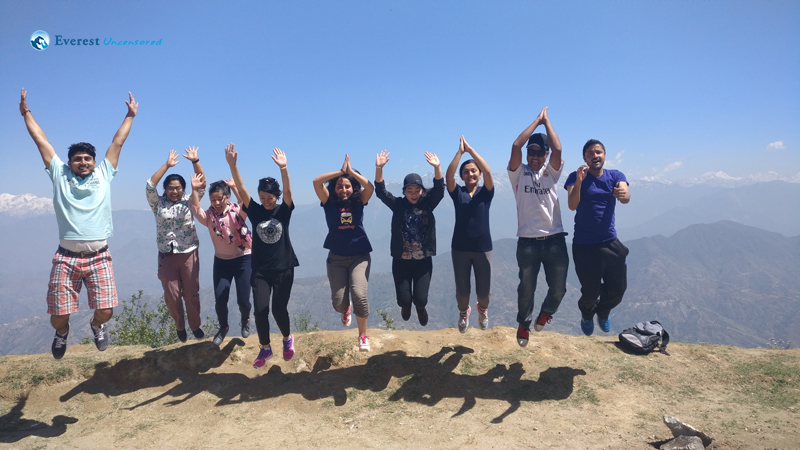 The day of the hike was very beautiful and sunny. The sky was very clear. I woke up at 6:30 with great enthusiasm as it was my first hike from Deerwalk. To be honest, I actually woke up several times during the night thinking it was morning already. Now, this shows how excited I was for the hike.

I got ready and reached office sharp at 7:30. Then, we collected water for the hike. As pre-informed, the office vehicle left sharp at 7:30 picking up rest of the hike members. At 8:30 we stopped at Tokha for breakfast. We had some tea, omelets and pakauda. We also bought bananas for the hike. After a few clicks, we moved ahead.

We started our hike from Jagat bus park. Everyone seemed so excited and full of energy. We walked through the forest enjoying beautiful views and cool breeze. I was totally mesmerized by Nepal’s beauty, away from all the hustle and bustle of Kathmandu city. Every member seemed so happy and stress-free. As we moved forward, the view of snowcapped mountains, greenery and rhododendrons captured our hearts! We could not get enough of nature’s beauty! After 2 hours of hike, we finally reached Surya Chaur. So Surya Chaur is basically an open ground surrounded by the everlasting beauty of greenery and mountains with mini hotels around. The weather at Surya Chaur was really cool and fresh, no pollution at all. All of rested for a while, appreciating the beauty around us. Then we had a great tasty lunch at one of the mini hotels there. After that, we started taking a lot of photographs. We also tried the Namaste jump which was really fun to do. There was a tower at Surya Chaur and I was really excited to climb.

With all my courage gathered up, I started climbing the tower. I was quite determined to reach the top and I did it.

With all my courage gathered up, I started climbing the tower. I was quite determined to reach the top and I did it. I enjoyed a great view! After getting down, all of us gathered and started chitchats. We introduced ourselves to the camera and shared our experience during the massive earthquake. After some time, we left Surya Chaur. After an hour or so, we reached Jagat bus park where our vehicle was parked. We stopped at Jhor in hope of getting to see the jharana, but because of dry season, there was no waterfall. However, we visited the cave. Then, our hike to way back started. Now, by this time, I was kind of exhausted. Then, we headed towards our respective destinations.

Well, this was all about our one day hike to Surya Chaur. We sure had a lot of fun and made good memories. I had a good sleep that night.

This was my first hiking and I was very excited. It was a clear sunny day full of excitement, the journey begins from the office premises. I picked up the bus from baneshwor. All my friends and my brothers and sisters picked the bus from their respective stations. When everyone was on the bus then the fun began. We all started singing songs, we were laughing, talking and were having fun. And then we reached to Tokha nearly at 8:30 am and then get out of the bus to have breakfast. We had a delicious, tasty “pakauda, omelet and tea” where we clicked some photos as well.

Then after having the snacks, we move ahead in the bus. As we move ahead the road was not that good but still, we were having fun in that. As we were moving we could see the forest and the big green hills and seeing that beautiful scene, everyone felt ecstasy. Then we reached near the army camp at 9 am from where we started walking. Everybody picked up a bottle of water in their hand and then the journey began. We were walking through the forest where we could see lots of “Laliguras” our national flower. As we were moving ahead we could see the clear white mountains around us. We keep on walking talking with each others taking some photos. And then finally reached our destination Surya Chaur after walking for 2 hours.

We could see the amazing view from there. I could see a huge smile on everyone faces seeing beautiful mountains.

We could see the amazing view from there. I could see a huge smile on everyone faces seeing beautiful mountains. Though everyone was tired but after seeing those mountains everyone just forgot their tiredness and started taking photos.There was a big tower and some of my friends, brother and sister started climbing that tower. It was like impossible for me to get at the top of the tower but yeah my friends reached the top of the tower which was never ever possible for me. After taking photos and climbing tower we had an intro session.

We everyone were hungry then nearly at 12 pm, we started having our lunch. The lunch was so tasty. After having our lunch we took some rest and then we decided to return at 1 pm. We again started walking through the jungle. Again after walking for 2 hours we reached army camp where was our bus waiting. We went to Jhor as well while we were returning. Though there was no waterfall but we went to the cave. It was really so fun walking in the dark cave. Then we returned to the bus and everyone started getting out at their respective stations. Finally, the happy trip ended amazingly.