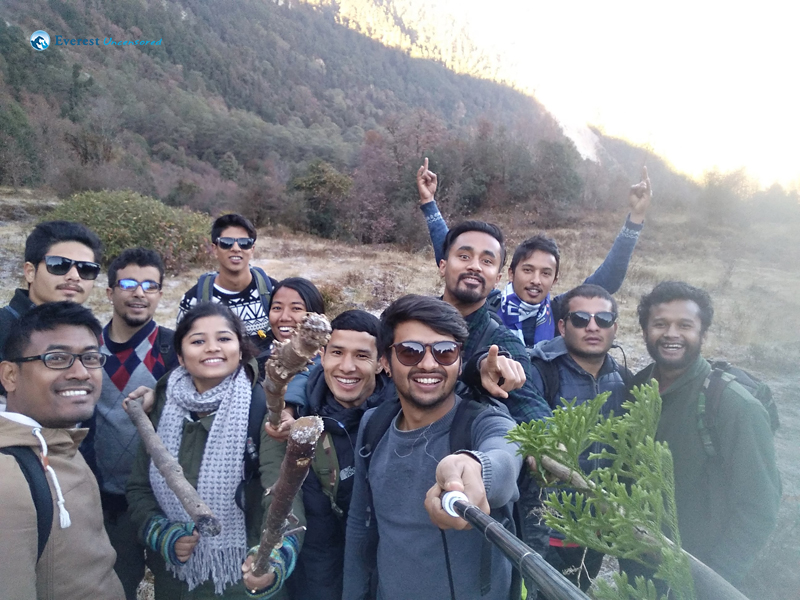 Mukesh K. Jha
I am very fond of hiking and hike announcement to HELAMBU was a dream comes true. The first list of announcements were made but I could not find my name in the list and I felt like my dreams were shattered.

So I persevered to chase my dream rather than let it go. I only knew one thing I WAS GOING TO HELAMBU !.

When you have strong desire nothing remains so difficult, my name was announced in final list of hikers. It was scheduled to be on 10th to 11th of December 2016. I was super happy!

I woke up at around 5AM, very excited, completed my daily routine and took off from home to office as I was joining rest of members at office. Starting moment of my trip, it was a bang it started with Padma and my Carom game and guess what, I lost by 3-0 and this is how my trip was kick-off. After 20-30 minutes we were out of office premises as our designated tour guide Umesh Dai reached after refilling fuel in our vehicle. At around 7:30 we all left from Koteshwor for our destination. We were all set with itinerary in our hands showing all the details of our hike, after a while then there was a short stoppage near Banepa. This was the time when Niroj was all energized and his vocal was all around our mind, fresh air and the songs were really mesmerizing. We stopped for breakfast at a motel in KeraGhari. We had some snacks at Keraghari and after we had breakfast we started to resume our journey. The gravel road, rainfall followed with fog made road visibility challenging and sharp twist and turn of roads was very adventurous.

At around 1 PM we reached Melamchi, Sindhupalchok and had sumptuous lunch. We had decorated Nepali meal with curries of our choice and to make the experience better the weather was getting chillier. We stopped at Timbu,Helambu for about an hour and again started our journey. On the way we had some short period of rest and took photos. And at around 5pm we finally reached Shermathang. The tiredness and pain in body was all lost when we first stepped in to Shermathang. After we reached there we went to room which were specified for us and agreed to meet after half an hour in restaurant which was on ground floor. We had tea, some snacks and started playing cards. After a while some of us went to visit local market and it was awesome. All the hills were covered by Fog as it was cold. When we reached at hotel rest of our friends were busy playing cards it was really a fun moment.

On the next day we woke up early in the morning, freshened up and moved for the hike at around 7.00 am. We finally reached our destination, “Tarke ghyang” after four hours of continuous hike, there we had yak milk Tea and breakfast. While returning by we had some hindrance like leeches and slippery track some of us were skated by muddy track, but nothing that we couldn’t handle. The view of mountain was amazing and the mountain range view was so heart touching and gave peace to our mind and soul peaceful.

At around 6PM we stopped by at a small shop in Melamchi to have tea and take some rest and be fresh.

Umesh dai being the awesome pilot as he is, drove us back to Kathmandu in just about an hour.

Our short yet sweet trip to Shermathang was full of laughter, fun, team work, friendship, nature and amazing memories; I can’t wait to explore other places of Nepal. Thanks, Deerwalk for giving us this opportunity, CAC team for organizing this hike and Padma for outstanding management.

Niroj ThapaWalking in the trail of Woods
Finally our team manage to take a long walk to enjoy with the naturalness of our countryside. Following the trails of wood took a walk in the woods and came out taller than the trees.

Everybody in the team were informed to be at Deerwalk premises within 6:20 in the Saturday morning and most of does as informed. We had a delicious cup of tea nearby the shop and headed towards our journey around 7:00. The range of Himalayas was clearly seen early in the morning. So we decided to stop nearby Zero kilo where we have a breakfast with the beauty of Himalayas. We all took some pictures there. So without wasting more time we again head towards our destination. We were 14 members in the micro but enjoyed a lot and a lot. Laughing at the jokes and enjoying with the songs inside the micro we reached to Melamchi where we had a tasty launch and bought some dry foods for hiking,meanwhile we had mannequin challenge.. After spending some time there we again enjoyed the time inside the micro with jokes and songs and finally reached to “Timbu” around 2:30 and all the hikers were ready to Hike with in the trails of woods.

We distributed the dry foods, waters among the hikers and started the journey.

At first the sun was so hot that we all felt tired within few minutes of walk.

But as we kept on moving ,sun also started slowly moving to the dawn. Then the environment also provides us the energy to walk and we kept on. Some fellow hikers were so energetic, I think they never stopped at any place even to rest. But myself and few elders tried to take shortcut through the deeper inside the woods,meanwhile we were stucked inside the woods. We build our own way to be outside the woods and enjoyed the taste of traveling more inside the woods with energetic and peaceful environment. Some of our energetic hikers reached to “Sermathang” around 6 in the evening but we kept on moving slowly watching each and every view of beautiful village and sunset. We all were at “hotel name” around 7. it was too cold outside so we all had a cup of tea and around 8 we had a delicious meal. After meal we all gathered for campfire where we enjoyed a lot and a lot singing ,dancing,funny talks and so on.

Having breakfast in the morning at 7 we headed to next destination “Tarke ghyang”. It was too cold in the morning and road was narrow and slippery as well. We were talking an laughing and singing as well. Some hikers slips in the way and they added more laughing environment in the group,walkiing inside deep forest early in the morning with the sound of birds we walked around 4 hours and reached to “Tarke ghyang” where we had a noodles soup,tea and cookies as well. Some us slept in the sun in the ground. We took some photographs there and again we headed towards the “Timbu”. We kept on walking and walking and reached there around 2pm and had a lunch there.

We were so tired that nobody could imagine how felt a that time. But no matte how much we walked or how much we were tired we all were happy that we finished our plan in time with pleasure and difficulty as well. After having launch we headed to Kathmandu in micro. Every body was tired and some of us slept for moments and some slept for hours.we reached at office at “time”.

I was vey good and memorable Hike. Thank you Umesh dai who lead us a safe drive and Thank you DWIT ……

107 thoughts on “Timbu to Tarke Gyang”