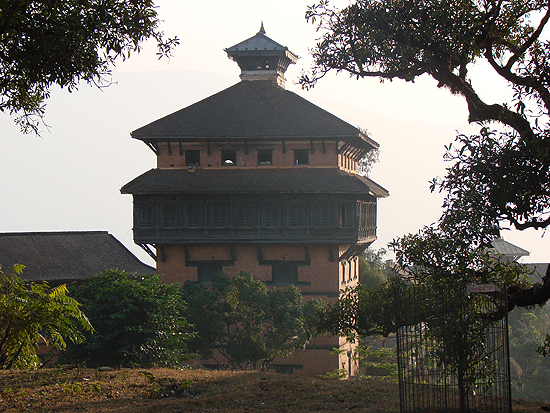 It was a typical Poush morning of perhaps twelve to fifteen years back. Long before the residents of Kathmandu had seen any visible effects of the global warming. Thick mist blanketed the valley with mercury dipping towards lower tens. I got out of slumber at quarter past five in the morning. The electricity was out due to the weekly load shedding. After a quick cold shower, I was at the breakfast table. Quarter to six in the morning, locally made cereal in warm milk and a candle lit dimly. After a hiatus of six weeks, it was going to be my first hike of the year. I wanted it to be very special to celebrate the beginning of the New Year. Vishnu had emailed that this day’s hiking was in the Northern Region without stating origin and destination. The plan was to drive towards Kakani and to pick a trail on the road. Now when I think of it, it was this act of surrendering that gave the day its character.

The Toyota van carrying ten eager hikers ascended Balaju pass leaving the congestion behind. Few were lost in the dense fog that seemed to engulf everything around. Most were busy talking about this thing or that to each other. One was reading the latest Nepal magazine that ran the cover story of how Kathmandu was changing its skin with the times. Some pined for breakfast but kept the thought private. Strangely enough, nobody seemed to care where they were heading to. Osho Tapoban at Mudkhu came and went. Panchmane came and went. Finally, near Khani Gaun the troupe stopped for breakfast consisting of omelet, chickpea curry and tea. It was a refreshing stop for about thirty minutes and the journey commenced soon thereafter.

It was only after we drove past Ranipauwa that fellow hikers started to inquire when the van would stop and the hiking start. In between few interesting milestones, subtle jokes of Manindra lifted the air and the spectacular view of Ganesh himal evoked a collective awe. I proposed that we hike from Devighat to Trishuli. This region was yet unexplored and would open up numerous future routes. There was an instant loud thud of approval (including Vishnu). It was very exciting at that moment to have the team share the same sense of adventure. I was surprised at the same time as well. An hour went by and agitation set in seeing that Devighat was still some thirty odd kilometers away. All of us opined that the drive was getting tiresome. Then suddenly Vishnu told Manoj to stop the van near a school he had spotted.

Shree Pancha Kanya Secondary School was bustling with activity. It had a big red welcome sign posted at the entrance indicating an event of some sort was to take place during the day. Students in blue uniform littered the turn of the highway at Tigaun. We got hold of the head teachers and informed them of our intention to donate few copies, pencils, erasers and sharpeners to students. With expedited eagerness, a couple of teaching staffs organized elementary school children in a classroom. Once the students were properly, seated, fellow hikers distributed the aforementioned items to each student. I am sure to all who took part it was a very satisfying moment. After this service was over, all the hikers gathered outside the school, and, began asking the locals how far the trek to Trishuli was.

One Subba Silwal of Tigaun to whom the question was asked, thought for a moment with a cunning glance and told us to follow him. He said that he was going to his house and would show us the direction to Trishuli. He spoke with such assurance and conviction that none of us had any doubt whatsoever. He wore daura suruwal and a Nepali topi. Spoke as if he had been there and done all that and was quite vociferous in a pleasant manner. Contrary to typical personality of such type, he spoke more of his details than to ask of us. One conversational stream led to another and he mentioned that his budo-mamaghar was Kanakot and that he knows most of the Pandey’s in that area. He shocked poor Kamal by asking “Govinda le kukhura paleko thiyo, ke bhayo thaha cha?” Along the way, he would entertain with comments like “office le hindna ko lagi kati talab dincha?”

“Aba mero ghar yehi ho,” said he and entered a rather big village house showing his khetbari around. He then invited all of us for a sumptuous brunch. We thanked for his hospitality and told him of our intention to get moving. Although the fresh cauliflower and rayo ko saag in the garden looked too pleasing to pass by. Then he told us to take a trail that would take us straight to bel chaur. The trail ran through the countryside and was quite pleasant to say the least. Eventually though it sloped, down and led us to the gently flowing Belkot khola. By now, the altitude had really dropped as we could feel the difference because of the warmth in the air. The team gathered for a group photo at the river and met Krishna Bahadur Pudasaini with two young children. He pointed to the general direction that we should be heading to get to our destination.

This section of the trail can be characterized in the following manner. Miles and miles of potato harvest through which the trail ran, Belkot khola to our right and young healthy sal trees sprouting tall out of red soil across the river on the other side. I am afraid the picture of droplets of dew and mist being evaporated by the warm Sun against the aforementioned backdrop cannot be painted by words. It is better experienced and felt. At about one third in this trail, we met Krishna Bahadur Tamang of Madanpur working a watermill. This wonderful trail ended at the confluence of Belkot khola and the larger Tadi khola. The confluence was a very picturesque spot and some of the hikers donned their birth suit and took a dip in the river for a quick swim. All of us relaxed and contributed to a potluck meal of Yak cheese, biscuits, oranges, bread sticks and sundry.

The potluck over, the team crossed the suspension bridge over Tadi khola to start the climb through a very steep hillock. The hill was replete with young sal trees and the soil deep red. After a tortuous (well in the context of this hiking anyways) climb of perhaps thirty odd minutes, the hikers were shocked to find that they have actually climbed up to a land that is best described as some sort of plateau. It stretched out flat as far as the eyes could see in front and side of them. There was farming done, cows and other domesticated farm animals that were grazing and a large number of brick houses as well. There was an irrigation canal that seemed to have long dried out. An energetic teenager that we met on the way, Shyam Sundar Nepali volunteered to provide us the history of this flat piece of land. Apparently this entire stretch of land, called Majhitar, was handed as a birta by king Prithivi Narayan Shah to the fishermen who helped his army cross the Trishuli and Tadi rivers during the former’s conquest for Nuwakot. Shyam also pointed us to the historical Belkot fort, to the south of Majhitar, where we vowed to hike someday.

The trail through Majhitar eventually merged with the highway at Gangate. With lethargic legs, the hikers walked the remaining four kilometers to the destination Trishuli bazaar. At Trishuli, the team rested for a while before deciding to drive to the historical Nuwakot (palace). The seven-storied palace building, the recreational building, Taleju temple and the courtyard are living examples of traditional Nepalese architecture. It was evident that much more effort is needed to maintain and preserve such historical sites.

After all sightseeing, some hikers exchanged pleasantries over tea and biscuits whereas others opted for the tried and tested fermented magic. On the way back to Kathmandu dinner stop was at a Zen style restaurant near Ranipouwa with its own fish farm. It was a very fitting end to a glorious winter’s day – two groups of hikers sitting around a big fire – listening to the soothing sound of a waterfall – and enjoying the best fish that this side of the valley has to offer – Rainbow Trout.

Distributing the Copy and Pencil to the Student

Copy and Pencil made student happy

That’s all boys and girls for today

Vishnu in lead and baba follows

Oh!!! He is in Meditation

I did my part

Happy time for every one

Hikeing team all in one place

Swimmer Nipun in the middle of Tadi

Baba with enlighten in the middle of Tadi

No Copy No Pencil but enjoying with Fishing Net

Slowly down the gangas

Another stunt of the Stylish Man

Man with the Camera

Every Night in my Dreams…

BhaskarB One of the Camera Man

Aunty from the Excursion

another form of the trail

On the way to Nuwakot Palace

The palace has seven floor

Window of the Palace

And the Door of the Palace

In front of 260 years old palace

What you call it?

Script from the back time

Inner part of the Palace

Another Look of the Palace

we been on this trail

Other part of the Indra Chowk

Brief explanation of palace in Nepali

Good bye to sun for the day

0 thoughts on “Hiking from Tigaun to Trisuli Bazaar via Majhitar”