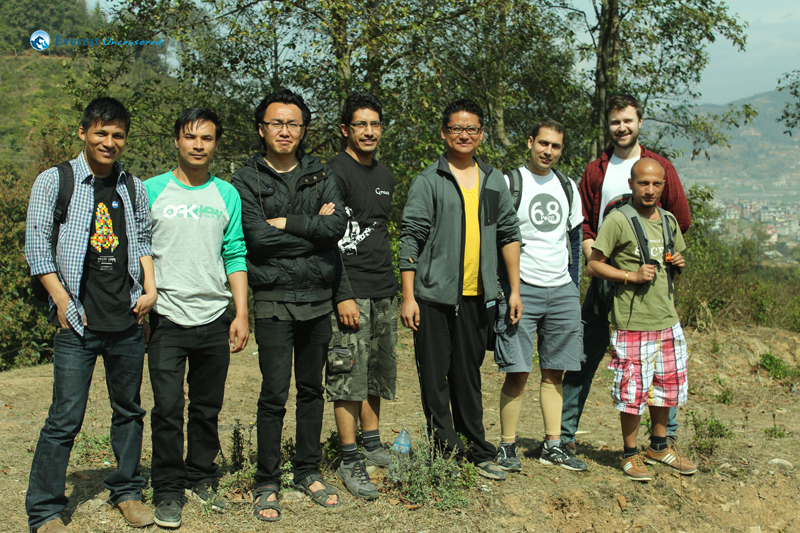 Deerghayu Shrestha
Though it was Friday the 13th I felt very lucky. Although I don’t believe in luck, I aver that I relish uncertainty in life and so that day I happened to return home in the van with Pramod Dai. Pramod Dai invited me to be part of weekend hiking team destined for Chitlang and it was an absolutely unexpected and unbelievable opportunity for me. I had nothing to think about and taking time to decide. “Count me in Dai”, I replied in no time.

unfortunately, overconfidence drove us to a wrong route at the very beginning

Saturday morning, I joined the team at Shahid Gate at 9:30 AM along with Edward AKA “Mr. TIKARAM”. We were a team of nine and headed towards Thankot, from where our excursion was supposed to be begun. We’d got veteran hikers too who had already been to Chitlang but unfortunately, overconfidence drove us to a wrong route at the very beginning. After few hundred meters of driving we reached Godamchaur where we found a Khaja-Ghar (restaurant) to appease our hunger and re-energize ourselves physically and spiritually. We also found time to play some cards. After this short breakfast break we embarked on our grand mission of conquering a sheer mountain (named Chandragiri). We walked on, looking over the Kathmandu valley, initially passing houses and shops where people were just stirring awake to the demands of the day and getting to their chores. Our route veered sometimes left and sometimes right leaving the natural trail.We were soon in the foothills of Chandragiri, and as we pushed up the incline, I looked back and realized we had most definitely left Kathmandu behind-there it was, little more than a sprawling congregation of concrete from this vantage point, faraway and, for once, silent. As we climed higher, the weather turned out to be fantastic; neither too sunny nor too cloudy. We took a number of pauses on the trail. The best part was when we came across a big flat meadow in the middle of a dense forest where all of us layed down and some of us even dozed off for a while. We spent around an hour at that place playing poker, playing guitar and singing.

I remember, we were so hungry that WaiWai was our only lunch and that was just fine. This hike in particular was much more arduous than I had imagined but the spirit of our team was commendable. Not to forget, the constant humor that accompanied us; someone amongst us was always cracking jokes, making fun of others and especially of Edward or passing a wicked sarcasm. We were enjoying the beautiful landscapes and nature at its best while Mani Dai was busy capturing that scenery with his camera. We were on top of the Chandragiri after a few hours stumbling upon choppy trails. At the same time a few team members including Edward joyrode a tipper to reach on top. We found ourselves in an utterly new environment where we didn’t have to worry about crowds, frustrating horns or carbon monoxide. We caught the first sight of Chitlang from the top waiting to greet us and we could construe a panorama of it although we were at quite a distance. We were anxious to get there ASAP. As we resumed our hike and started to descend the mountain, we immediately took a brisk break beside the road for playing flush while a truck passed over us spreading dust all around us and compelling us to resume hike again. We came across many locals as we threaded through the jungle, villagers on their way to fetch fodder or those on their way back down the hill.

As we came nearer to Chitlang, we witnessed small houses made of stone with slanted roofs making up the entire village. It was around 5 PM when we entered a Newari Khaja-Ghar for some snacks. We had sukuti, chiura, anda, chhyang and had a wonderful moment singing together the song “Malai nasodha…” We were supposed to stay at Narayanhiti Homestay, however, we came upon another one that looked promising-the Goat Cheese Homestay-and headed there instead. We had a campfire, with jamming and refreshments outside while relaxing ourselves. For dinner, local cuisine was served to us, and maybe due to our tiredness the cuisines and delicacies provided were ambrosial. Till 12 AM we all enjoyed playing poker and flush and after that we all set off to sleep.

The next morning the hospitable owner of the homestay bid us farewell with a garlands and a dab of red tika on our foreheads and it was something worth remembering. Our destination for that day was Markhu which was a one and a half hour walk from Chitlang. After a heavy breakfast, we gathered our stamina and once again started our excursion. The journey from Chitlang to Markhu was the most memorable experience of this trip for me, partly because of the amazing weather and the beautiful walking trails which took us deep into the pine forest but mostly because of our destination. We could hear the sound of a river gushing beneath the hill. To our surprise, we encountered the breathtaking view of INDRASAROBAR and found ourselves at Markhu. It is the first and the largest man-made lake prepared for the Kulekhani Hydro Project. The ambience at Markhu was pleasing, relaxing and very peaceful.

Unfortunately we did not have much time left for boating, another must-do thing in that place. For lunch, we had the typical daal-bhaat-tarkari but the fish curry was something to die for–so scrumptious. After the lunch we left Markhu at 2 PM and took our van for the way back. Though we were so desperate to listen to soothing music we didn’t get any option other than tuning into Radio Nepal. It took around two and half an hours to get back to Kathmandu. I had the distinct sensation right then of being unfettered; we’d left our lives far behind, trudged our way to a place where each turn would bring something new and unseen. There was a feeling of accomplishment in the air, and of possibility. For me, in sum, it was an unplanned yet an amazing trip with wonderful people.

2 thoughts on “Hiking from Thankot to Kulekhani”