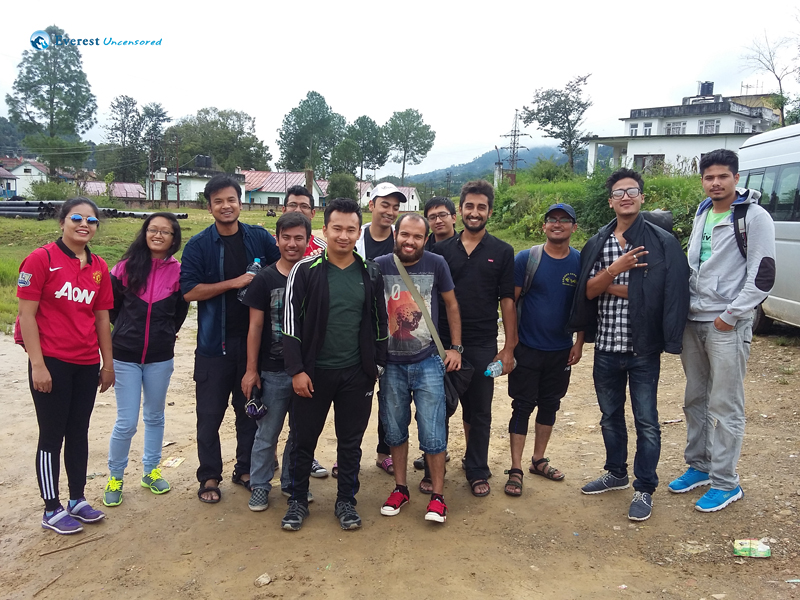 As weather was cats and dogs that day, it delayed some hikers (including me) from early morning start. Due to the heavy rain, some colleague had to change the entire clothes and some had to dry their clothes in hand drier. Then, we left Deerwalk office premises at around 8:00 am. We picked up all the hikers on the way to Khopasi. All hikers were excited from very beginning; cracking jokes on the way made office vehicle full of laughter.

“आँखा झिमिक्क्! माल गायब्!” dialogue from Rajesh dai was one of the most used dialogue from beginning of hike as Rajesh dai lost his “Imported” umbrella early morning in no time from office premises and the dialogue was used over and over for different purposes.

“आँखा झिमिक्क्!” माल गायब्! dialogue from Rajesh dai was one of the most used dialogue from beginning of hike as Rajesh dai lost his “Imported” umbrella early morning in no time from office premises and the dialogue was used over and over for different purposes.

We reached Banepa at 9:30 AM and had our breakfast. Jokes by Umesh dai was adding extra flavor to our breakfast. After around 30 minutes of ride from there, we reached Panauti bazaar and next stop was Khopasi. In Khopasi, there stood one of the first hydroelectricity plants of Nepal. We took our bags, water bottles and started our hike from Khopasi. Balthali Village is a small sleepy settlement which rests at the junction of Roshi and Ladku khola river. Due to muddy and slippery road, our hike was getting challenging for all. Prakrit’s weather forecast came true, as the weather was getting clearer as we were hiking to Balthali eco hill resort. During the hike we came across many suspension bridges, rivers and mesmerizing view of green hills dotted with small huts where tons of pictures were clicked. Most were busy with their clicking machines and some were enjoying the ethnic tribes and natural beauty. Everybody was astonished by the splendid view of mountain and valley, beauty of luxuriant floras and freshness of the area.

After walking for about an hour we reached to our destination, Balthali Eco Hill Resort at 11:00 AM. Refreshing drink were served as we entered the resort. The resort is thickly forested with luxuriant floras and Sal trees. The trees cover the hill that undulates and opens out to terrace fields. We can enjoy the breathtaking view of snowy peaks of Dorjee Lhakpa Langtang and whole range of mountains(if weather is clear). The lunch garnished with organic vegetables, were very delicious. After having lunch we enjoyed the appealing views of landscapes, hills and mountains. It started to rain in Balthali so everybody decided to return to Khopasi, as road will be more slippery and muddy. I have brought home made liquor(अयला) which was tasted by almost all colleagues. It really helped to forget all tiredness.

Though it was short hike, we enjoyed mesmerizing view of hills, landscapes, rivers and the nature and company of awesome colleagues made a perfect hike.

I woke up late and felt that it was already late for the hike. I was taking the longest steps I could possibly take to reach the office on time. But I was amazed to see only two members in the office. We start contacting other hikers so that hike could begin on time. We left office at about 7:30 AM and picked up remaining team members on the way.

We encountered some interesting incident before starting our journey. Center of attraction was our own Rajesh Dai (Chata Harayako Manchaya). We faced damp weather from early morning, some ideas were there to go somewhere else watch movies have lunch and end our program, but we didnot lost our hope and at last weather was also with us.

We had our breakfast in a local shop in Banepa and we headed toward Panauti after a drive of around 30 Minute from Banepa we reached Panauti. After reaching Khopasi, we start our hike around 9:30 AM. For the first 15 minutes of the hike, we hiked through the main road, which was not what I was expecting. Huge lorry tracks drove past us pushing us towards the edges of the muddy road. After walking for the half-hour, we finally took an off-course up into the bridge.

When we reached at the destination we were welcomed with cold and refreshing juice. Then we rested for some minute as we were so tired. Then we had lunch around 12:00. Hospitality of the resort was very good. After having lunch then we had a site seeing of the mountain. Then we had some delicious tea and we chitchat about our hike. After some time we left the resort and headed towards the Khopasi.

One of my friend (Mero-Bhaktya) got lost in the way but he managed to find the way with the help of the villagers.

One of my friend (Mero-Bhaktya) got lost in the way but he managed to find the way with the help of the villagers. We took many photos while heading towards Khopasi. The main attraction of our Hike was suspension bridge. We had passed three suspension bridge during our hike.

We reached khopasi around (3:00 PM) then we headed back to kathmandu. Everybody in the van was so tired that even some of them had a great sleep in the van. Then we had a drinks break in the beautiful place called Sanga. And then we arrived at the office premises around 5:30 PM.