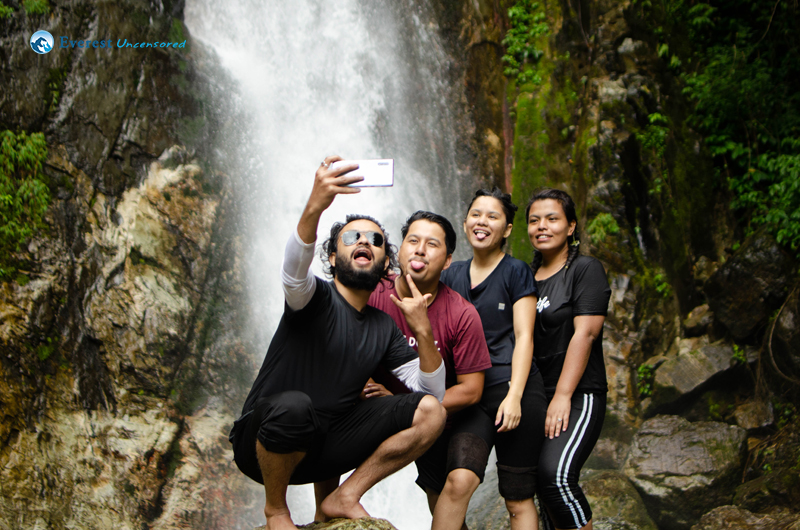 On 22nd September, Hiking Club organized one day hike to Simba falls. There were total of 15 participants from different batches and were asked to gather at Deerwalk Complex at 5:45am.

The bus headed to our destination at 6:15 am.We had our breakfast at Lele Bus Park. There was this beautiful temple nearby,called Tineshwor Mahadev :where the only Saraswati Kunda in Nepal was located.The local people there told us a really unique fact: it is believed that by having the water from the Kunda,the mute person will start speaking.The bus ride was literally 4 hours  long with great views and chillier weather till we reached our next
destination,Manikhel.

Then, our hike began.Due to monsoon season,the roads were little slippery and difficult. We got to see and have the local cucumbers “kakro” which was surely our energy boosters.We hiked for about 2-3 hrs.It could have took us long than that if we had lost our way to our destination but thanks to our brothers who came there to guide us.Though,the hike was short but surely it was more challenging and difficult. Finally, we reached Simba falls by falling, helping each other and mostly enjoying the promising and beautiful views.Everything was worth it including the difficult roads.We enjoyed,we swam,played. And obviously,we clicked photos,a lot indeed.

Then, we had our lunch at Manikhel and at about 4 p.m., we got in our bus and headed back to Deerwalk premises.We reached there at 7:30 pm.

Hiking is not only about long walks. Its about the adventure,fun,happiness,friendship and memories to cherish for life.

Fun fact: There are step by step 7 waterfalls.The water fall, being very cold, is called “Simba” in Tamang language.

On the 22 nd of September, hiking club successfully organized a wonderful trip to the luscious wilderness of Manikhel. A total of 15 members assembled on DWIT grounds to get ready for the thrilling yet adventurous journey that lied ahead.

The gang left the grounds at around 6:00 and enjoying each and every moment, reached lele at around 7:30-ish where we enjoyed a wholesome breakfast. Not gonna lie, starting the day with a cup of tea was actually one of the best parts of the trip for me.

Fun fact about lele: It consists of temple called Tileshwor Mahadev. And legends has it that if a deaf and dump person drinks water out of the “Saraswati Kunda”, he/she will start speaking. I don’t believe in legends but just the thought of it, made the trip a lot more enjoyable.

As if the bus wasn’t jaunty and upbeat enough, after breakfast it reached a whole new level. Everybody was energized and that energy could be seen in the faces of the people when we started playing cards. It was a rather painful experience actually. You see money wasn’t the actual bet, it was pain. A little hard to get around with just words, just try to think of it as a punishment the loser would have to face.

After a heated bus ride filled with games, jokes and a lot of songs, we finally reached the place from where we’d begin the hike, Gotikhel. We did meet two familiar faces from DWIT there, without the help of whom we’d never have reached the waterfall. And, there was one other member that joined us and stayed with us for most of the hike. He wasn’t one of us and neither did he understand us. Yet he was with us for a very long time without any expectations.

From Gotikhel our next destination was manikhel where the mighty Simba falls lied. So, we got moving at around 10:00 and in the beginning the hike seemed like a piece of cake. Little did we know that it was the calm before a storm. I still have a really clear view of the way. There was a suspension bridge that separated the wilderness from the village.

“On and on they flew, over the countryside parceled out in patches of green and brown, over roads and rivers winding through the landscapes like strips of matte and glossy ribbon.” – J.K Rowling

This quote perfectly explains my emotions when I saw the other side. A stream of river that presented the way into the jungle was absolutely mesmerizing. We followed through and it led us to the jungles that would present us the way to the captivating sounds of Simba Falls.

This is when we started feeling the impact of the fore-mentioned storm. In order to capture the essence of Simba Falls, we first had to conquer the steep, narrow and uphill mountains of Manikhel. The first phase was climbing up a sloped hill. It was difficult but we pushed through. After finishing the first phase, we were rewarded with fresh cucumbers which was definitely refreshing.

After a quick break, we moved on to the second phase. The second phase constituted of a bit narrowed and sloppier road. It had rained the day before. So, some places were still wet and slippery. But it didn’t compare at all to the third phase.

The third phase comprised of the narrowest and steepest road that I’ve ever been in. I hate to admit it but I almost slipped three times. It was embarrassing but at the same time it was pushing me past my limits. I held on to my ground and I struggled to complete the third phase. Embracing the sweats and fatigue in my body, I finally conquered the mountains. And do you know what I saw after?

I saw a white angel that was ready to embrace me with its arms wide open. I had finally reached Simba Falls. I didn’t actually go into the water but just being around it with 14 other people gave this hike a meaning. I finally got to listen the song the waterfall had been singing. It was the symphony of nature.

So, everybody else got into the water, clicked photos enjoyed a lot. And then it was time to say goodbye to the waterfall. Slowly and steadily we retraced the path back to the river bank where we had an amazing meal waiting for us. After a long and tiring journey, the meal was certainly out of this world.

On the way back, some of us were even more energized than before. Laughter and joy had filled the air around us. Unfortunately, the day had to come to an end. The trip ended when we stepped foot in DWIT premises at around 8pm.

Overall this hike was really productive in the sense that it was able to divert my attention from the clutches of my phone and I’m really glad that I was a part of this experience.