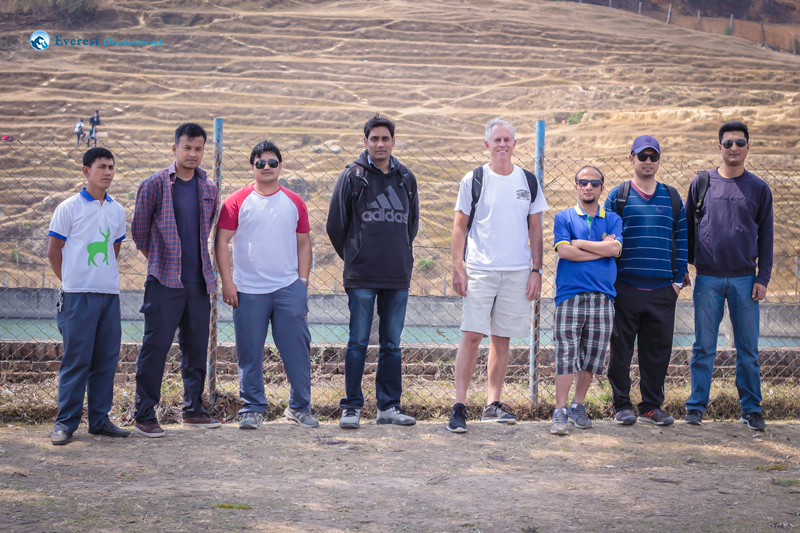 Bipul Shrestha
It’s always pleasant to escape from the daily routine of work and social obligations. It had been quite a long time since I had any leisure time to enjoy with office work during the weekdays and my college during the weekends. An invitation from Kapil dai came as a pleasant surprise to me, to which I immediately responded with an emphatic YES. I had no idea where the hike was planned and how long it be, but I was sure that it would be a fun one.

The day of the hike started out with Abhinayak, Aseem dai, and me meeting up at the office premises at Deerwalk right before 10 AM. The others were scheduled to be picked up en-route. The destination was reservoir for Pharping Hydropower station.

The Pharping Hydro Power Project is the first hydro-power project of Nepal and second in Asia situated in the outskirts of Kathmandu. In 2010 it was declared a Living Museum by government of Nepal and was open for public.

The Pharping Hydro Power Project is the first hydro-power project of Nepal and second in Asia situated in the outskirts of Kathmandu. In 2010 it was declared a Living Museum by government of Nepal and was open for public.

We started off to our destination as per schedule. Randhir joined us from Gyaneswor, then we went to Annapurna Hotel to pick up Jeff. Then we picked up Kanchan dai, Kapil dai and Ashish dai at Kalanki. Jeff had just landed the night before and had just a couple hours of sleep at most. But that was not going to stop him from making this hike. Everybody settled down for trip. We stopped at Taudaha, a small lake in the outskirts of Kathmandu. The name comes from a combination of Newari words ‘Ta’, meaning snake and ‘Daha’, meaning lake. The lake used to be full to the brim, teeming with fishes of all sorts but due to construction work in the area, some portion of the water had been syphoned out, though it was still very beautiful. Kapil dai and few members of the groups went ahead to talk to a local restaurant to ensure that we would have a place to stay and eat after we returned from our hike.

We then started our hike to the reservoir. The sun was out, but it wasn’t too hot, the early spring weather was welcoming and perfect for a hike. The first memorable incident of the day came when Ashish dai recommended a route as he had been to the reservoir before. Everyone followed him, but to everyone’s surprise, the path ended at someone’s house. We backtracked to the point where we took a wrong turn. We could see the reservoir from a far, we planned a proper path and set on our way again. After walking for an hour or so we reached the final stretch to our destination. Come to think of it, the other path we took might not have been the actual hike trail either, as it took us through farms, crop fields and peoples’ houses. We reached the reservoir. It was a grand sight to behold. The reservoir was perched on top of a small hill unobstructed and open an all sides. The wind was so strong and took us by surprise as the path we took to reach it was so calm in comparison. In fact, the wind was so strong that it might have dried off all our sweat from the hike. The reservoir was surrounded by small benches where people could relax and appreciate the view of the valley below. We stayed there for about half an hour, drinking water, taking pictures and enjoying the fresh air and the view before heading back to Taudaha.

We settled in a small hut in a local restaurant at Taudaha, which we had talked to before leaving for our hike. Everyone decided to play some cards during the time. We ordered food and drinks and played cards. I had brought a wireless speaker, and since I didn’t know how to play poker, I was assigned the role of DJ of sorts. I particularly remember choosing classic songs from Led Zeppelin, Creedence Clearwater, The Beatles and the like that everybody enjoyed particularly Jeff. An amazing thing about music is it takes you back to a time when you first heard the song. For Jeff, the songs reminded him of his older days in school, college and his family. The stay was made even more fun when Jeff and Kapil dai started giving insights into a happy married life. It was a wonderful time spent with wonderful people.

We headed back to Kathmandu at around 5 in the evening. On the way back, we talked some more, Jeff shared his experiences on how he has visited almost all the 50 states in the US. We also discussed the current US elections, especially Donald J Trump and what his candidacy means to the US and the world. The trip back was educational to say the least. The day couldn’t have gone better.