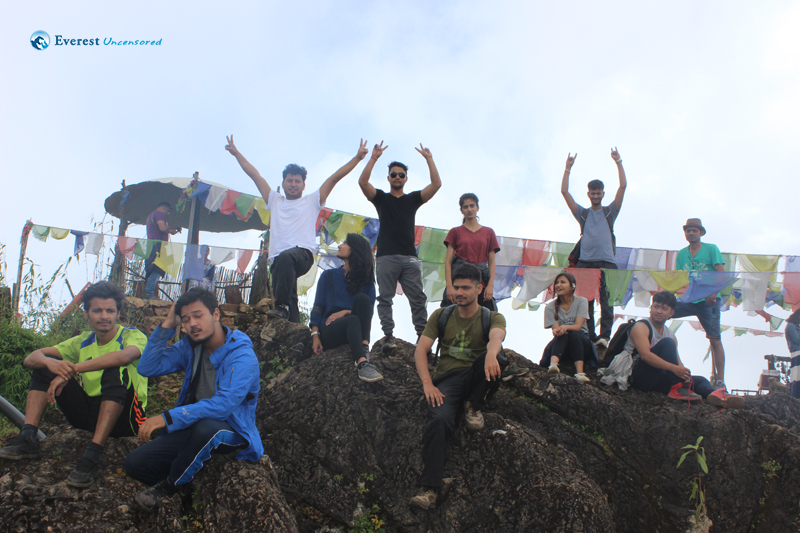 Briksha Dhungana On 8th September, Saturday the total of 11 hikers including an admin member set out for a hike to Tilkot from Lapsiphedi. Everyone were informed to gather in the college premises by 7am. After we reached the college we all were surprised, because our hike route was changed to Phulchowki. Everyone were excited by listening the place name, with all the excitement we started our journey.

College micro dropped us to Godawari, from where we were about to start our hike. We had our breakfast there and our journey started. We took the way of jungle since it was the shortcut to our destination. It was fun walking but since it was a rainy season the jungle was full of leech and those leeches just ruined our happiness. But finally we met the way of road, but everyone were not in the favor to go by the road way, so we again decided to take the shortcuts even though we all were already scared by the leech. But luckily there were not much leeches than that in the first big jungle.

It took us 5 hours to reach to the top which was our destination. We walked 13km to reach to the top, but it was worth it. The place was full of beauty and scenes were just mind-blowing which didn’t easily ruined our happiness, we were feeling like we were inside the clouds. All our tiredness just disappeared after we reached there. Since it was 2700m high, it was cold up there, so everyone was in need of some good food. There was an army camp and they had started a canteen up there where we could find some good hot noodles. So even we tried their food which was really good and satisfying. It was already 2pm so we returned to our stop.

We took all the short cuts while returning back except the big jungle, because the way was too sloppy and even some of the friends were not being able to walk properly because their leg was paining. So we returned by the road way. It took 2 to 3 hrs. while returning back which was almost half of the time than we took while going there. Finally we returned back to the station where the micro was waiting for us. Everyone was too hungry and tired and then we went to the Thakali restaurant which was near Satdobato. Finally, our hike ended with the good and delicious food.

Sagar ShresthaOn Friday,8th September we went on a hike to Fulchowki. We gathered at the college at 7 am sharp and left at 7:30. There were 12 hikers and, on the way, we sang songs and enjoyed a lot. We reached Godawari at 8:30 and we had breakfast there. We started our hike and discussed the route with the policeman.

It was a 13 km hike till up hill. The route was tough and leeches were in abundance. We also got lost a couple of times through our journey. We walked for 5 hrs to reach to the top. Around 2 pm we reached Fulchowki and we rested for a while and had lunch and enjoyed the view.

We returned to our bus stop at around 5 pm. We had a lot of fun during the hike and it was a memorable one. We had our dinner in a good cafe in Satdobato and all of us were tired and we were dropped at the college at 7 pm.