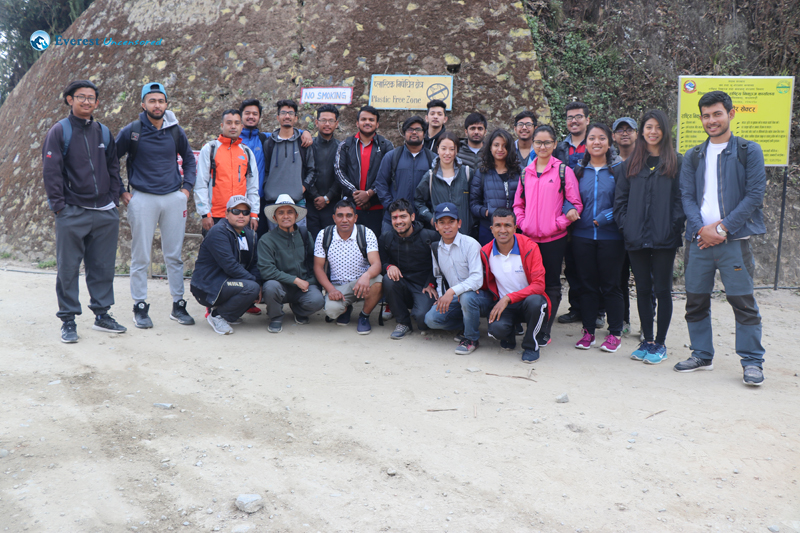 Aashish Sapkota
On 25th of March, DWIT Hiking Club organized a day hike from jhor to kakani for all club presidents, club vice presidents and CRs (student leaders) of DWIT. The main motive of the hike was to discuss about the ongoing club activities and class activities including the approach through which more desirable results can be obtained in the days to come. The hiking served as one of the productive methods to increase the efficiency of learning through the interaction between student leaders and the college administration.

All the 25 members gathered at Deerwalk complex at 7 am and made the beginning of the journey at 7:15 am. We reached Gurje Bhanjyang at 8:30 am and hiked to suryachaur and had our breakfast. The environment was filled with the beauty of green hills and the fresh air to breathe. After some conversation and group formation we started our hike from suryachaur to kakani. Surendra sir lead our way through dense forest. It was adventurous moment waking through the trails. During our journey to kakani we happened to follow the wrong route and had to walk through the unexplored part of the forest but finally met the right trail and made it to kakani at 1 pm. We had our lunch at Kakani Scout Center and enjoyed the beautiful landscapes of the place. Every members were able to explore the beauty of the place.

After the formal meeting between club presidents, CRs and admin members, this was the preeminent goal of the day. We ended up with surendra sir’s special “kakro” and “nun khursani” and headed towards Kathmandu at 4:30 pm.

Hike from Jhor to kakani was one of the best experiences I have had in the recent time. The hike was a very special one because the hike was only for CRs, presidents vice presidents of different clubs of DWIT and admins. We were called at the college at 6:45 in the morning. After everyone arrived at the college we headed towards Jhor, the starting point of the hike. We were already hungry when we reached there so we had a short hike for about 45 minutes to Suryachaur and had our breakfast there.

We took lots of group as well as individual photos there and resumed our hike from there heading towards Kakani. It was a beautiful sunny day. The beginning of the hike was a little difficult as we had to walk up the steep hill through the middle of the forest and the temperature was raging hot, but the breathtaking view of the valley below made us forget every bit of difficulty we were facing. After walking up the hike trail for some time, we decided to take the shortcut through forest. We entered the forest through a narrow trail and followed the path for some time, but the path eventually disappeared and we were all lost in the middle of the forest. We took a small break there and discussing as what to do next as we were lost. During the break we also tried to find our location through google maps but that did not help at all as there was no signal. So, we had a discussion whether to go back the same path we came through or move ahead through our instinct, and we decided to move ahead rather than going back. With our instincts we moved ahead climbing a hill then again climbing down the hill from a steep path. The path was filled with dry leaves and was very slippery so we had to be very careful while going down the hill. Many of us slipped and fell on the way. I literally had to run from one tree to another to support myself and not slip. About after half an hour of going downhill we found the hiking trail. We all heaved a sigh of relief and slid our way into the trail. The trail was quite easy and comfortable. After walking for about 30 minutes we had some light snacks that we had brought with us in the shade of the forest. After recharging ourselves we walked for about an hour and finally reached our destination Kakani Scout Center at around 1:30 pm.

The beginning of the hike was a little difficult as we had to walk up the steep hill through the middle of the forest and the temperature was raging hot, but the breathtaking view of the valley below made us forget every bit of difficulty we were facing.

We rested for some time there, freshened up, and had our lunch a Kakani Scout Center. After having our lunch, we had a meeting which was the main reason for this hike. In the meeting we discussed about different stuffs regarding ourselves and college. The meeting was almost about 2 hours long. After the meeting was over we had cucumber and pickle and got into the college bus and returned back to the college. We reached college at around 6 pm.

The hike was a complete package of fun and adventure. Though the hike was short but we had one of the best moments of our life and not to forget we carried back great memories along with getting to know about each other and also stronger friendship, bond and respect among each other. And hey! Isn’t hiking all about stepping out of our comfort zone and having some adventures? A big thank you to the hiking club and DWIT for such a memorable hike and cheers to all the hikers out there.

One thought on “One Day Kakani Hike”