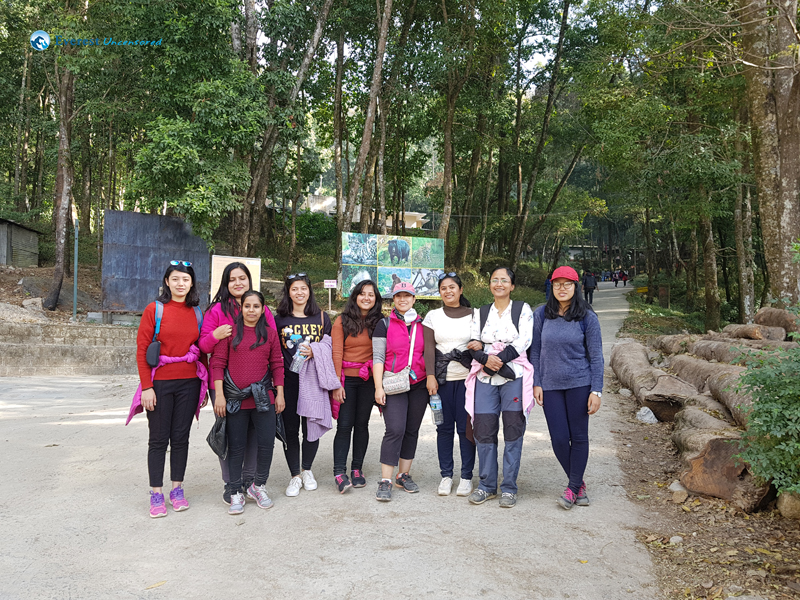 An all-girls hiking trip- my first one ever in Deerwalk, started in a sunny morning of December 16, 2017. All of us girls were all bundled up and ready for the hiking early morning at 7:30. The Deerwalk van took us to Tokha, where we planned to set off for the hiking. We spent few minutes there- of course had to fill up our tummies before we started the hike. The “Chana tarkari” breakfast gave us some boost and we started walking up the main road asking the local people the way to Nagi Gumba because no one knew the actual way to get there. Little did we know that the road we took would take us to Shivapuri National park first and then to Nagi Gumba. We asked at least 5 people the direction to the Shivapuri National park. Not knowing the way to our destination was actually the highlight of this hiking trip which made it even more interesting and fun.

On the way, we came across beautiful landscapes, and the surrounding farmlands had orange and grapefruit trees. We made sure to take some pictures as well, as we walked along. As we reached up-hill towards the Shivapuri mountain, the view of the Kathmandu city got hazier due to the pollution which was really saddening to see. So, there were no panoramic view of the city, nor the Himalayas as we had expected.

Upon reaching the top of the hill, it felt like the Buddhist flags were welcoming us. We could already feel the serene and spiritual ambience.

We reached Shivapuri National park (located in north of mid-hills border for the capital city of Kathmandu Valley) around noon time. After registering at the park entry gate, we started walking to get to our next destination- a hilltop Buddhist monastery called Nagi Gumba. The walk through the woodlands of the National park was very pleasant. As it was a dense forest, there was very little sunlight so the temperature was colder in some parts as we walked further in. It was good to see trash bins in most of the areas to make sure the place is not littered and there were signs that we followed to get to our destination.

After walking for about 3 hours, and climbing up about 400 steps, we finally reached Nagi Gumba. Upon reaching the top of the hill, it felt like the Buddhist flags were welcoming us. We could already feel the serene and spiritual ambience. The Buddhist nuns in the monastery were very nice and hospitable. We spent some time up there taking snack break and went in the monastery and took ample pictures.

The hike back to the exit of Shivapuri National park took us less time- may be because we were starving and walked faster. Our van was waiting at Budhanilkantha where the Narayanthan temple is located. It was already around 4:30 pm and we had spent the whole day without eating a proper meal so we were really hungry. We collectively decided to go for Thakali menu to satiate our hunger but as it was an odd time for lunch for 10 people- it took them more than half an hour to prepare the meal. As the saying goes- “Patience is a virtue” we all waited patiently for the food to be prepared but our wait was all worth it as the Thakali food was really good and satisfying.

This hiking was overall a fun one as I got to mingle with girls from another team I had never even talked to. We had fun chats, shared interesting stories about our lives and most importantly, we had a wonderful time all together.

“Escape the ordinary” was my purpose for the hike to ‘Nagi Gumba’. This was my first hike from Deerwalk and I was very excited because it was All DW Girls Hike. The hike day was a fine winter chilly morning and the day was warm. The girls group gathered at office and left office premises at about 7:30 am for our hike destination ‘Tokha’.

We had our breakfast and briefly discussed our hike route, as we all were confused about it and our real adventure was on board. This hike was such a great opportunity for me to know other team members of DW. The trail was easy and hike was even more exceptional because of the girls clan. I was really into the nature, away from the busy, dusty city KTM. Our first trail was a suburb and the people we met on our way were very friendly and helped us to identify the route.
We reached Shivapuri National Park, the gateway for Nagi Gumba at around 11:30 am struggling through the routes. The trail was into the wild as it has conserved wild animals and plants species, the sanctuary is such a peaceful natural place and has been a native for wild. As I walked into the woods I could realize that all good things are wild and free. I could actually breath in some wild air with mindfulness.

Some of our refreshment were stolen by local monkeys.

After a hike for almost 2 hours we finally reached our destination, Nagi Gumba and we all sighed in relief. The place wasn’t much to see for eyes, but the waving prayer flags, cheerful kids of monastery, hymns, the symphony of leaves and, wild air all of them were therapeutic to soul. We visited the gumba, took many pictures, and did some devouring too. Some of our refreshment were stolen by local monkeys. We couldn’t enjoy the view of Kathmandu valley as it seemed to be rather polluted which was in stark contrast with the place we were at.

The journey downhill was equally gratifying. Even though we were tired, it took us less than one and half hour. It was rather short walk as gravity seemed to make things much easier. Our office van picked us at Budhanilkantha (Narayanthan) mandir and driver dai took us to a very delightful thakali food serving place where we waited for 40 minutes to fill our tummies and the wait was worth; which was a very splendid way to end the hike. The memories made in those hills will always stay in our hearts.

83 thoughts on “Nagi Gumba: Hike Through a Natural Paradise”