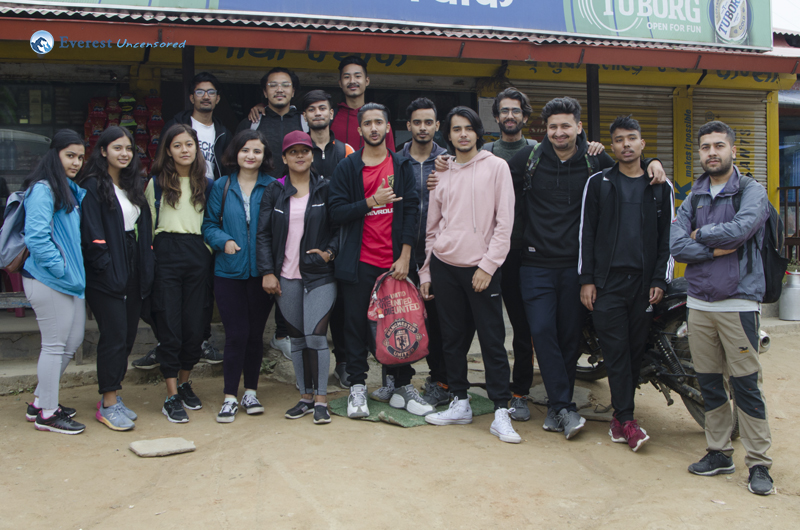 On the 20th of October, 2019 DWIT hiking club conducted a one-day hike to Nagarkot . A total of 17 selected hikers assembled on DWIT grounds to get ready for the adventurous journey to Nagarkot. All of us gathered around DWIT ground around 6:30 am and left the premises at 7 am. Enjoying every moment on the way, we reached Jarsing Pauwa at around 8:30 am where we enjoyed a wholesome breakfast which obviously boosted our energy to another level. Then all of us got ready for hike. Before starting our hike we had a group photo which was undoubtedly amazing.

We started our hike from Jarsing Pauwa at 8:45 am sharp. At first, it was quite a easy task as the energy level of everyone was at the peak, we all moved quite fast listening to the music. Honestly for me music during the hike was one of the best thing. After few minutes we entered into hills. It was full of those sticky plants which eventually gave all of our pants a new look. At the forest many of us got leeches on our feet which was plainly horrendous. Around 10 am we came out of the jungle. By the time everyone got jaded so we decided to take a pause around 10:06 am. After few minutes we again continued with our hike. The way was not that knackering it was kind of fun, adventurous. Around 11 we stopped at a spot where we had some food provided by the club. After some hours of walk we reached to our first destination which was the tower. There almost every one of us climbed the tower except for our few girl mates as they were uncomfortable with heights. The view from the tower was a bit disappointing as the weather was very gloomy. Apart of that the cold wind chills was something unexplainable. Around 1:10 we all sat down, had a little gossip, and ate out remaining food. At 1:35 pm we were again set and started to head towards our next destination Kalmasi dam. At 2:30 pm we reached to our second destination. Our hike club were very supportive, friendly .They gave us every information they could possibly give us. After that we headed towards ManPokhari. By the time it was almost 4:15 pm. We went a bit downhill and waited for our bus to arrive.

Our bus arrived at around 5:00 pm and we went to the hotel for the lunch. We had some really delicious thakali food which made a lot justice to our hungry stomach. Overall this hike was really fun, this hike made all of us know each other. The hiking club really did their level best to ace this hike and make it the best they can.

The DWIT Hiking Club had organized one day hike to Nagarkot on 20th October. The route of the hike was Jarsingpauwa – Nagarkot – Telkot which was a pretty lengthy one. The hikers gathered to Deerwalk Complex by 7 A.M. We had a short introduction session as there were a lot of new faces from the Batch of 2023. After that, we hopped on the bus and set off for our journey. We reached Jarsingpauwa at 8 A.M. which was the starting destination of our hike. We had breakfast at a local hotel which lifted the energy of all the hikers raring to go.

We started our hike at 8:45 A.M. with everyone singing and vibing with the surrounding. Everyone was so friendly to each other and there wasn’t a single moment where someone felt bored. We were catching a lot of different routes on the way as none had the perfect idea of the route but after all hiking is all about getting lost in the nature. One thing that really impressed me was that none of us ever stopped on the way. So, because of that attitude too, the hike was a success. We finally reached our destination Nagarkot at 12:58 P.M. We climbed the Nagarkot Tower and the view from it was very beautiful. After that we had lunch nearby the tower and descended to Kalmasi Dam. We rested for a while and then again started walking. While crossing the lake, unfortunately one of the hiker fell into a ditch which was a sad moment but everyone helped her which showed the team spirit among us.

We finally reached our last stop which was Muhan Pokhari in Telkot. Everyone waited for the bus while having a good chat. The bus came at 5 P.M. and we returned back to the valley. We had a good thakali dinner at Naxal and then returned back to college. Everyone bid farewell to each other and this was the end to a wonderful hike which I thoroughly enjoyed.