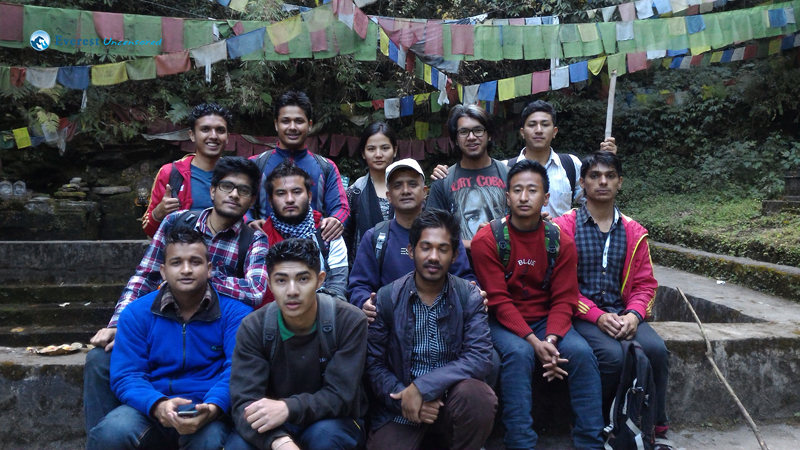 On 29th November 2015, DWIT Hiking Club organized 18th one day hiking. 14 students of DWIT went for hiking, which was coordinated by Abishekh Khatiwada. The route of hiking was set from Shivapuri to Kapan Gumba. Later on, the start and end point of hiking was changed. The students hiked for 7 hours, starting from Nayapaati upto Paani Muhaan.

As per the clear note provided by Hiking Club to the list of final hikers, hikers were asked to reach college premises by 7 AM. Due to unpleased strike declared, students were slightly off from the asked time. However, we had a great groupie feeling and we waited for them, had something to eat and got ourselves set up to reach the destination. On the way, we got off the van and bought food items. Then, without lingering much, we headed towards the point from where we had to start our hiking event. While we were travelling by van, we had a negative feeling of getting blocked by protestors.
At around 9 AM, we got off the van and started walking up the stairs. I guess, we climbed around 200 stairs that day. There were pitched roads beautified with tall pine trees on both sides. We walked on the roads with twists and turns. We passed through beautiful villages and encountered amazing people by the roads. We had a walk on plain roads and ended up very soon. Then began the route of hiking.

With the starting of foot trails leading up-hill, students got excited. This hike had nice combo of some new hikers and many regular hikers of DWIT. Due to excitement, students took energetic steps but soon got tired. Anyways, we had concrete plan to reach Nagi Gumba and Baagdwar.

We sang songs, cracked some 18 plus jokes and captured beautiful glimpses. We saw houses damaged by earthquake. We saw beautiful village named Taarevir. The village was on the lap of a giant hill called Taarevir. Taarevir is famous for meditation.

At around 12:30 AM, we reached Naagi Gumba (Ani Gumba). It was beautifully situated and built artistically. People from foreign country also come there to practice Buddhism. I met two people one from Denmark and next from Austria, and came to know that they practiced Buddhism for compassion. Philips, guy from Austria, also mentioned that National park is charging high fee to stay. Thenafter, we sat together making a circle and ate energetic foods.

Without any delay we headed to Baagdwar, the origin of Bagmati River. The way started with stairs and ended with stairs. We legs started aching. We had to take rest after climbing 15 stairs up. Sometime we felt like let not reach Baagdwar. We should get way back. In our lives also we get the hardest moment. I f we tilt and shift little bit we may not get what we want. It was learning lesson. We reached Baagdwar at around 2:30 PM. The place was beautiful. Water was too cold. We could hold water not more than 20 secs. I think the place get light only when sun comes in zenith. We had final round of snacks. We drank water fetched from Baagdwar. It smelled like milk.

After having snacks we descended through stairs. Our final point was Paani Muhaan. Climbing down the stairs is harder than climbing up. Some of us set an idea that we should run and then sit for few minutes and then run again. This should bring easiness. We did accordingly and we really felt that it was awesome. After an hour of hard time, we touched the motor-way. Then we took a long breathe, a breathe for change. We reached Paani Muhaan Army Camp at around 5 PM. By the time we reached there, Deerwalk Van was waiting for us. We made last attempt to force our body inside the van.
At around 5:30 PM, we had dinner. It was delicious. It was my first mutton curry after the one I had on Dashain . The hikers had a lot of fun. I have made an album of memories from this hike as well.

Pratik Budathoki
DWIT Hiking Club organized hike from Nayapaati to Paani Muhan. The start time was scheduled for 7:00 am, but because of the rumors of Nepal Banda students were not sure about the hike. Later, after knowing that the strike was not that effective, the hike started at 8:00 am. Surendar Adhikari, DWIT Campus Chief, represented the administrative side of the college and two club members (Sanjeev and Abhisekh) were present to represent the club.

We started with a heavy breakfast near the college. Then, we went to Super Market to buy snacks for the day’s walk on the college vehicle. The vehicle directly dropped us at Gokarna from where the hike was to be started. Everyone started walking with full of excitement. Our first target was reaching Ani Gumba. This gumba was inside Shivapuri National Park. On the way to Ani Gumba, we were stopped by two officials of the National Park. It was then that we realized we didn’t have the tickets to enter the park. Surendra Sir had a talk with these officials and we were allowed to move ahead. After around 3 hours of walk, we reached Ani Gumba and had our first snacks. Then we had the target of reaching Bagdwar. The way to Bagdwar was tough. The path was nothing else but steps. After climbing those steps for another 3 hours, we finally reached Bagdwar. We then had our second snacks.

It was then the time to return. We then started our walk again towards Paani Muhan. The way down was steps again. We had to walk for another 2 hours to reach Paani Muhan. All this time, we saw very few people. Finally, we reached Paani Muhan and our vehicle was ready there to take us back to college for delicious dinner. After the dinner, every one headed towards home.