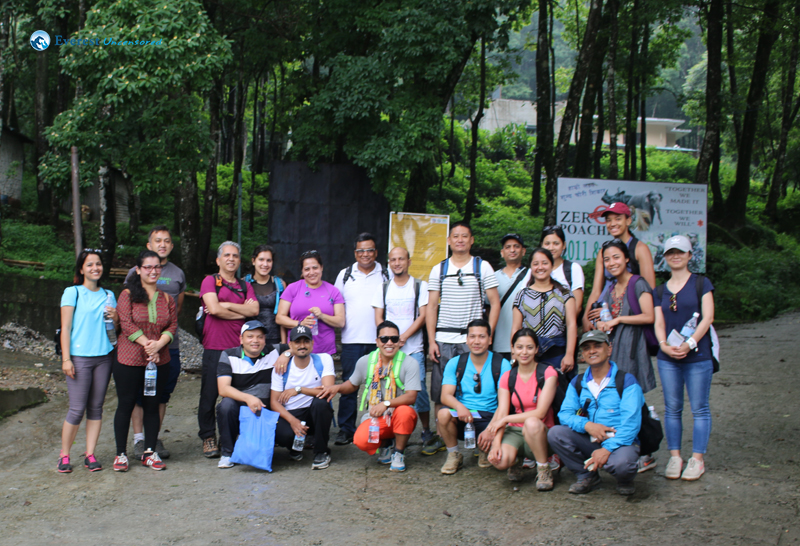 Mahika Pandey
Our hike began in Budhanilkantha when the bus dropped us off at the base of a long, rocky road. After the uphill climb under a decidedly blazing mid-morning sun, we reached the entrance of Shivapuri National Park, next to the Vipassana center- it was somewhere in this ten-minute window buying tickets that it was decided Deerwalk would host its own Vipassana! As I was told, the hike would really begin upon our entrance into the park, which held true as a few steps within the gates revealed a vast expanse of wilderness, all sounds of the city beyond muffled by the canopy of dewy green leaves and the chirps of birds intermingling with the occasional rustle of a monkey, swinging from branch to branch.

We spent the next few hours trudging along the dirt paths that wound through the woods, pausing occasionally to admire the sweeping expanse of the Kathmandu skyline, or to munch down some cucumbers and peanuts, coupled with a Carlsberg or a vodka shot (although, let the record show, I did not have any!). While the first few hours were a steady and unrelenting ascent, the trail plateaued to a flat trek under shady trees, on the sun-beaten sand, and through a few small streams.

I can’t quite believe I did this without losing it over the formidable drop to the river below.

One notable moment was when we came upon a bridge over a river that, because of the rainstorm the night before, was completely filled with water and virtually uncrossable, unless we wanted to drench our shoes and socks in muddy water. While a generally undesirable state of being, this was also unattractive because of the heightened risk of leeches- which were the ultimate stressor of the day for many hikers, including myself! We crossed the bridge rather precariously by climbing on to the thick stone rail one each side and inching across to the other side. In hindsight, I can’t quite believe I did this without losing it over the formidable drop to the river below.

After the bridge, it was a short twenty minutes to the Karma hotel, where we had lunch. At that point, we had hiked about 10 miles (16 kilometers) and it was about 2:00pm. That’s not to say every hiker reached the lunch place at the same time; there were some (rather tipsy) stragglers who came in almost an hour later, toting stories of lost phone fiasco and several empty bottles of vodka. We were at the restaurant until almost 5:00pm, chatting, playing cards, recuperating and checking for leeches! The food was filling and well-deserved, although, to be frank, it took a ridiculously long two hours to prepare it.

Finally, when all had eaten, we began the 40-minute sharp descent down to Sundarijal. While it was quick, the hike down was more difficult than anticipated for me, as I felt the endless stretch of stairs begin to take a toll on my knees. We passed through the Sundarijal dam; the whoosh of literally tons of water plunging down to the rocks below, muting all other sounds, coupled with the sight of icy white curtains of water threaded through the wooden structures of the dam made for a stunning sight. From here, the green forestry dissipated into more urban area and small cobbled streets, dense with shops. We walked about ten minutes before reaching the Deerwalk bus! Within a half an hour, the rest of the group had filtered on to the bus and we were on our way back to Kathmandu.

For me, this hike was a testament to natural beauty in Nepal, beautifully preserved in this national park, just a short drive outside of the Kathmandu valley. It’s really amazing the expanse of forestry and wild life that can be preserved in Nepal within just a few dozen square kilometers!

Lauren C. Lamb
We arrived at the Deerwalk Complex at 6:45. An early start to a long Sunday. People jammed into the bus with their bags, ready for the hike. The bus rolled out of the lot a little past 7:30 and drove through Kathmandu to reach the hiking spot. Before we reached the National Park, we reached a road too damaged from the rain the previous night for the bus to continue. We piled off the bus and walked up the steep road on foot instead. Snacks and water were handed out before we began. We maneuvered up the road around the flooded areas and rubble.

After about 45 minutes, we reached Shivapuri Nagarjun National Park, which was directly across from a meditation center. We got the tickets and entered the park. As we walked, we passed a military outpost. The weather was cool, not too hot and the rain held off for most of the day. The national park was a lush forest surrounded by trees.

When there was a clearing, we could see Kathmandu from a different perspective and the mountains on the other side of the city since it was not too foggy.

When there was a clearing, we could see Kathmandu from a different perspective and the mountains on the other side of the city since it was not too foggy. We stopped early in the morning around 9 to drink our beverages before they got warm; then we continued with the hike.

Around 3 we arrived at the stop for lunch. We ate chicken, rice, and noodles. We rested for nearly two hours then finished the hike. It was all downhill from there. We walked down hundreds of steps past rushing rivers and pipes. There was even what appeared to be an out of commission water mill.

We finally reached the bus and piled on, tired from the hiking and full from the late lunch. We drove quickly through the more rural outskirts before we reached Kathmandu, where there was a lot of traffic. Overall, the hike was incredible. The pleasant weather made it enjoyable rather than a physically taxing effort. Talking with people as we walked made the time go by until lunch. The scenery was beautiful. Looking out on Kathmandu and the mountains and the trails ahead, below, and around us was breathtaking. Seeing the natural beauty of Nepal was quite a change from the urban city that I am becoming accustomed to.

This was the first time I hiked in Nepal. In fact, I’m not a pedestrian in china.But coming to Nepal, the best hiking country in the world, I want to try to love hiking.Sunday’s hiking was fun, not as tiring as I expected.I enjoyed the hike and wanted to try something I haven’t done in Nepal before. Thank you everyone.