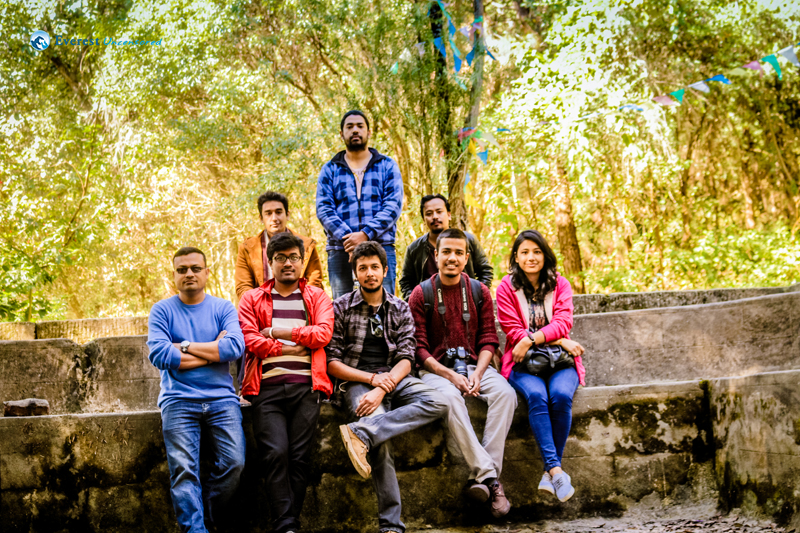 The drudgery of work is a constant stream of water chipping away and eroding at the mental wellbeing of any man and woman. I think I speak for everyone who went for the hike that a day away from the constricting concrete jungle of Kathmandu to the welcoming arms of nature cleansed our mind and reinvigorated our body.

The moment we stepped off the bus at Chandeswori Temple we got a taste of the bliss waiting for us at our destination. It was a type of serenity rarely experienced by city dwellers. We were not assaulted from all sides by noises, our breathing was not supplemented with pollution and the scenery was not a bland dust coated beige but lush greenery that was so very pleasing to our eyes.

The not so trekking guide extraordinaire (for reasons that will become apparent later) Nimesh Deuja started the expedition taking us the off trail from the more common route to a more scenic and wilder route. The path was so dense with trees and bushes that we had to bob and weave to dodge all the vines and branches that obstructed the pathway. Some places almost required us to almost get on all fours to advance. It goes without says that the path to our destination was great fun.

We reached Mini Gosaikunda and stayed a while drinking, talking, laughing and enjoying the scenery.

It was time to return, but there was one problem, our guide who was Nimesh Deuja was nowhere to be found! He was enjoying the hike, so much that he didn’t even wait for us and descended the return route all alone.

It was time to return, but there was one problem, our guide who was Nimesh Deuja was nowhere to be found! He was enjoying the hike, so much that he didn’t even wait for us and descended the return route all alone. Some guide he turned out be. So we were left with no guide and unsure of exactly which path to follow, but with some backtracking along the way we were able to return to our bus and be reunited with Nimesh.

It was late afternoon and no one had eaten anything since the start of the hike. We stopped to get some lunch on our way back home. Another round of merry making and it was time to return home. It was a fun experience and we all got to better know each other and come out of the experience as even better friends than before.

On 20th November, 8 participants of Squad C had planned to go for a hike to Mini Gosaikunda. I arrived at Deerwalk Complex at 8.15. We waited there for all the participants to arrive, and then we left the complex at 8.30. We picked Nimesh on Surya Binayak and we continued our drive for 10-15 more minutes before we dropped out of the bus to have a light breakfast.

The drive continued for 10 more minutes, and we stopped at Chandeshwori Temple to start the hike in a holy manner. We started the hike through the forest, and the hiking track was only going up and up. It felt more of a ‘hike for photography’ as Avaya and Kanchan were trying to take beautiful shots with their camera, and the rest of us were trying to be captured in their frames.

After 1 hour of fun-filled hike, we reached to a tower where we rested for almost half an hour, cracking jokes on each other and pleasing our eyes with the mesmerizing views of the mountain range.

We continued our hike, while Avaya and Kanchan were busy in capturing beautiful, candid moments of all the hikers. We also made a #MannequinChallenge video, which could only be successful after multiple re-takes.

We continued our hike, while Avaya and Kanchan were busy in capturing beautiful, candid moments of all the hikers. We also made a #MannequinChallenge video, which could only be successful after multiple re-takes.

We reached Mini-Gosaikunda at 2 and rested for half an hour. After that, we started going downhill to reach Dhulikhel, where Nimesh was waiting for our arrival in the office van. Then, we had an amazing dinner at a restaurant at Banepa and got back to our homes.

111 thoughts on “The Mini Gosaikunda Expedition”