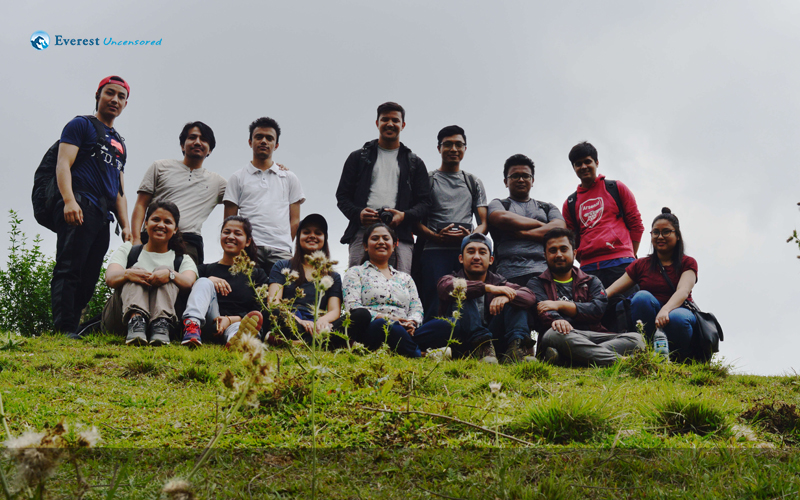 Hiking to Balthali village is a pleasure one would not want to miss. At a distance of only 36 km from the crowded and polluted city of Kathmandu lays a village so pure and solely touched by nature.

On April 5th, 2018 out of total 14 hikers, 11 hikers were gathered at Deerwalk Complex early in the morning for one-day hike to Balthali. Since it was my first hike from Deerwalk, I was very excited about it. We left the office premises at around 7 for our journey. Remaining 3 hikers were picked from their respective stops on the way. After the drive of one and half hour, we stopped at Banepa for breakfast. After breakfast, we left for our next destination Panauti.

We officially started our hike from Malpi Rd, Panauti at 9 AM with much enthusiasm and energy. After catching the cultural insight and walking through the roads of the Panauti we had a glimpse of the traditional lifestyle of the local dwellers. Open green field filled with potatoes farm seemed to be very well cultivated. Clicking pictures and admiring the sight, the trails lead us to Panauti Hydropower Reservoir. After resting there for a while, and clicking few more pictures and selfies we continued our hike towards Khopasi. Walking the off roads paths and hanging bridges through villages with beautiful scenarios, we reached Balthali village at around 12 p.m. Lunch at Balthali eco village resort was pre-decided. So, we walked down the hill from the top of the Balthali village, crossing the third hanging bridge and climbing one more hill, we finally reached the resort. We were welcomed and served with delicious lunch. The magnificent view from the top was worth all the walking. We all sat down on the patio of the resort and started glorifying the beauty of green lush forests, rich terraced fields, and lifestyle of local people. We shared each other’s memorable experience of the hike so far and by the time we were all well rested; now it was the time for us to head back to Kathmandu.

We all sat down on the patio of the resort and started glorifying the beauty of green lush forests, rich terraced fields, and lifestyle of local people.

Even after the exhausting hike some of us had outlived energy to have ‘Bottle flipping’ competition in the moving van. This wasn’t the end of the day for us. Since the evening was vibrant and so were we that we all decide to visit Sidhhapokhari pond which is located at Bhaktapur. The soothing atmosphere around the pond aided to diminish all our tiredness from the hike. After having snacks at a nearby restaurant, we left from there for Deerwalk.

A moment lasts all of a second, but the memory lives forever. This memorable hike to Balthali with Deerwalk colleagues will forever be cherished.

It had only been two days since the change in my designation from an Intern to a regular employee, thus it became one of my very first hike in Deerwalk. The hike began on a normal note. There was a form that was to be filled and the selection were to be made on a first-come- first-serve basis. Thankfully, I was able to fill up the form on time or else, I would not have been writing this report.

There were 14 of us who were going to Balthali. We had to reach the office premises by 6:30 AM and the bus would then leave the office at 7 AM. This was the original plan, but due to strike, no local buses were available hence, most of us were late when we arrived at the office itself. I was pretty excited and this excitement resulted in my presence in the office parking at exactly 6:45 AM. I was confused when I reached for nobody else was to be found and I started asking driver dai and calling our hike coordinator- Uttam dai about the hiking status. As I walked towards the gate, I saw Rohita di standing beside the guard room. I was relieved knowing that I was not the only one to arrive so early.

At around 7 AM, every one of us (except Asmita didi and Uttam dai who were to be picked up from their respective locations) was gathered and we were ready to hop on the bus with the foods and the waters that were bought the day before. After 1.5 hour-long drive, we stopped at Banepa to have some breakfast. We ended up in a small Misthan Bhandar where some of us had black tea, some milk tea, some ate puri-tarkari, jeri-swari, chana and samosa-tarkari. It was now only 30 minutes’ drive to reach Panauti-Malpi School. We got off at Malpi School, distributed the foods that each person had to carry and started our journey.

The way was very muddy. It had been raining for the past few days and this day was no different. However, we turned out to be lucky since the weather was cloudy but there was no rain or sun. It was fun walking through the Khopasi Hydropower dam-side. The trail seemed boring at the beginning, but thanks to everybody around, it turned out to be really fun. Sanil dai was one of the first who had us laughing from the start. With his ever-long history of getting hurt in every outing and hike, we were very strict with him thus not allowing him to run or jump and scolding him every time he did something stupid. But he is one of the few who is so lively and can make anybody laugh with tears. Forty minutes later, we reached Khopasi Hydropower. There was a huge lake aside and we rested for 15 minutes along with random and scripted photo-sessions. I saw a man bringing his dog towards the lake and he dipped his dog into the lake, took him out and started shampooing him. This was very funny to watch rather than to read.

The trail seemed boring at the beginning, but thanks to everybody around, it turned out to be really fun.

Now, the only thing we had to do was to reach Balthali Eco Hill Resort, out ultimate destination for lunch. The real hike started from Khopasi where we crossed a suspension bridge (first) which was few meters long, again clicking a lot of pictures. Standing on the bridge made a lot of us dizzy because the bridge was moving the entire time, and the distance from the ground was also very high. We even tested the amount of time it took for an empty water bottle to land when thrown up from the bridge. Exactly 7 seconds. After crossing the bridge, everybody went straight to the restroom and from there we got divided into different groups. The first group- people who walked pretty fast and the rest of them were people who walked fast but were slowed down because of the 3 DSLR camera-men around. One cannot miss out on clicking pictures when the place itself is beautiful-all greenery, hills, rivers, flowers, but most of all potato bushes since the potatoes of this area is considered to be very famous and tasty. Also, one cannot miss out on walking since we had yet to reach our destination and back.

There were only the two of us who reached the second suspension bridge, and at this point we had to make our waiting game pretty strong. Hence, me along with Dibya dai, we started talking about trekking and stuffs beside waiting for the others to come. Everybody finally arrived within half-an-hour and then again-pictures. A while later we were walking inside a forest and the trail was pretty good. We walked for about 1 and half hour again to reach to our third-suspension bridge. The resort that we were to reach lied on top of the hill past the bridge and the way to reach there was very steep. This turned out to be a real challenge for all of us since we ran out of our breath after 5 minutes of walking. And we were glad that we conquered it. The resort was very calm and clean. The fresh air and the view soothed our soul as well as our eyes. After a hearty meal, all of us went to the terrace and we sat there resting and again-clicking pictures. We rested there for about an hour and we again started moving towards where we came from-Khopasi. Going downhill was not much of a big deal and we all were pretty fine by the time we reached the third-suspension bridge (now the first). However, we again had to go up-hill and it became really tiresome. We rested quite a few times when returning, all of us were very tired and we just wanted to sleep since we ate so much. An hour and a half later, there were 6 of us who reached Khopasi- Sanil dai, Dibya dai, Sagun, Shirish, Rohita di and myself. We had a lot of fun and laughs on the way, we even tasted Aiselu (Himalayan Raspberry). We then rested in front of a shop where we had ice-cream and just talked while waiting for the others to arrive.

We all got in our van at 4 PM and we left Khopasi taking the wonderful times and memories along with us only to land at Siddhapokhari, Bhaktapur. It was my first time to Sidhhapokhari and the ambience was very calm. There were friends who were gossiping and laughing, partners were peacefully enjoying the view, father-son duo who were feeding the fishes in the Pokhari. We ate momos and sausages at a local cafe there and we left our final destination to return to the office dropping some of us on the way and the rest of us in the parking. Nonetheless, the hiking turned out to be really fun. New friendships were made and lots of memories to be cherished forever. Thank you, everyone, for the wonderful experience.

2 thoughts on “Khopasi to Balthali Hike”