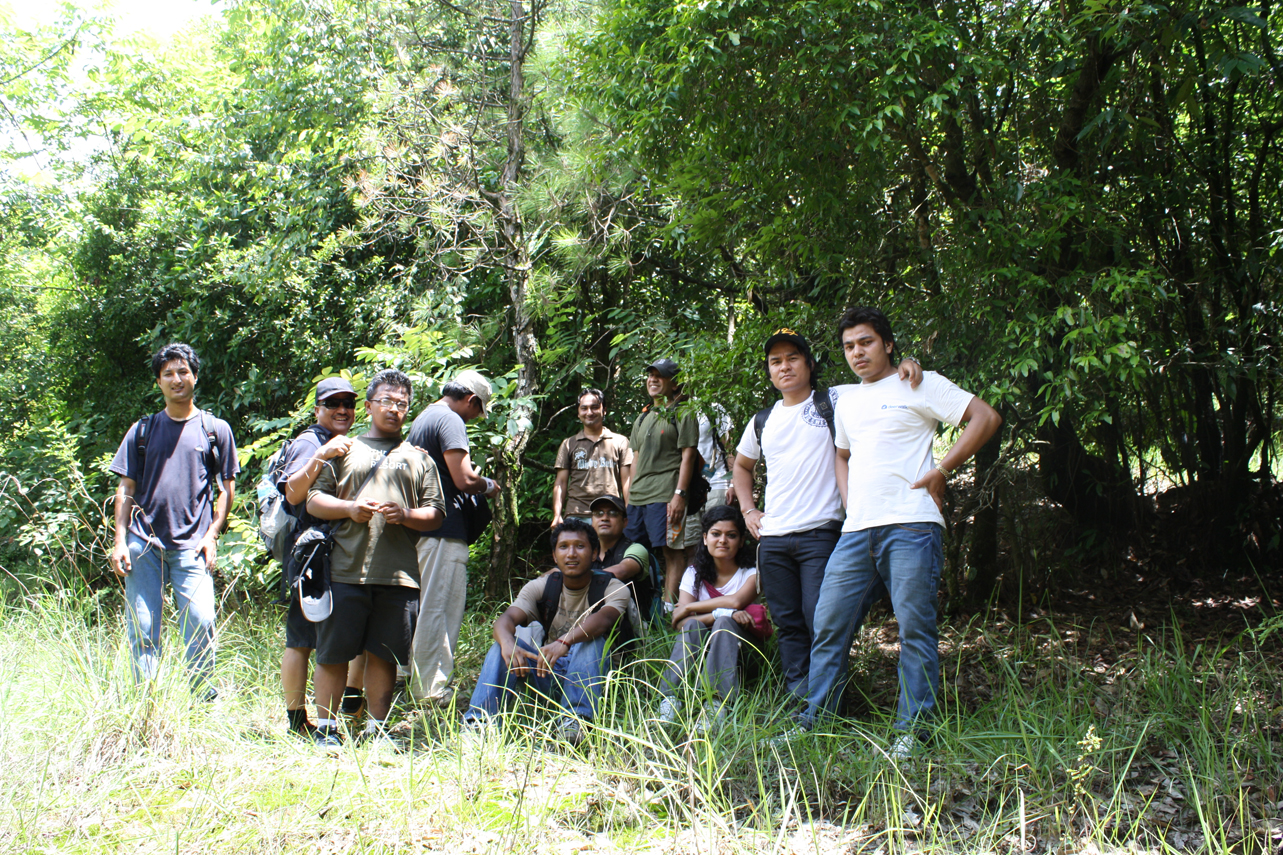 The QA team of Deerwalk had organized this particular hiking expedition around the north-eastern outskirts of the Kathmandu Valley. We had planned to hike around the Namo Budhha area but a last minute change of plans saw us embarking on this moderately tough hike. We disembarked the van at Kharipati which lies on the way to Nagarkot and started climbing along the foot trails. At times the trail broke off into paddy fields which were muddy and notoriously difficult to tread on without getting your shoes swallowed up by the mud. We rested for several brief moments while waiting for other member of our team to catch up in a thatched tomato farm relishing in the view of the concrete jungle and the airport runway.

As we ascended the flora and fauna of the area started changing. The tropical forest gave way to pine trees the leaves of which had fallen to the ground and were soaked with rain emanated a rich luscious scent. Most of the landscape around us was covered with thick moss punctuated by wild mushrooms of multifarious colours. Soon huge caterpillars were seen gnawing on the leaves of the bush and we knew that we were travelling on ‘the path less travelled’ when we came across spider and their network of webs. Nevertheless, undaunted we merrily trundled along seeking out foot trails from channels craved out by rain.

We reached Jaharsinghpauwa at midday at rested briefly before embarking upon the downhill trek into Sankhu along the motor road. We took numerous steep shortcuts along the motor route which were at times treacherous due to the slippery lay of the land. At the end of our descent we had to cross Sali River which was flooded due to the rains. The river current was pretty strong but everyone safely crossed the river and eagerly treaded to the van that was waiting for us.

We would like to thank the organizers for organizing such a memorable trip!!!

The first hiking-became-jungle safari from Deewalk was full of excitement, thrill and leg blowing. It was fun to chat with friends and lumber slowly into the jungle that has no sign of any foot trails. Known destination with unknown route made this hiking indelible from my memory.

It had been a while i went for a hike. Though i was so excited for Namo Buddha hike, last minutes change in plan led us to Telkot to sankhu hike. Hike was full of adventures. The forest was dense and trail had no real sign of human movement, but when Rudra dai is there to lead, there is no worries of path. Moving down hill on slippery path finding the short cuts was fun. Overall it was a good day out. Cheers to all the hikers!!!!

Our hiking was wonderful. Crossing rivers and streams when hiking can be one of the most enjoyable moments. Just a tip to hikers always let someone know where you’re going, so that you won’t be missed from the group.

This time the hiking team was very big altogether 16 members. We began our hike from Telkot soon after we finished our breakfast at Bhaktapur. It wasn’t a tough hike but the lack of proper trail and leeches and huge caterpillars to add, made the hike tough. Then we finally reached Sankhu , where Deerwalk’s van was waiting for us. We had our lunch at Thakali vancha ghar Sinamangal. We really had nice time during this hike.

I really enjoyed my first Hike in Deerwalk Services. At first I was really excited about hiking to Namo Buddha but later on plan changed. And we set up hike to Saakhu. First, I had planned to meet some of my near relatives in Panauti but plan failed as we started hike to Saakhu from Telkot. It was great trail.  Haha, literally, it was trail made by monsoon rain and I guess our team was the first group to walk on. Slipping on those trails, getting bite from Leeches, walking through the bushes, sweating, drinking natural water we made our hike success finally.

Before joining Deerwalk got a chance to go for a hike, which was a real excitement for me. Caterpillars and the leeches on the forest, climbing the unknown hills finding the way, taking short-cuts down the steep hills made the hiking more memorable.

As it happens always in Deerwalk, The Namo Buddha hike changed to Nagarkot-Sankhu. My aim for this hike was photography experimenting. So, I opened office DSLR and began clicks that went throughout hike. The trail through paddy crops, forests and steep hills was memorable. Lots of learning from a dog who followed us throughout and was a real great companion. Bhuwan dai who accompanied for second time  couldn’t help beat our Yarmashin Gadi experience but still he never misses to create fun.

I would like to remember this hike as a great participation from Deerwalk fellows in an activity after a long time.  Sixteen fellows joined the hike showing great enthusiasm and new start after shifting to new building in Sifal. I would like to thank all the hikers for making this hike as wonderful moment to remember.

I came to know that I was one of the participants of weekly hike of Deerwalk Inc only about fifteen hours before the actual event. Although I am not a tyro at hiking, it was a first experience hiking with ones who were senior to me. This trip did not need any preparation. I did not carry a bag so I did not have any weight tying me down.

On the day of the trip, my dad and I were picked up from our residence in Baneshwore. Our initial destination was Namobuddha but that changed to Telkot-Sankhu. This particular trail was chosen as it wound through thick jungle protecting us from the bright sunshine and midday heat.

The trek started with breakfast which energized us as we headed to Telkot, the starting point of our trip. The initial walk had an uphill narrow path but as it was just the start, everyone set off at a brisk pace. We took a lot of shortcuts along the road and I loved the paddy fields we walked through.

Climbing up the hill was the most difficult part of the hike. At places we were lost and had to trace our own paths. We had to deal with leeches and caterpillars on occasions but we also got to refill our water bottles with clean spring water whenever we ran out. After several strenuous hours we finally reached the hilltop. The downhill trail was quite pleasant. We then reached Jaharsinghpauwa which was a small village community with a school and branch office of a political party.

On the Jaharsinghpauwa-Sankhu trail the most interesting part of the trip for me was crossing a small river. I was quite confident that I would be able to cross it safely but when I was midstream, I realized that I had my cell phone in the right pocket of my pants and it would take very little to damage it in the swift current. Negotiating the current for a few meters seemed like walking uphill for hours at the time. With great effort and at a snail’s pace I somehow managed to cross the river safely.

I was happy to see Deerwalk’s van a short distance from the crossing. I found that the lunch taken in the late afternoon very satisfying.

कैफियत: – Two of the organizers (Ashish and Suraj) bypassed the treacherous descent by hopping onto a bus returning to Sankhu. We did not as it defeated the entire purpose of going on a hike.