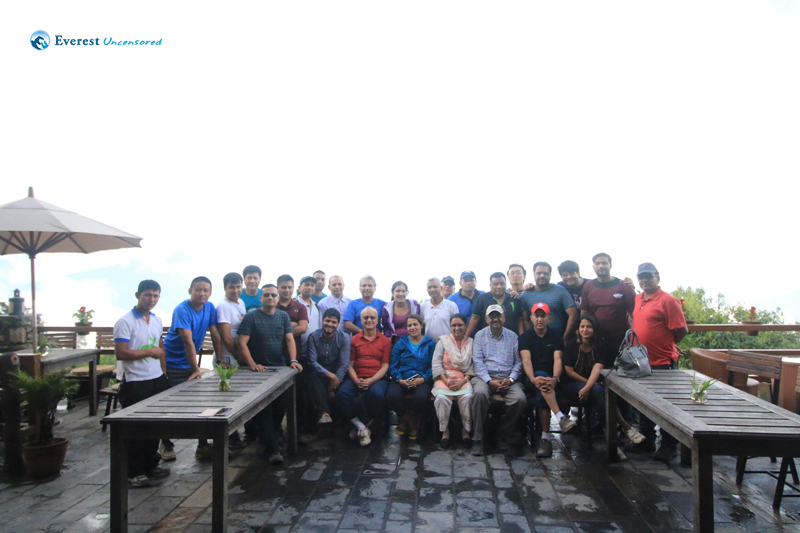 Aseem Bhattarai & Mahika Pandey
Twenty six of us, Deerwalk employees, IT4D (Information Technology for Development) conference delegates, family and friends, gathered on the morning of August 5th for our hike— the last event of the fifth annual IT4D conference. We ate breakfast together at 109 Degree, Deerwalk Complex, speculating about the danger of leeches in the rainy weather and comparing backpack gear. The day’s plan was to hike from Changunarayan, with a short stop at the Changunarayan temple, and then onwards to Nagarkot. The trip was estimated to have 3-4 hours, with Telkot marking the halfway point.
After a forty minute drive, we arrived at Changunarayan and walked a short way to the temple. It drizzled lightly all morning but, even squinting through the rain, the temple stood impressively atop a small hill, surrounded by ornate statues. Back at the bus, we parted ways with several members of our group, mainly conference delegates who would tour sights of Nepal before meeting back up with us for lunch. The remaining twenty three of us ventured into the forested paths and began our hike.

For the two hours, we trudged through small dirt paths transformed into mud by the early morning rainfall. More than few times my feet slipped on a wet patch of grass or a precarious rock and I found myself ankle-deep in mud. At one especially precarious junction, the path turned into a steep downhill and was less of a trail and more of a glorified mudslide. The only way down was by awkward stumbling and clutching the rocks that lined the sides— unfortunately, one of our hikers lost balance at just the wrong moment and slid down. He was not injured too seriously, save for a bruise or two, but he did have to complete the rest of the day with a large amount of mud smeared on the back of his pants.

The cooler climate helped because it would have been a harder experience if we had the bear the blazing afternoon heat.

Shortly after reaching this spot, we arrived at Telkot and were faced by long, winding stairs to the Durga temple. Although in hindsight, this was only a 15-minute climb, in the moment it felt never-ending. This was definitely the hardest part of the hike, with a little over half the distance remaining. The short break at the temple grounds was rather welcome, it gave us time to catch our breaths before we set of again – this time on a muddy trail, that wound around the hillside alongside traditionally built households with a foggy view of the landscape in the distance.

The cooler climate helped because it would have been a harder experience if we had the bear the blazing afternoon heat. This part of the hike was fun as it was mostly walking on level ground with short downhill stretches, occasionally stopping to check if we had picked up any leeches while wading through muddy grass. Most of us were lucky, but a few hikers found themselves scrambling to throw salt on their legs.

By this time, the hours had clearly taken their toll and some of us were lagging far behind, while some were far ahead and continuing energetically. We continued walking in the arid climate, stopping every now and then for people to catch up. The route eventually brought us across a small stream that had very nearly swept away our trail; we all had to choose between wadding across or taking a leap of faith by hopping from one back to the other. It was quite a sight.

The last uphill climb to the crossroads at Nagarkot was a winding track to the top of the hill. As we neared the top, we began to see the figures of our team members that chose not to walk, standing expectantly on the main road. After finally stumbling onto the paved road, exhausted yet triumphant, we clambered back onto the bus to finish off the day with a late lunch at a nearby resort.

The meal at the end was rewarding and the games that we played were fun, but the best part was trading in our muddied sneakers for clean slippers. It was a tiring day, but well worth it at the end, thanks to the individually interesting persona of the team. Almost everyone dozed off for a few minutes during the long bus ride back to the valley and it was early evening by the time we pulled back into the Deerwalk complex— a day well spent and a great way to wrap up IT4D 2018!

22 thoughts on “IT4D Hiking from Changu Narayan to Nagarkot”