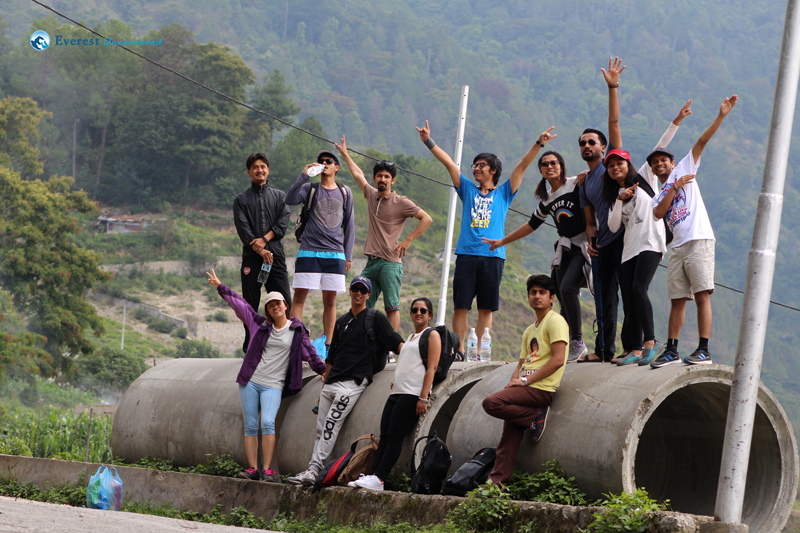 Before I start writing about the actual blog I think I have to first set up some disclaimers. I am the kind of person who doesn’t like going out very much. I like to stay put and maybe play games instead of going out in my free time. Some of my friends were surprised to know that I was going to do this.

The day started a bit early than the usual Sundays. I reached Deerwalk premises by 7 o’clock where I met up with our ‘best’ coordinator and few others. We left Deerwalk after some time and picked up the people as we started our journey to Tokha which was our starting point. There, we had small breakfast and divided the water and food to carry among us. After that, we were on our way.

There are some things about hiking that I usually observe. It is really easy in the beginning. The elevation isn’t that difficult and everyone is full of energy. Enthusiasm is high and nothing can stop us.

Then after about an hour or two, we start feeling the heat and the altitude doesn’t seem to help. Breathing becomes heavy and having conversation becomes almost impossible.

Then after about an hour or two, we start feeling the heat and the altitude doesn’t seem to help. Breathing becomes heavy and having conversation becomes almost impossible.The frequent breaks and cloudy sky help. In summation, there is a lot of things that can stop us.

Then we reach the place for our lunch and have a much needed break there. It took about an hour for the hotel to prepare our lunch. We passed the time playing poker. Soybeans don’t make for very good poker chips.

After lunch, we had rather easy path mostly because it was a descent. We exited the Shivapuri National Park and reached Budhanilkatha. We spent few moments in the temple and then we were headed back Deerwalk.

Despite having a hard working hour in office, when I knew about the one day hike I was full of excitement and energy. I thought this as a good opportunity to interact with all my team members. Exploring new places is always a fun part about traveling. I always love traveling and exploring new places, so I thought to make it a mesmerizing one.

I was very excited as this was my first official hike. Our hiking route was from Tokha to Budhanilkanth. The weather was partly cloudy so we were informed to bring an umbrella with us. I was unable to sleep a night before the hike, it may be due to my excitement.

This was the day which I had waited since long 28th May 2017. I woke up early morning because we were informed to be in Deerwalk Premises by 7:00 AM sharp.

Then, we all carried certain packets of chips, real juice, water bottles etc. for the way. Let’s start our hike! A noise came from behind and he was our hike coordinator. I put on my goggles and carried my heavy bag which was heavy due to my jacket only. It was around 9:15 AM when we started. Everyone was full of enthusiasm and excitement at first. Even me, I was walking ahead of all. The first part of the hike was steep. We all were going up by singing, listening songs, clicking photos. After an hour and half, I was already tired due to the steep. At a point, we all gathered and took rest for some time. Rather than, rest all were busy clicking photos and selfies. We can see the beautiful Kathmandu from there.

The view was so nice, no pollution anywhere because I could not see any vehicles from there. So, it was quite nice to assume Kathmandu is so beautiful and quite.

The view was so nice, no pollution anywhere because I could not see any vehicles from there. So, it was quite nice to assume Kathmandu is so beautiful and quite. Hope this will be one day! Then again after a little rest, we started our hike again. Now, its inside the jungle and the hike had become quite adventurous now because there was no way. We were making path ourselves. Inside the jungle, walking through the fallen leaves and hearing the bird chirping was the best feeling ever I guess.

We walked through the forest about 2 and half hours. We reached Dadagaon which was on the way where we planned to have lunch. As we were many, they didn’t have food for many people. So, they told that it would take around 45 minutes for them to cook food. So, we planned to play games. After having lunch at Dadagaon, we again started our hike around 1:45.

This time the way was not steep. It was plain way. We planned to reach the MuhanPokhari. Again we walked through forest but this time the path was quite easy. We could see springs on the way. The view of Kathmandu from the top was so refreshing. After walking for 2 and half hours, it’s time to move down hills. I could feel that rather than climbing up hill, it’s hard to walk down hills. By this time, I had no energy left. My legs were paining. We reached MuhanPokhari and clicked some pictures. Then, we exit from the Shivapuri National Park and headed towards Budhanilkanth where the office van was already waiting for us.

Despite the pain, I managed to reach the final point. We worshiped in the Budhanilkanth temple and moved towards the van. Most of them were dropped on the way. I along with other three were only left when we were back office. It was already 6:00 when I reached office.

I was tired, my legs were hurting but still I can say that was an awesome day. It was adventurous, full of excitement and refreshment. It was an well organized plan and all the credit goes to our hike coordinator. Overall, it was an wonderful day out with wonderful people.

3 thoughts on “Hiking from Tokha to Budanilkantha”