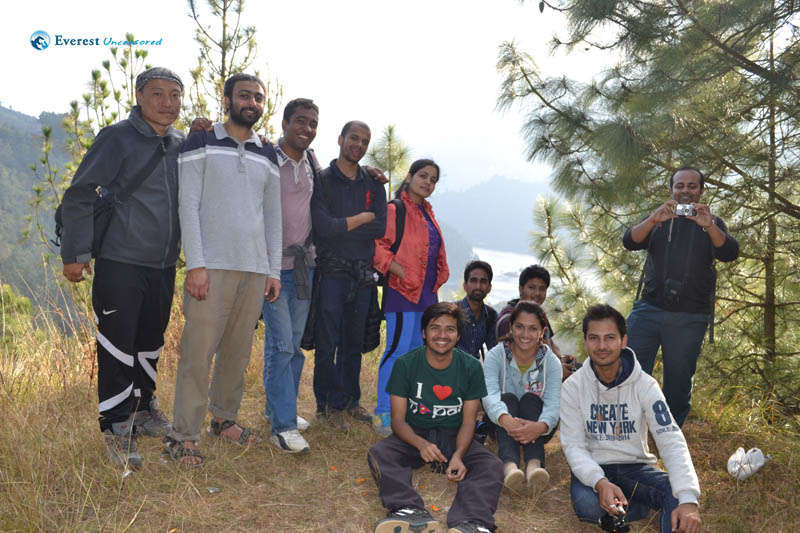 Krishna Parajuli
This was my first hike from Deerwalk so I would like to share some experiences before the hike.
A couple of days ago, Pramod dai, our Director of Operations, told us that we better be at our desk during office hours so that we could at least reply to hiking email before others (that not being the only reason, of course). Upon receiving the mail I wrote the shortest possible reply to register my entry and was glad to see my name among the list of hikers.

On Saturday, I slept early to catch up for the next day and was promptly picked up at 8 from Tripureshwor by the team. The hike started at about half past nine after breakfast at Godam. We started walking uphill and with the help of Google Maps, took innumerable shortcuts and made some trails of our own. It is up to reader to imagine the fun we had.

We reached Chandragiri Bhanjyang around half past eleven and the trail seemed to dip towards Chitlang Besi from that point. After cracking some jokes with Kishore dai and a light snack we sped downhill and reached Chilang around 2 in the afternoon. We looked for a place to have lunch at Chitland but could not find any and proceeded with the hike to Kulekhani dreaming of the fish we could get there.

In this hike I got to connect with a lot of awesome people.

In this hike I got to connect with a lot of awesome people. Walking with Prasanna dai and Surya Bhandari was real fun. I can’t forget the rap-debates I had with Sawan dai. Pawan dai, the all-time hero of Makwanpur, Rishi dai’s famous Rishipaedia and Sagun dai’s photography. I would like to thank Sushma didi for buying apples and oranges in Thankot as they proved to be invaluable during the hike. Anil dai who enjoyed noodles along with the seasonings. I am also very thankful to Deepak dai who picked up and dropped us off as late as half past ten in the evening.

It was a well organized hike and in the end I would like to say, “Damn! The Dam.” Kulekhani dam was beautiful as it scattered in the evening light into a gentle dance of glittering reflections on the hillside.

Nisha Thapa
I woke up late and felt that it was already late for the hike. I was taking the longest steps I could possibly take to reach the office on time. But I was amazed to see only four members in the office. Rishi Dai was contacting other hikers so that hike could begin on time. We left office at about 7:30 AM and picked up remaining team members on the way.

We had our breakfast in a local shop in Godam and collected some information with the locals about our route. After walking for few minutes the team was divided into two, which was unintentional. Our team confirmed with a local sister about the route. She left us with two options: one that would take short time but was not that easy and another quite long but easy to walk. Getting inspired from the story where the prince under similar situation chose to take the short route with a determination to face whatever obstacle that might come on the way, we also choose to take the short but difficult route. Route was steep and really difficult and at the same time thrilling. The view of the amazing scenario, beautiful flowers in the forest and of course some energy booster snacks kept us moving forward.

We were baffled that despite taking the shortest route, our fellow hikers were ahead of us. We again fueled up ourselves with some snacks and continued walking. After climbing uphill, against the gravity, we now had to walk downhill in favor of gravity.

Few members were “pulled by gravity” (Pulled by gravity–a phrase only we will understand) and the members I should not forget to mention were Sawan Dai and Sushma Didi.

Few members were “pulled by gravity” (Pulled by gravity–a phrase only we will understand) and the members I should not forget to mention were Sawan Dai and Sushma Didi. And how could I forget mentioning how I slipped few meters down the hill, which was scary then but funny as I remember now. I also lost my mobile. Kishor and Sandeep helped me find it out. This series of activities delayed us and we were lagging once again.

After few minutes walk, we met remaining team members, who were waiting for us. We inquired about our final destination with the locals. A few hundred steps and there it was, the majestic Kulekhani dam. The water was placid and the view was mesmerizing. All the miles we had traversed and the all the pain on the way was worth it. Small hillocks and dense forest guarded the dam on the edges. We were never truly satisfied with the serenity of the dam.

It was time to head back and we were all were tired and hungry. Deepak Dai came to pick us up. Rap session entitled “Kulekhani” from Krishna and Sawan was refreshing and entertained all of us. We had a delicious fish curry dinner in a hotel at a place called Kakani by the dam. Silly jokes from Surya, Kishor and Krishna helped in creating some more laughter while we dined. It was already dark outside, so right after having our dinner we headed towards Kathmandu. This was a very beautiful and memorable hike. The fellow team members were really amazing and candid. The hike came to an end but the memories attached to it will always be cherished.

8 thoughts on “Hiking from Thankot to Kulekhani”